Two hungry goats are tied together with a chain. Whenever one tries to walk toward a lush and leafy bush, it is held back by the other trying to walk to a similar bush in a different direction.

This image helped encourage discussion at a filled-to-capacity Catholic Relief Services peacebuilding workshop recently held in Bangui, Central African Republic. Catholics, Protestants and Muslims are part of the civic dialogue taking place in the workshops, even as conflict still cripples parts of the country. 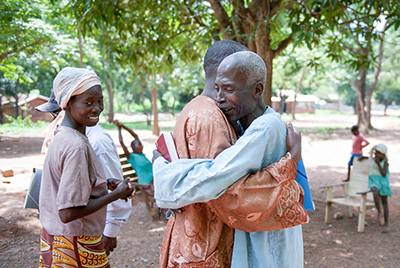 CRS and our partners hosted a day for religious leaders to pray with internally displaced persons in Bangui, Central African Republic, where CRS holds regular workshops to foster peace and reconciliation. Photo by Catianne Tijerina for CRS

The goats are a metaphor for the ongoing battles over control and revenge in Central African Republic.

Unarmed civilians have been caught in the crossfire of horrific violence since late 2012 when the mostly Muslim rebel alliance Seleka staged a violent overthrow of the government. The civil militia anti-balaka, a group of mostly Christian fighters, banded together to defend their communities and avenge killings by the Seleka. "It came over us like a wind that swept the country and swirled us around. The wind has tried to divide us," says Kozo Simplice-Desire, a participant in one of the CRS workshops aimed at reconciling faith communities in CAR.

"When two sides are fighting, it's really CAR that is the victim," he says. "It has prevented us from developing. I hope that by the end of the workshop, everyone will be committed to the peace process."

Since early 2014, CRS has been hosting workshops like the one in Bangui for nearly 300,000 community leaders of all faiths, including young people, women and members of civic institutions. They receive training in peacebuilding tools that will help them manage difficult discussions about reconciliation. The work continues the campaign of CAR's three religious leaders of the Interfaith Platform who have worked together since the conflict began to spread the message that conflict in CAR has nothing to do with religion.

"People have been manipulated by those who want to use religious differences to divide the population," says Whitney Wilding, a CRS program manager in CAR. "We see that there's really a transformation that takes place in each individual during the training."

'You have to come together' 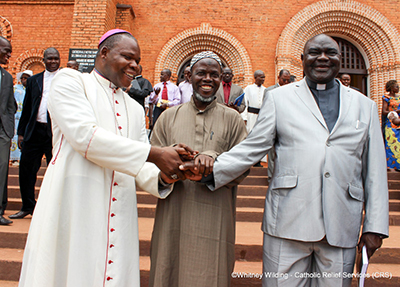 Ousman Mahmat, a Muslim lawyer from Bangui, says the first day of the workshop was tense but, later, tensions eased.

"The people here have come together. We've learned that you have to accept other people's differences. We learned that we're all the same but people practice our own religions," Ousman says. "There have been different tools we have learned. What impressed me greatly was the image of the two goats. It's teaching people that you can't go different ways. You have to come together."

Ousman is one of few Muslims still living in Bangui. Most fled the country as the anti-balaka gained the upper hand, including the woman Ousman hoped to marry.

"This crisis has had an enormous impact on my family and my life," he says. "My mother, my father and all my brothers fled to Cameroon. I'm the only one left. I can't just leave our properties. Our roots are here."

A Muslim mother at the workshop said that life has gotten much harder since the conflict. "Too many children have been orphaned. Their parents have died or fled to Chad or Cameroon."

Not knowing how to move forward with her life—her son had been killed by anti-balaka just days earlier—she heard of the workshops and signed up.

"I knew that I could find a solution here. I'm grateful to CRS for the workshop and recommend approaching different parties of the conflict and bringing them together," she says. Despite her loss, she found the strength and courage to join the interfaith workshop and start working toward forgiveness and peace.

As for the goats, they continued to struggle for food from the two bushes until they had no strength left and were about to give up. Then they realized that if they both walked in the same direction, they could easily reach one of the bushes together so they could both eat and survive.

"We're victims of a crisis. People have lost a lot but we haven't had the tools we need to know how to end the crisis," says Kozo. "This is why this workshop is so important: to give us the tools to end the crisis and continue with the development of the country. I'm very happy to be together with our Muslim friends."