In Rwanda, a child’s nutrition is traditionally considered the mother’s responsibility. That changed for Baramenya Léonce as he watched his son recover from severe malnutrition. Helping save his child only strengthened his resolve to help others do the same.

Baramenya says his son, Jean Pierre, often fell sick and did not gain weight. His family would seek traditional treatments but the child never fully recovered. 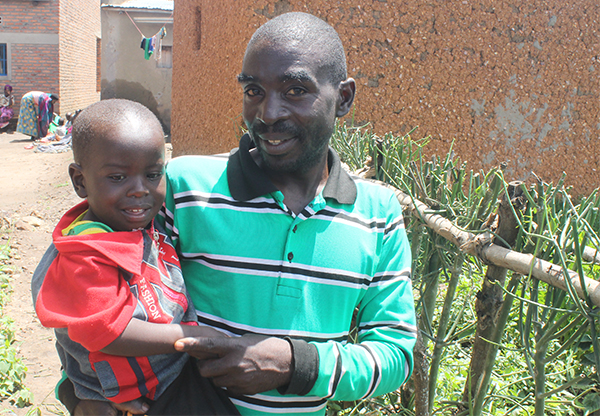 Nothing changed until Baramenya was introduced to Gikuriro, a CRS project in partnership with SNV-Netherlands Development Organization and funded by the U.S. Agency for International Development.

When the Gikuriro field staff and community health workers visited Baramenya’s family, they realized Jean Pierre was suffering from severe malnutrition. They asked his parents to bring the child to the health center.

They treated Jean Pierre at the health center for two weeks. Meanwhile, staff asked his parents to join the Gikuriro Village Nutrition School. Once Baramenya and his wife, Petronille, began attending the school, Jean Pierre was enrolled in the 12-day intensive rehabilitation program designed for mothers who have children in moderate malnutrition. The moms meet daily to cook a balanced diet, feed their children and learn how to continue the practices at home.

After the 12-day program Jean Pierre had recovered from severe malnutrition. His parents were determined to work to raise a completely well-nourished child.

Baramenya and Petronille participanted in all aspects of the Gikuriro program, including the Village Nutrition School, the Community Health Club, a local CRS Savings and Internal Lending Community and a CRS Farmer Field Learning School.

In the field school, they learned to cultivate vegetables using various techniques suitable for family gardens. 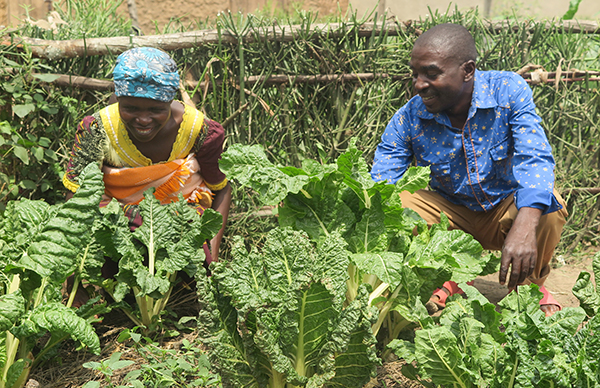 Baramenya Leonce and his wife, Petronille, work in the fenced kitchen garden where the family cultivates vegetables for a balanced diet. Photo by Emma-Claudine Ntirenganya/CRS

Baremenya, the father who once attended the Gikuriro Village Nutrition School to learn how to help his son recover from malnutrition, is now  a “Papa Lumière,” a parent role model, leading school activities like cooking demonstrations and sessions that monitor children’s growth.

What impressed and inspired Baramenya most is that Jean Pierre recovered from malnutrition using what they already had at home.

“I was blown away by the quick recovery of my son,” Baramenya says. “I can attest to how a child is rehabilitated from malnutrition in only 12 days when you follow advice that you have been given by the Lumières.”

The Gikuriro program is designed to help vulnerable families with children under 5 years old, and nursing and pregnant mothers learn about nutrition and water, sanitation and health, and the best practices to fight malnutrition.

Baramenya adopted what he learned in field school by fencing his garden to make sure animals do not eat the family’s vegetables. Now his garden mirrors plots that are used by the Farmer Field Learning Schools.

“Today, I give testimony to other parents about how to eliminate malnutrition. I have become a role model, especially for the gardening techniques,” Baramenya says. “They come to learn from me!”

August recess is a key moment to meet with your members of Congress while they are out of session... END_OF_DOCUMENT_TOKEN_TO_BE_REPLACED

Use this calendar for key dates to reflect and take action with your community to address climate... END_OF_DOCUMENT_TOKEN_TO_BE_REPLACED