Coping With Trauma in South Sudan

Like many men in South Sudan, Peter Mothi carries a Kalashnikov automatic rifle, or AK-47. But Peter’s rifle is just four inches long—a miniature model shaped from the clay soil of Pibor, South Sudan, which is home to the Murle people.

And unlike a real AK-47, Peter’s is used as an instrument of peace. 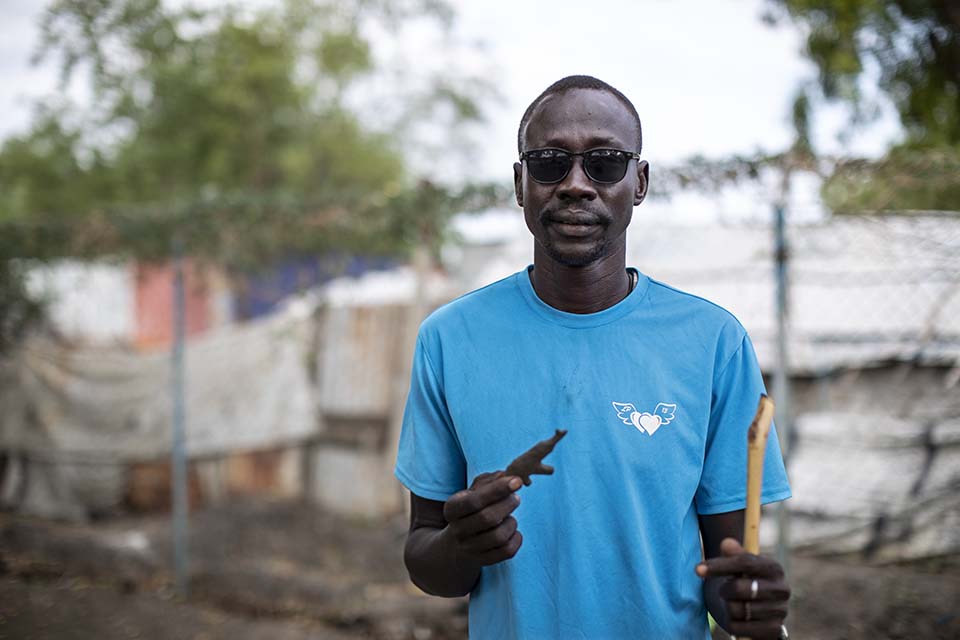 “This is the great enemy to us now, the enemy that is killing so many people in this land,” Peter says, holding up the tiny replica in front of a group of young men in Pibor—attendees at a meeting to address trauma awareness. “Not only the Murle, but all South Sudanese. We are all traumatized because of guns.”

Despite various peace agreements and frequent overtures toward reconciliation, decades of conflict between the Murle, Dinka and Nuer ethnic groups in Greater Jonglei have taken a heavy toll, resulting in an epidemic of trauma and greatly damaging community relationships. At the same time, the Murle have also seen fighting between age groups of men, known as age sets, within their own community.

In Murle culture, men and boys are categorized into age sets, with each cohort spanning 10 to 15 years. According to tradition, eventually a time comes for the youngest age set to challenge the next eldest group in order to assume responsibility and power. This includes the right to marry and arrange marriages, as well as defend their communities from outside attackers. But such privileges are not taken without a fight. 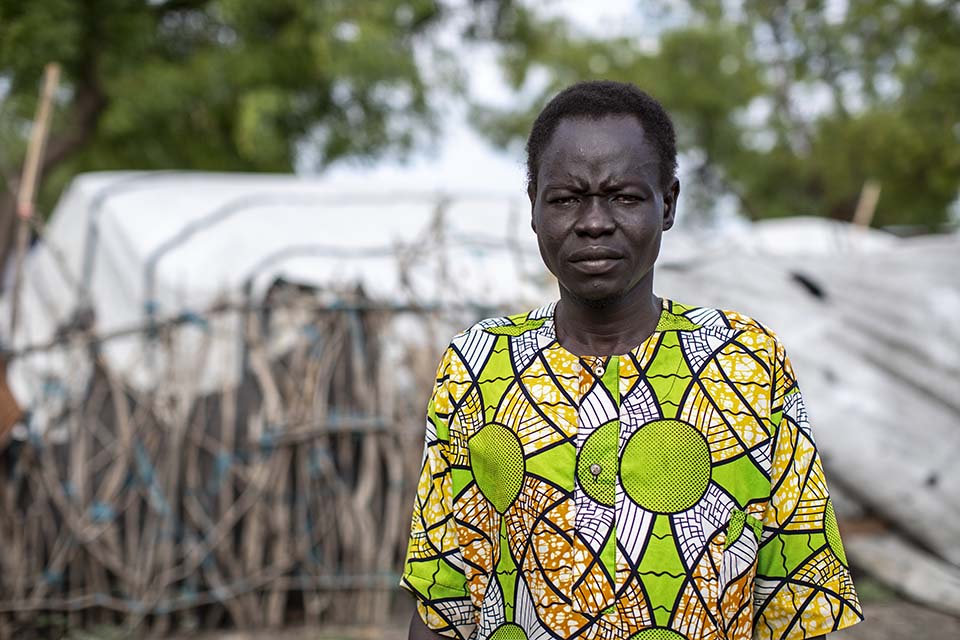 Jowang Karar participates in a program that integrates social cohesion and trauma training into livelihoods and resilience activities that build individual and community capacity to manage stress and reduce conflict.

According to Peter, who is 43, the widespread use of modern assault rifles to settle age set disputes is a product of the times. “The reason our boys are fighting using the gun is that they learned from the older generation,” he says, referencing the culture of cattle raiding, abductions of women and children, and the recent civil war. “That is the time when these young men were born. They were born into a very bad environment. They learned from their fathers and as they grew up they developed trauma.”

Peter is part of a group of men who took part in a series of trauma awareness and social cohesion trainings aimed at engaging unemployed youth in Pibor. These trainings are being carried out across Greater Jonglei as part of a resilience and food security program, which is funded by the U.S. Agency for International Development’s Bureau for Humanitarian Assistance and implemented by Catholic Relief Services. The program helps young people cope with the impacts of trauma, teach self-healing, and foster social cohesion within their communities.

Before guns became so prevalent in South Sudan, the Murle employed less violent means to settle disputes between individuals and age sets. Traditionally, they would settle arguments by wrestling. This then evolved to fighting with tamarind switches, before moving to fighting with long sticks that are often more than an inch thick, to eventually taking up the gun. Most are AK-47s, which are relatively cheap and easy to buy.

Now community leaders like Peter and Nyeriza are working to change what they call the culture of the gun in the Murle community. When conflicts arise, they intervene quickly to calm the situation. 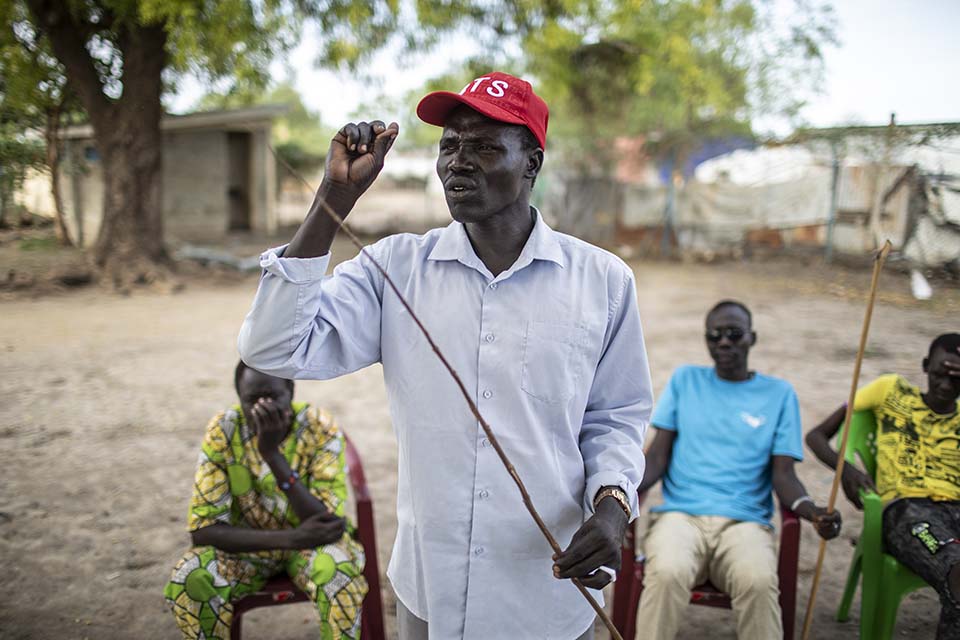 Nyeriza Nyel, center, holds a switch made from tamarind while he talks about how the Murle evolved from settling disputes through wrestling, to fighting with tamarind switches, sticks and eventually, guns.

Recently, a group of young men raided some cattle from the Gawar community. “Our chiefs were running straight away to collect the cattle and say the cattle should be taken back,” Nyeriza says.

It is not easy to convince young people to resolve matters non-violently, but they are seeing some progress.

“If you have good leadership qualities, you can approach them and talk to them,” Nyeriza says. “First it was very hard to change their minds, but in the end we have managed. They listen because they respect us.” In this case, the young men apologized to the elders and returned the cattle to the Gawar.

“We have really seen positive changes,” says Nyeriza. “We have a different mindset. Imagine, people are trying to stop us from fighting and we won’t listen which is very bad. For us who were trained, we realize we are practicing bad things and we have to stop. We want to go back to our good culture and fighting with these small sticks, or even wrestling like our ancestors.”

Alexander Etcho, a social cohesion project officer for the program, believes the it could be even more effective if unemployed youth were approached at the district level, and invited entire age sets to take part in the training. 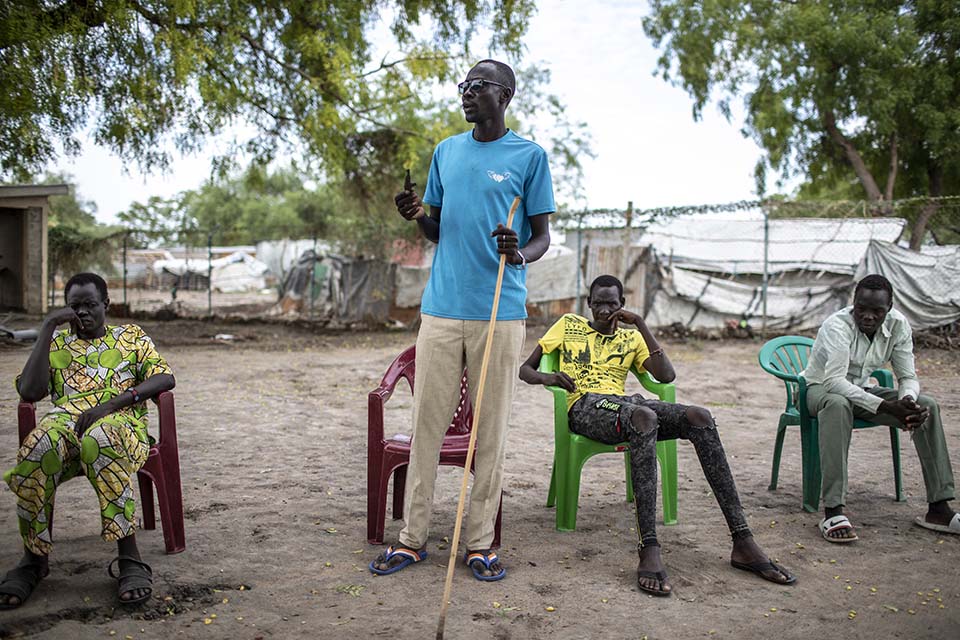 “If we just select one person from each side or three from each side, it will not be helpful. If we select 25 youth, they should be only from one district. We bring 12 from one age set and 12 from another age set, and if we train them together it will be helpful, and they can understand better rather than selecting one or two persons per district and training them [the way we are now].”

“Age sets are the conflict actors. They are the ones raiding cattle from neighbors, they are the ones engaging in child abductions. Elders and the other people, they don’t engage in these practices. Of course, we can train the chiefs because they are the key people who are approaching the age sets. But age sets are the real people who need more training on trauma awareness and social cohesion for us to make change,” he says.

“We know how they arrange themselves in their age sets. We select the leaders of the age sets. We also choose those who engage in harmful practices,” he said. The latter are identified discreetly through the chiefs and are not told why they are selected.