We have a really cool little story coming up about Catholic kids. You won't want to miss it. But first….

A key principle that Catholics carry with them when venturing to help poor and vulnerable people is independence. The Church's teachings on social justice takes care to avoid causing dependency when giving our poor brothers and sisters a hand up. 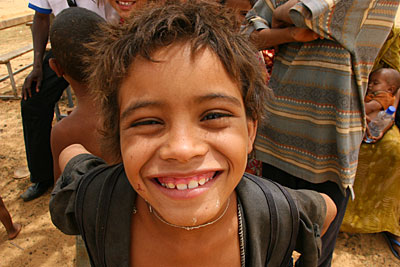 The children at the Fererio camp in Burkina Faso still play and laugh, showing us just how resilient they are. Photo by Helen Blakesley/CRS
Catholic Relief Services designs our programs to promote independence. In work with microfinance, the principle is obvious: We help people learn to save and gain financial independence. In other work, the principle abides. It is so ingrained in our own guiding principles that we abide too: We remain at our brothers and sisters' side until the work is done. Independence comes over the long haul.

That's so clear in Sudan and South Sudan. For years, with peacebuilding and other emergency aid, the Church remained alongside the Sudanese. Last year, the southern Sudanese first voted for and then—on July 9—marked their independence from Sudan. We celebrated their joy and wept with them over the sorrow of dividing their country.

We remain with the people of Sudan; Darfur, in western Sudan; and South Sudan. Political independence did not vouchsafe peace. Only peace can vouchsafe true independence. The Church will remain at their sides.

We likewise remain with the people of the Sahel of West Africa. Through CRS, the Church—again, for years—has supported people in this semidesert region. Today, as those in the Sahel face long-term drought, an influx of refugees and dwindling resources, we seek to strengthen our efforts on their behalf.

In East Timor, we pray and yearn for your prayers for peaceful elections. After South Sudan, East Timor is the world's second youngest country.

And now, the kids. We at CRS have many opportunities to see your kids in action, and we probably don't share those stories enough. Your children's generosity is overwhelming and touching and encouraging. Their spirit is instructive and humbling. Please check out this story about Catholic kids who were moved by the KONY 2012 video to help strangers whose names they will never know, but whose lives they have touched as deeply as they have touched ours.

A prayer asking God to help us recognize family in each of His children, to know them as brothers... END_OF_DOCUMENT_TOKEN_TO_BE_REPLACED