During the summer of 2015, CRS allocated $4.5 million in private funds to the Coffeelands Program. It was a first for us — invest to specialize in a single value chain. We chose to start the process of specialization with coffee.

Why coffee? Because it turns out that a thriving coffee sector is good development — it fosters social stability and inclusion, economic prosperity and environmental sustainability in an era of accelerated climate change.

Coffee is one of the world’s preeminent smallholder cash crops. More than 2 of every 3 pounds of coffee are produced by smallholder farmers.

The definition of “smallholder” varies, of course, from one country to the next.  For example, massive Brazil considers growers with up to 20 hectares (1 hectare = about 2.5 acres) to be small-scale producers while most growers in tiny Burundi and Rwanda tend “coffee gardens” with just a few hundred plants.

Our programming in the coffee sector has focused almost exclusively on farmers who cultivate less than five hectares, and often significantly less.  In the region of southern Colombia where we implemented the Borderlands project, the average area planted in coffee was 0.9 hectares. In Eastern Congo, cooperatives measure the coffee holdings of members in plants, which often number less than 100.

Poverty is the norm 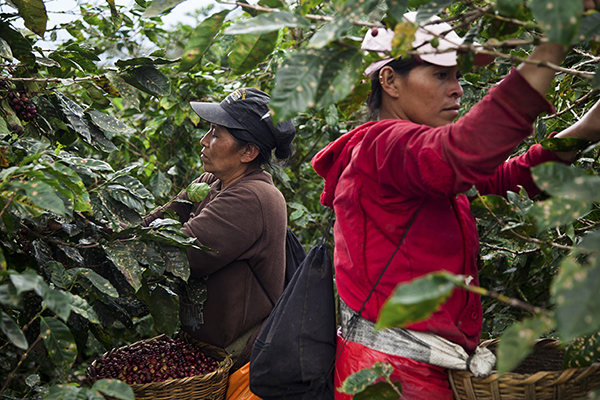 Even for smallholder coffee growers whose farms are located in coveted coffee origins or whose cooperatives are competitive in international markets, poverty is the norm.

Research commissioned by Keurig Green Mountain and conducted by our partners at CIAT in Central America beginning in 2006 showed that even growers in long-term trading relationships whose coffee earned more as double-certified Fair Trade and organic were poor and hungry. They suffered 6 – 8 month of economic hardship and reduced diets after the coffee income ran out.

Baseline data from our Borderlands project in Colombia tell a similar story: more than 60% of the growers in Nariño were living below the poverty line.

Most coffee growers, in other words, are our kind of people—poor, vulnerable and marginalized. And globally there are more than 10 million smallholder growers.

Estimates suggest that 800,000 people in Ethiopia grow coffee, 800,000 in tiny Burundi, 560,000 in Colombia, another 500,000 in Centeral America and 400,000 in Rwanda.  Since so many of the countries producing coffee are coping with political and social upheaval, a thriving coffee sector is an important contributor to social stability around the world.

In Ethiopia, khat production and trading offers the promise of easier money than coffee, which requires a painstaking focus on quality and is increasingly under threat from climate change and related increases in pests and diseases.

In Central America, participation in transnational criminal enterprises that traffic in drugs, arms and people exerts a strong pull on young people in the coffeelands. Many see bit roles in these underworld enterprises as more alluring than the hard work of coffee farming.

And in Colombia, coca is often intercropped with coffee, many times at the behest of armed actors, meaning that coffee growers must cope with the violence the drug trade invariably brings to their communities.

That’s what the farm owners face. Farmworkers who depend on wages earned from the annual coffee harvest number in the tens of millions worldwide and represent the largest and most vulnerable group of coffee supply chain actors. 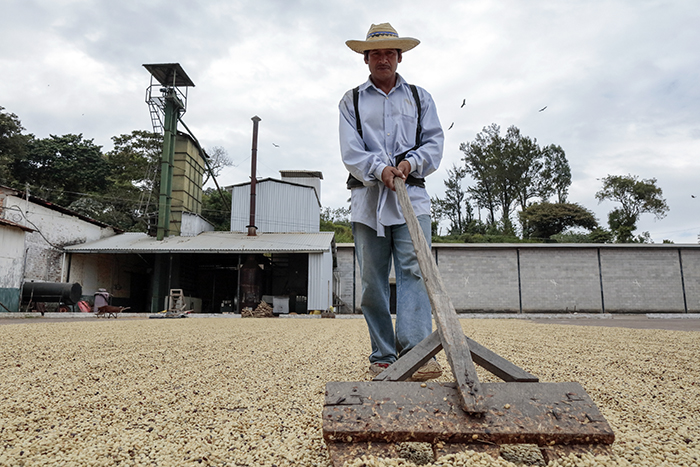 A worker tends a coffee drying patio in El Salvador. Photo by Oscar Leiva/Silverlight for CRS

Given this context, coffee is generally the number-one licit livelihood option for smallholder growers and farmworkers — the leading contributor to both social stability and economic prosperity.  If the coffee sector were to collapse in any one of these countries, the economic and social fallout would be calamitous.

But coffee’s principal value may be environmental.  Coffee is a shade crop that thrives in the understory of a diverse forest canopy. In countries whose landscapes are highly degraded, like El Salvador and Haiti, the few remaining forests are coffee forests—coffee farming and the income it generates represent the number one bulwark against deforestation and environmental degradation.

Coffee has the potential to be a “hero crop” that contributes to social stability, economic prosperity and environmental sustainability in an era of climate change.

Why is the specialization strategy embodied in the Coffeelands Program the best approach to mitigate threats to the coffee sector and help coffee fulfill its promise as a hero crop?  There are several reasons, starting with our own capacity. 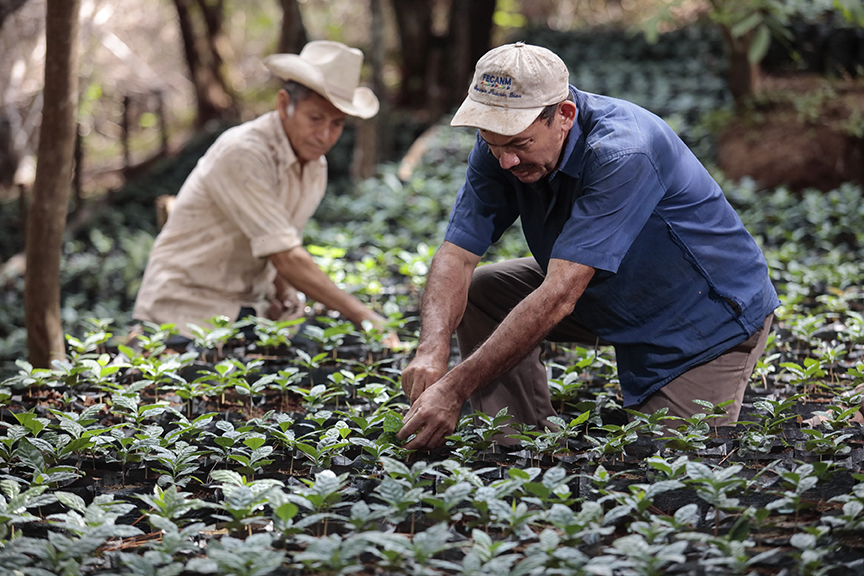 A simple “coffee inventory” conducted in 2015 revealed that CRS has been engaged in coffee programming across two divisions for thirteen years.  Counting the CRS Ethical Trade Program in the United States, our coffee footprint spans fifteen countries.  To date, we have implemented twenty projects worth more than forty-seven million dollars benefitting fifty thousand farmers.  If we include their families, our coffee programming has reached nearly two hundred fifty thousand people.

CRS has earned a reputation for leadership in the coffee sector based on its track record of delivering positive impacts on the lives of thousands of smallholder coffee farmers and their families over more than a decade.  In other words, we didn’t decide to specialize in coffee as much as we decided to invest to maintain the specialization we had already developed.

While the scope of our coffee programming has been impressive, all the numbers generated by our “coffee inventory” now need to coalesce in one cohesive effort.  Our 20 projects have not talked to each other in any sustained way across regions or countries over the past 13 years.  And while we delivered real benefits to large numbers of people in need, we now need to leverage those investments for learning, continuous improvement, program quality, impact and scale. 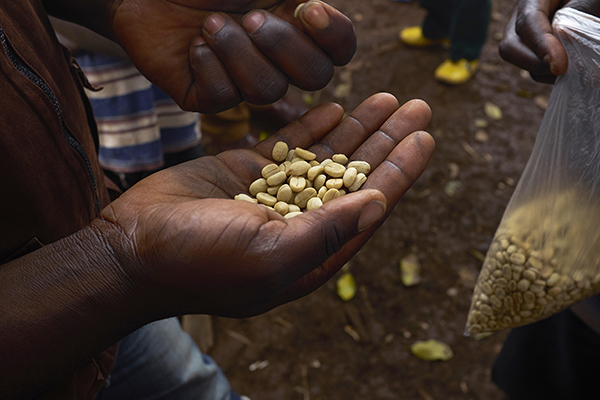 With business training, improved cultivation techniques and access to international markets, growers in South Kivu, Democratic Republic of Congo have seen profits more than double from sales of their coffee beans. Photo by Sam Phelps for CRS

The Coffeelands Program invests to do that by developing a shared vision and unified approach for our programming in the coffee sector, articulating that vision in a clear voice, identifying a small number of key performance indicators that are embedded into our MEAL systems for CRS coffee programming globally so that we can aggregate data across countries and projects into a single database.  Success in this enveador will serve a range of important objectives, improving knowlege management, learning, program quality and impact.

The Coffeelands Program will also position us to more effectively serve our mission, given coffee’s economic importance for millions of people around the world and to the fortunes of fragile ecosystems around the world.

Coffeelands can contribute to lasting impact at scale in the coffee sector.

The precursor to, and strong indicator of a commitment to the coffee value chain, is our Borderlands Coffee Project in Colombia. The project delivers direct support to 1,600 farmers in Nariño, Colombia.

But the region is home to nearly 40,000 smallholder coffee growers. That’s  in a country with 560,000 growers.  At a global level, CRS has reached 50,000 farmers. But estimates suggest there are as many as 25 million coffee growers worldwide.

The Coffeelands program promises to help CRS achieve lasting impact on a far larger scale in the coffee sector.

This the first of a four-part Coffeelands series. Part 2, Part 3, Part 4

The latest on Coffeelands

Op-ed pieces and letters to the editor in your local press amplify the issues you care about and... END_OF_DOCUMENT_TOKEN_TO_BE_REPLACED

Each year, Congress negotiates how to spend U.S. taxpayer dollars through a process called... END_OF_DOCUMENT_TOKEN_TO_BE_REPLACED

The Global Child Thrive Act passed into law in January 2021. This law directs the administration... END_OF_DOCUMENT_TOKEN_TO_BE_REPLACED