This third of a four-part Coffeelands series (Part 1, Part 2, Part 4) looks at livelihood diversification, labor, research, and introduces influence, which is covered in more depth in part 4.

CRS has learned over the years that smallholder growers cannot live on coffee alone.  That’s why our coffee value-chain projects always include investments in complementary activities designed to help growers boost their resilience by diversifying farm production, income sources or both, preferably in ways that are compatible with coffee-based agroforestry systems.

In the field, our coffee projects include investments to increase production of nutrient-rich foods for household consumption, cash crops for the market, or both.

We have also worked with industry allies like Keurig Green Mountain to raise awareness in the coffee industry of the prevalence of poverty and hunger in coffee supply chains, the dangers of overreliance on coffee income and to advocate for greater investment to help coffee-growing families meet basic human needs.

The Coffeelands Program prioritizes issues related to farm labor in the coffee sector.

Our consistent collaboration with coffee companies as part of a value-chain approach is a comparatively new discipline for CRS as part of the universal Catholic Church.  A more traditional role is to protect weak actors in the global economy, 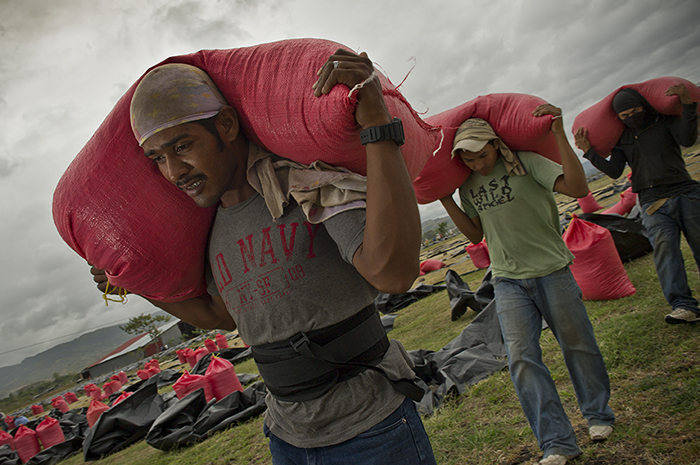 Workers in Nicaragua carry bags of coffee beans into the factory for processing. Photo by Karen Kasmauski for CRS
especially workers, from the excesses of an unfettered marketplace.

Indeed, Catholic Social Teaching emerged from the Church’s concern about labor rights during a period of accelerated industrialization in the late 19th century.  Labor may be an old issue for the Church, but it is a new issue for CRS Agriculture and Livelihoods programming generally and the coffee sector specifically.

We were awakened a few years ago to the disconnect between our mission to serve the poorest and most vulnerable people in the world and our engagement in the coffee sector—our work in the coffeelands has focused on smallholder growers who are structurally disadvantaged in a global marketplace that rewards efficiency and scale, but had mostly ignored the tens of millions of farmworkers who represent the most numerous and most vulnerable actors in coffee supply chains.  We were not alone in our “farmworker blind spot,” as most of the investment in sustainability in the coffee sector over the past quarter-century has also focused on smallholder farmers, including public donors like DFID and USAID, foundations including the Bill and Melinda Gates Foundation and the Howard G. Buffett Foundation and corporate donors like Keurig Green Mountain, Nestlé and Starbucks.

Since 2013, we have been working to narrow our knowledge gap on farm labor, engage more intentionally with farmworkers and focus the attention of industry leaders on issues related to farm labor.

Work on slave labor in Brazil’s coffee sector has been just the thin end of the wedge.

Our journey on farmworker issues began in Brazil in the summer of 2013 when we discovered a list of 15 coffee estates found by inspectors at Brazil’s Ministry of Labor to be employing workers under what the country’s laws call “conditions analogous to slavery.”  The revelation began a multi-year process of research to better understand the working conditions on these farms, the root causes of modern slavery in Brazil’s coffee sector and advocacy for deeper coffee-industry engagement in Brazil’s campaign to eradicate slave labor.

That work culminated in a policy brief co-authored by a longtime CRS partner Reporter Brasil.  CRS released the brief in April 2016 and presented its key findings to a leading industry audience in the United States.  We are working currently with Reporter Brasil and allies in the Brazilian and U.S. coffee sectors to explore opportunities for collective engagement around this issue in Brazil.

But work on slave labor in Brazil’s coffee sector has been just the thin end of the wedge.  At the broad end are our efforts to improve conditions for farm labor in the coffee sector, which to date have focused on public-facing communications and more discreet private engagement with coffee-sector leaders. 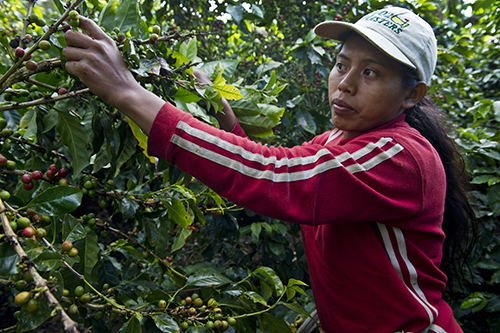 Lijia Martinez picks coffee as a seasonal worker in the San Jose area of Nicaragua. Photo by Karen Kasmauski for CRS

Over a period of more than two years, from early 2014 to early 2016, CRS became a leading voice for farmworker engagement and inclusion through posts to the CRS Coffeelands Blog and articles in leading industry publications, including Farmworkers in the Coffeelands that appeared in the January/February 2016 issue of Roast Magazine.

CRS has also worked behind the scenes to influence industry leaders and move them toward deeper engagement on the issue.  One important venue for this influence work has been the Sustainability Council of the Specialty Coffee Association of America (SCAA), on which CRS has served in a volunteer capacity since 2012.  The decision of the Council in June 2015 to create a dedicated Farmworker Committee was largely a result of continuous CRS advocacy within the Council and with senior leadership of the SCAA.  CRS currently chairs that committee which produced an issue brief titled A Blueprint for Farmworker Inclusion that was distributed to members of the world’s largest coffee trade association in April 2016.

Moving forward, the Coffeelands Program will work with the Sao Paulo-based human rights organization Repórter Brasil on a second phase of its work on slave labor in the coffee sector. We’ll combine additional research with industry engagement to build a platform for collective action involving Brazilian coffee companies and their U.S. trading partners.

CRS will also work with the Massachusetts-based labor rights organization Verité to apply its innovative research methodology to farm labor in the coffee sectors of important specialty coffee origins in Africa and the Americas.

The Coffeelands Program includes robust investment in research partnerships to improve monitoring, evaluation and impact, to generate actionable insights for our programming in the field, to inform decision-making and to support the program’s influence agenda. 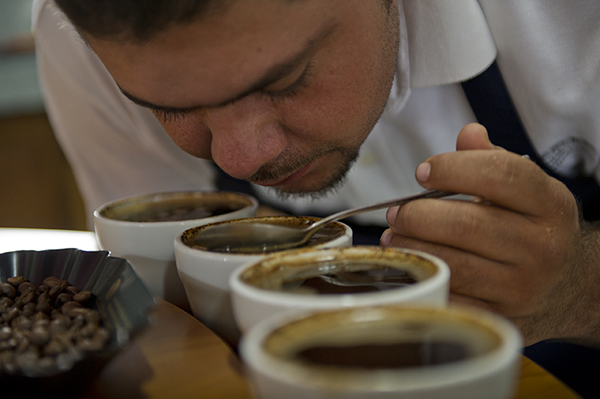 Ivan Quintel performs a sensory test called “cupping” to test the quality of various coffees.
The Coffeelands research program is built around two core partnerships that will advance the overall goals of Coffeelands.  The first of these is with CIAT.

Agroenterprise has been the centerpiece of our longtime collaboration with CIAT (International Center for Tropical Agriculture).  Our collaboration on the Coffeelands Program will expand on that topic to promote market linkages and business model innovations.  Those areas of collaboration remain at the center of the CIAT relationships, with the addition of workstreams on impact assessment and climate change.

The second core research partner of the Coffeelands Program is World Coffee Research, an industry-driven platform housed at Texas A&M University working to “Grow, protect, and enhance supplies of quality coffee while improving the livelihoods of the families who produce it.” Through collaboration on two separate stand-alone projects with WCR over the past few years, we have found deep alignment around a broader range of activities that advance shared objectives.

In the Democratic Republic of Congo, CRS and WCR collaborated on Kahawa Bora Ya Kivu (KBYK), a value-chain project designed to build a specialty coffee sector in the conflict-affected Eastern Congo.  This collaboration included seed distribution, soil amendments to boost fertility and field trials to test different intercropping strategies and assess their effects on productivity. 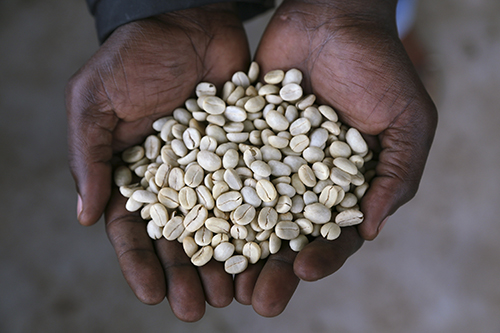 "Kahawa Bora Ya Kivu", or KBYK, project aims to expand high-value market opportunities and reduce vulnerability to hunger and environmental degradation for 6,000 smallholder coffee farmers in the Democratic Republic of Congo. Photo by Michael Stulman/CRS

The KBYK project also supported WCR’s International Multi-Location Variety Trial (IMLVT) in the Eastern Congo.  The IMLVT is testing 35 leading coffee varieties in 19 coffee-growing countries around the world in partnership with local coffee and research institutes.  The trial will measure the performance of all varieties in local conditions across a range of variables, including plant vigor, productivity, resistance to pests and diseases and cup quality.  The best performing varieties in each country are being identified, multiplied and distributed to catalyze the expansion of local coffee sectors around the world and ensure a solid genetic base for coffee production. In the DRC we collaborated with WCR and the local research center INERA to support the start-up of the IMLVT in Eastern Congo.

The second was the Colombia Sensory Trial—a rigorous, independent analysis of the two leading coffee varieties in the Colombian Department of Nariño where we implemented the Borderlands Coffee Project.  We worked together with CIAT on the sampling methodology and with WCR on the methodology for both the traditional sensory analysis using the Coffee Quality Institute protocol that represents an industry standard and with an entirely new coffee sensory lexicon that WCR developed together with the Sensory Analysis Center at Kansas State University.  That lexicon was applied for the first time ever as part of the Colombia Sensory Trial.

The global footprint of the Coffeelands Program positions CRS to partner with WCR on an ad hoc basis to support both the IMLVT and exercises like the Colombia Sensory Trial where appropriate.  There are two other WCR initiatives that support Coffeelands Program goals and will form the basis of our global partnership: on-farm trials and decision-support related to varietal selection.

The core value proposition of fieldwork in coffee lies in increasing farmer capability.

WCR’s Variety Intelligence initiative is designed to support farm-level decision-making on which coffee varieties to plant and why.  Starting in Central America, WCR will produce variety catalogs that provide scientific data on which environments and management regimes are best paired with specific varieties.  They will report on yields, optimal elevation, optimal shade level and cup quality for some varieties that are readily available locally and others that aren’t but should be.  CRS is an ideal partner for “last-mile” delivery of these catalogs as part of our broader capacity-building and decision-support efforts.

CRS is also partnering with WCR for on-farm variety trials that complement the IMLVT with 60 -100 ½-hectare demonstration plots in different agro-ecological zones of the country.  WCR delivers seed and supervises planting, fertilization and all aspects of management while setting up a weather station on each farm.  Most of the varieties involved are disease resistant. CRS field staff will provide ongoing support and data collection services.  For its part, WCR asks for only a few samples of each variety each harvest for molecular and sensory analysis.  Participating growers keep the proceeds from the sale of coffee from these plots.

Influence for lasting impact at scale

An explicit effort to exert Influence for impact at scale is central to the Coffeelands Program vision.

The innovations and advances we foster with our projects may deliver positive impacts, but they are unlikely to achieve scale or be sustained over time if they are not linked to private-sector practices and/or public policy.

Our colleagues at CIAT like to talk about the interplay of three elements that contribute to favorable outcomes in smallholder agriculture: capable farmers, willing buyers and an enabling environment.

The core value proposition of fieldwork in coffee lies in increasing farmer capability—improving smallholder farming practices, strengthening smallholder enterprises, and expanding access to inputs, services and markets.  Our value-chain approach and our Advisory Council bring capable farmers together with willing buyers to foster trading relationships based on mutual commitment to transparency, quality and value.  But when those efforts are undertaken in an environment in which public policy does not actively support those activities, the gains our projects create are vulnerable to backsliding and are less likely to achieve and sustain scale.

The Coffeelands Program’s emphasis on influence is designed to protect and expand the gains achieved through our projects.

Stay in touch with issues in the Coffeelands