The atmosphere outside the health center in eastern Ethiopia crackles with energy, despite the relentless midday heat. Two dozen young men and women are standing in a circle, hunched over notebooks. In the center, a woman uses white chalk to draw lines in the sand while someone else positions small rocks and sticks around the lines.

Students hovering over the scene step back swiftly as the map in the sand takes shape. They look over shoulders and use each other's backs as writing surfaces. Everyone vies for the best spot to see what's happening in the middle. 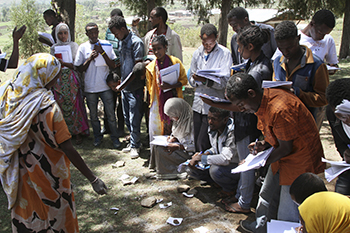 Ethiopian communities are learning to map resources so they can live with climate change, and plan for disasters that cause malnutrition and other problems. Photo by Kim Pozniak/CRS

This is a mapping exercise for a typical village in the Ifabas district, which is experiencing the harsh effects of climate change: recurring drought, water shortages, erratic rainfall and flooding. The group is mapping resources like rivers, streams, stone, rocks and forests.

Community members will then teach their neighbors about climate-smart agriculture and other techniques to reduce the life-threatening impact of changing weather patterns. It's part of a new, 3-year project called REAAP—or Resilience through Enhanced Adaptation, Action-learning, and Partnership—that Catholic Relief Services and its partners have launched to help nearly half a million people.

"Environmental degradation, deforestation and water-supply problems expose most communities to food insecurity," says Belayneh Belete, the program director at Hararghe Catholic Secretariat, who oversees the project. "There are many cases of malnutrition as a result."

"In this area, disaster risks are floods and drought," says Haileyesus Lemlan, a program coordinator who specializes in disaster risk reduction. "The rainy season in the last 30 to 40 years has been fluctuating year after year. We now have a drought every 2 to 3 years. That's been a trend for at least 30 years."

CRS is leading the project—with funding from the U.S. Agency for International Development— working hand-in-hand with communities in six vulnerable "woredas," or districts, in Ethiopia's Oromia State.

On day 2 of the weeklong training, participants learn about agricultural practices like keyhole gardens; nutrition; and food preparation, preservation and storage techniques. The young men and women gathered around the village map have met specific qualifications, including a 10th-grade education, but they were also hired because they live in the communities that will benefit from the program. They understand the challenges, culture and politics. 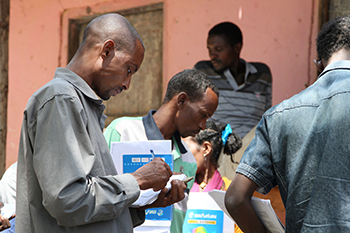 A CRS project in Ethiopia helping communities tackle climate change has taught participant Alemayehn Ayele that "we can solve our own problems." Photo by Kim Pozniak/CRS

"I was born and raised in the community and I have acceptance," says Akuri Worku, a mother participating in the training. "They know what I can do. It won't be difficult. The job ad said the candidate had to be from the community. I'm very happy to be working in my own community."

Alemayehn Ayleen was selected from more than 60 applicants. He is responsible for mapping villages, including determining the existence and location of resources such as forests, water, springs, health facilities, schools, land and livestock. A community committee then identifies the most vulnerable people in the community and how to use village resources in ways that benefit everyone equally.

By day two, Alemayehn has learned how to work with program staff and his community help manage resources and cope with climate change.

"Before the training, I thought only the government or humanitarian organizations can solve communities' problems, but now I understand that we can solve our own problems," he says with a confident smile. "I also understand that disaster or risks may vary from community to community. Before I thought it was all the same."

"We use a community-driven approach: From the bottom up is our basic principle," says Lemlan. "But we need the support of local government for the project to operate smoothly. We've had close relationships with local government since the beginning."

"My community has traditional knowledge. They didn't know how they can use this knowledge to plan better. But with what I've learned here, I can show them the way," Worku says. "We have to teach the next generation—my child—the knowledge of how we can address climate change. We have to show others, practically, how change can be brought so future generations can learn in a better way."

Pray and reflect with your community on our call to respond to the needs of our sisters and... END_OF_DOCUMENT_TOKEN_TO_BE_REPLACED

Reflect on the impact climate change has had on our planet and pray for the Holy Spirit to change... END_OF_DOCUMENT_TOKEN_TO_BE_REPLACED