The Climate Change Connection: Cashing in on Cacao & Chocolate

Simon Perez might be a simple farmer from the western region of El Salvador but he knows how to hedge his bets.

When coffee leaf rust—a fungus that covers coffee tree leaves in an orange-yellow dust—first reared its head on the low-lying hills where Perez lives, decimating his coffee trees, he decided he was done with coffee. At least for the time being.

“I saw my neighbors have problems, even after they went through the effort of planting new trees,” he said. “I figured I would just wait and see what happened.”
He was right to wait. Six years later, coffee leaf rust has crippled coffee production in Mexico and Central America, causing more than $1 billion in economic damage, threatening the livelihoods of hundreds of thousands of small farmers.
Scientists blame the aggressive spread of the moisture-loving fungus, which has been around since the 1970s, on higher temperatures and increased precipitation.

“As a farmer, you always have to look for alternatives. We have been seeing losses for years and climate change just keeps making it worse.” — Simon Perez

Cacao: Helping Farmers and the Environment

Today, Perez and thousands of farmers like him are opting for a new alternative: cacao, the prime ingredient in chocolate. Cacao is a cash crop with historic ties to the region and the potential to simultaneously help people and the environment. 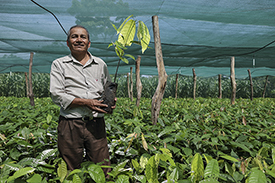 Simon Perez is migrating his primary crop to cacao with help from the El Salvador Cacao Alliance. Photo by Oscar Leiva/Silverlight for CRS

Perez is one of 6,500 farmers Catholic Relief Services is targeting through the El Salvador Cacao Alliance. With funding from the Howard G. Buffett Foundation and USAID, the alliance—a partnership made up of private companies, government and research and academic institutions—is helping to plant cacao on some 16,000 acres in El Salvador.

“Cacao makes sense in El Salvador,” said Gilberto Amaya, who leads the program for CRS. “There are so many advantages.”

The tiny Central American country is the second-most deforested country in the hemisphere after Haiti. Much of its soil is eroded, making it difficult and expensive for cash-strapped smallholder farmers to make a living from their crops. Coffee farmers like Perez have to deal with the added pressure of climate-related pests and fungi, which are increasingly invading altitudes where they previously couldn’t thrive.

“Low altitude coffee in El Salvador is losing competitiveness in a market that prefers higher quality coffee from high altitudes,” said Amaya. “Cacao offers a great alternative for diversification to farmers struggling with higher cost of production and low productivity as a result of the coffee leaf rust. Intercropping coffee and cacao enhances financial viability and reduces the risk for farmers. It is a more attractive proposition.”

As a result of the coffee rust infestation, some coffee farmers started cutting down their coffee trees to grow basic grains like beans and corn or abandoning their farms altogether. In the process, they are destroying what little forest cover still exists in El Salvador. Introducing cacao as an associated crop in a diverse agroforestry system improves biodiversity and sustains income, while allowing the producers to keep their family tradition as coffee growers. 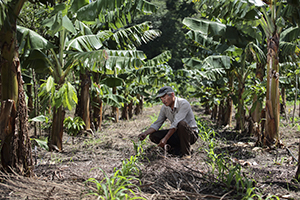 As part of an agroforestry system, Simon Perez is growing a mix of crops that will help increase his income. Photo by Oscar Leiva/Silverlight for CRS

The good news is that cacao can thrive in El Salvador's climate. It is easily intercropped with staples like corn and beans, the mainstay of the Central American diet, as part of an agroforestry system that includes plantains, hardwoods, and fruit trees, all of which diversify farmers’ incomes.

Interspersed with his 1,800 new cacao trees, Perez is growing plantains, avocado, papaya and pigeon peas, some of which he sells on the local market. The extra food and income is helping to tide his family over until the cacao is ready to harvest in about three to four years.

Growing a mix of crops, including cacao and plantains, can be profitable. Farmers in El Salvador can expect to earn, on average, $560 a year per hectare (about 2.5 acres) more than growing coffee alone.

Building national and international markets for El Salvadoran cacao is key to the success of the alliance. The El Salvadoran government has chosen cacao as one of the 10 value chains it wants to develop to fight rural poverty and increase agricultural production.

Worldwide demand and prices for cacao are up and major chocolate producers, from luxury chocolatiers to large corporations, have their eye on Central America.

The alliance has its eye on the fine-flavor business in particular.

El Salvador is not going to produce enough for the bulk chocolate makers,” said Amaya. “We can’t compete on volume so we’re going for the specialty and gourmet chocolate markets.

For now, the alliance and member farmers are talking to target chocolate makers who have expressed interest in El Salvador as an origin to find out what they’re looking for and about how to meet their quality standards so that when the time comes, they’re ready.

But it makes more than business sense for the impoverished country and its farmers to revive the production of cacao, which was once so important its dark brown seeds were once used as currency.

Cacao farms, which can contain about 900 trees per hectare in the most productive regions, imitate natural forest. They can: 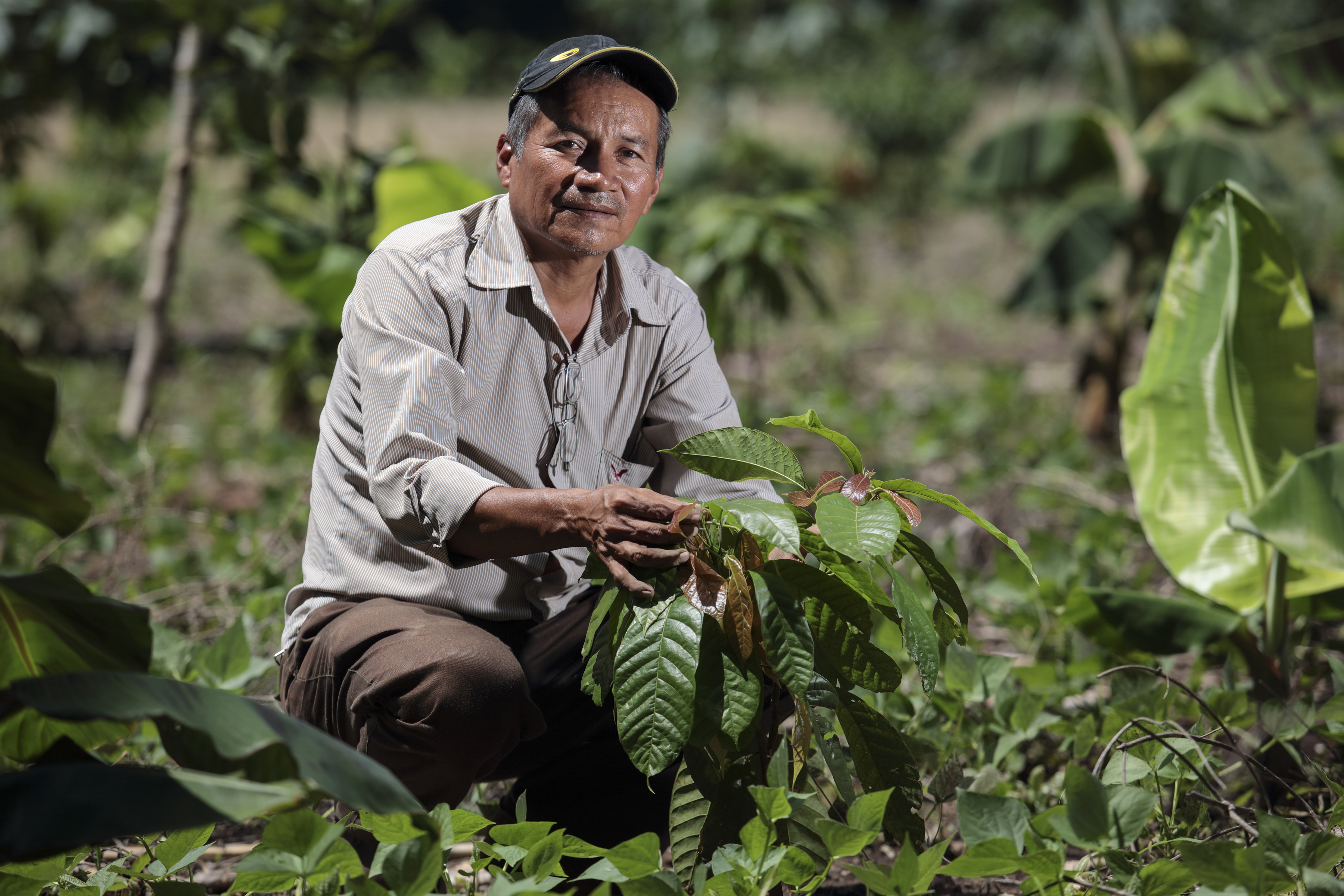 Those are benefits that are not lost on Perez, a 52-year-old father of three.

He admits he was cynical at first about cacao. Aside from drinking a Salvadoran version of hot chocolate, he didn’t really know much about it.

But planting cacao along with the other fruit and hardwood trees on his four-acre plot has taught him a lot about the importance of moisture and soil health.

These days, he uses a lot of the organic material left over from harvesting his crops to make a ground cover that acts as organic fertilizer for his cacao trees instead of chemicals. And he’s conserving his water, which he gets from a well, by using a low-drip irrigation system. His farm serves as a training site for other farmers in his community.

“Little by little we are all falling in love with cacao. We are winning. It is a tree, that is what gives us life.” — Simon Perez

DONATE AND HELP THOSE AFFECTED BY CLIMATE CHANGE

Pray and reflect with your community on our call to respond to the needs of our sisters and... END_OF_DOCUMENT_TOKEN_TO_BE_REPLACED

Reflect on the impact climate change has had on our planet and pray for the Holy Spirit to change... END_OF_DOCUMENT_TOKEN_TO_BE_REPLACED