Child Labor Belongs in a Classroom

The story of Luis Gonzalez Mulul Mendoza is all too common in rural Guatemala. With a fourth grade education, six children and a plot of land too small to provide for his family, he has no prospects of earning a decent living. 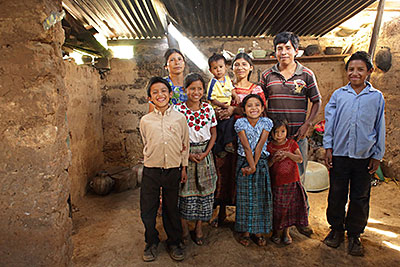 Luis "stole" the little schooling he did receive by sneaking off to class when he should have been tending his family's cornfields. His mother helped him keep his secret by hiding his school uniform under some brush on the family's farm, but she disappeared one day in the middle of Guatemala's violent civil war.

Luis' grandfather, who had never attended school and liked to say that all students are thieves, got wind of the secret and ordered then 12-year-old Luis to go to work.

For many Mayan children like Luis and his father before him, working is a part of growing up in Guatemala, where 75% of rural students drop out before they finish elementary school.

Although the cycle of poverty and marginalization are often passed down to the next generation, Luis, 33, has bigger plans for his kids.

"What they did to me, I can't turn around and do to them," he says. "What I have to do with my children is give them an education."

Catholic Relief Services is helping Luis and his wife, Ana Alicia Tzoy Pu, do just that through a U.S. Department of Labor-funded project that takes a community-wide approach to changing people's attitudes about child labor and the importance of education. 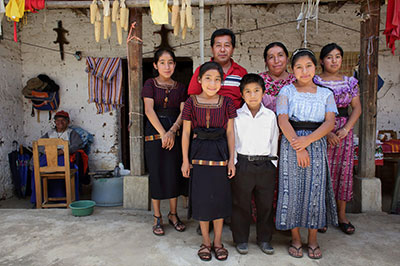 With the help of a CRS project, Miguel Angel Lopez Chan and his family see the value of educating their children, who previously skipped school to work in the family's business in Guatemala. Photo by Silverlight for CRS
From a very young age, children in poor indigenous communities in Guatemala are expected to pull their weight by collecting and hauling water and firewood, cooking, cleaning, caring for younger siblings and tending family farms. Children who work as domestic servants are often exploited physically and sexually.

Although most children manage to work and attend school, they have trouble keeping up academically. Many ultimately drop out because their parents place more importance on domestic tasks than on education.

The CRS project, called My Rights Matter, trains teachers to understand the realities of working children rather than simply view them as problem students. It encourages teachers to make the experience of learning a more rewarding one in ways that recognize the students' rich cultural heritage. They incorporate the indigenous language into their curricula and educate students about the Mayan culture.

Through afterschool opportunities, teachers assist the children with homework and engage them in games and other hands-on activities. Meanwhile, the students learn the importance of civic participation through student governments, which develop and implement school improvement plans with parents' and teachers' help.

In the 2 years since CRS implemented the new teaching techniques at Bernabe's school—the project also provided funding to build a much-needed classroom—Bernabe has learned to read and write in Spanish.

"They teach us lots of things and play games with us," he says. "And they treat us well."

Central to the success of the project is the participation of parents, who form committees within the schools. In addition to carrying out school improvement plans, committee members keep tabs on students and, along with teachers, visit the homes of students who are consistently absent or performing poorly.

"The point is to help develop a more harmonious relationship between parents, teachers and students," says Armando Secaira, who runs the project for CRS. "So we try to bring the school to the home so that parents understand that the teachers care about their children."

It was a visit from Freddy Orlando Saquic, a project coordinator and the teacher of Miguel Angel Lopez Chan's daughter, that finally brought Miguel around to seeing the damage he was doing to his children by making them work so hard in the family's garment-making business.

Miguel, a father of 10 who overcame years of instability caused by alcohol abuse to build his little business, had once expected his kids to thread and operate the industrial machines he uses to sew custom t-shirts and sports jerseys for local shops. When the children weren't sewing, they carried piles of folded clothes, some of them half their size, on their backs up and down the dirt road that leads to the family's small village. It wasn't unusual for them to skip school to accompany Miguel on daylong deliveries to nearby towns.

"I wanted them to know how to do it all, so I gave them hard jobs," says Miguel. "CRS showed us we shouldn't treat them poorly or marginalize them." 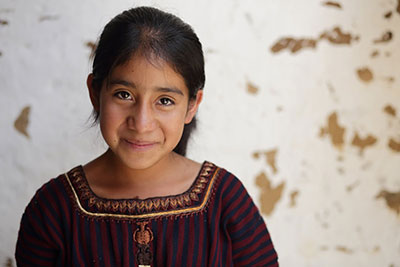 Thirteen-year-old Heidi Mariela Yuvilis 'Yuvi' Lopez Ixcoteyac used to spend much of her time sewing t-shirts for her family's garment-making business in Guatemala. Now, she will be the first in her family to attend middle school. Photo by Silverlight for
In October, Miguel's daughter, Heidi Mariela Yuvilis "Yuvi" Lopez Ixcoteyac, will graduate from the sixth grade. When she starts middle school next year, she will be the family's first to achieve that level of education.

"Now, when I ask her to help out around the house, she tells me she has homework to do," says Miguel. "I realize that she is more committed to her studies, and I don't want her to lose that. I want her to become a professional."

Thirteen-year-old Yuvi, who can list from memory just about every right defined by the United Nations' Convention on the Rights of the Child, wants to become a nurse or psychologist.

"I have to keep going so that I won't suffer one day," she says. "I don't want to regret it—once I'm married—asking myself why we're still suffering like this. I want to prevent the suffering and get an education."

My Rights Matter has changed the lives of more than 9,000 children, like Yuvi and Bernabe, in rural, indigenous villages in Guatemala.