"Now I can find smiles in my home."

Early in her life, Yah Kinnah Ali migrated with her parents from her village of Bouroumbia, in the Lake Province of Chad, to the nearby village of N’Guigmi, just across the Niger border. N’Guigmi soon became like home as Yah married and started a family. But in 2016 violent attacks by armed groups forced Yah to flee back to Bouroumbia in search of safety. With her husband and seven children at her side, Yah returned to find her former community hosting scores of families who also were displaced because of conflict and environmental degradation.

“I saw that my parents' land was overwhelmed from the influx caused by multiple displacements,” she says.

Despite limited resources, the community of Bouroumbia welcomed displaced, returned and refugee families, sharing what little they had with the people who had come to settle there. Yet, with little outside support, the people of Bouroumbia struggled to make ends meet. In the face of limited economic opportunities and the lasting trauma of displacement, many did not know where to turn to provide for their families.

Amid this struggle, Yah was selected to participate in the Stabilization and Reconciliation, or STaR, project in the Lake Chad region in 2020.

“When I heard about the project through CRS, I embraced it with open arms,” Yah says.

In partnership with Secours Catholique et Développement (SECADEV), a member association of Caritas Chad, CRS works with communities to promote economic recovery by providing training, tools and seeds for farming. Yah and other community members have used these resources to produce agricultural goods for sale and to earn money to care for their families. 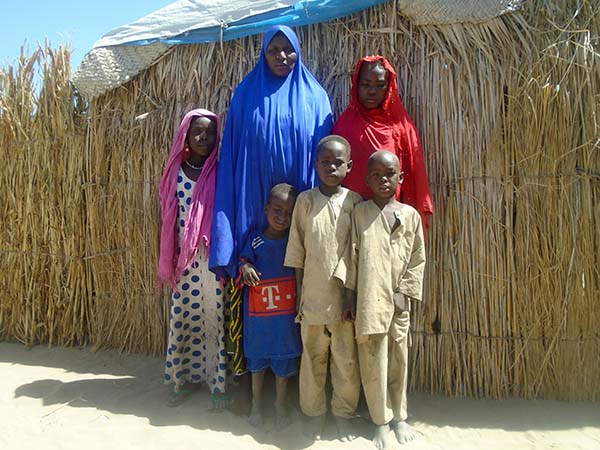 Yah Kinnah Ali and her family now live without fear and with hope for the future. Photo by CRS staff

With better quality seeds and tools, as well as robust training and mentoring from project staff, Yah is now able to grow millet, corn, okra, garlic, onions, tomatoes and wheat to feed her family and sell at market. Yah’s income increased from $273 per year before the project to $455 per year today.

“The income from my sales allows me to take care of my children, enroll them in school, pay for clothing and buy or repair necessary agricultural equipment,” Yah explained.

With the assistance provided by the STaR project, Yah was also able to join and partake in the success of the village’s agroeconomic cooperative.

“I am active in the project, without fear—supporting myself, my family and my community. I overcame those difficult challenges thanks to my faith in God and in using the skills I’ve learned from this project.”

Christopher Bleers, chief of party for the STaR project says, “Yah’s experience in creating an improved livelihood for herself is emblematic of what CRS hopes to achieve—thousands of women across Chad and the wider Lake Chad Basin equipped with new tools and skills to provide for their families as they rebuild their lives in areas where stability has returned.”

Through the STaR project, community members like Yah and her family gained improved production and increased incomes while significantly reducing hunger. After fearing for her life and the lives of her family just a short time ago, Yah now says, “I can ensure the health and education of my children … and now I can find smiles in my home.”

More work remains to improve individual successes and overall conditions in the community. Yah hopes for a future where she has more land to expand her agricultural production and guarantee the health and education of her children. For the community, she hopes for a school, a health center, more community equipment and a transportation system to expand markets.

In looking to the future, Yah has an all-encompassing request for her peers: “I ask my community to get to work for the development of Bouroumbia.”

With the continued resilience and determination modeled by others like Yah, such prosperity is within reach.

The STaR project in Chad also helps revitalize local economies by establishing savings groups in which members save and borrow money to kickstart business ventures that will sustain their families and contribute to the economic and social viability of their community.

Through the project, CRS supports communities whose lives have been threatened by food insecurity, conflict, terrorism, displacement and climate change in the Lake Chad Basin. STaR is a three-year project implemented in Nigeria, Niger, and Chad, and funded by the German Federal Ministry for Economic Cooperation and Development through the KfW Development Bank.

Read the latest update from CRS country programs and partners around the world as they respond to... END_OF_DOCUMENT_TOKEN_TO_BE_REPLACED

Read the latest two-page summary from CRS country programs and partners around the world as they... END_OF_DOCUMENT_TOKEN_TO_BE_REPLACED