Caring for Children Orphaned By Ebola

They survived even as entire communities were wiped out by the deadly disease. More than a year after the Ebola outbreak in West Africa began, communities are still reeling from devastation and loss. In Sierra Leone, CRS is helping children orphaned by Ebola recover from their traumatic experiences. Among those struggling to survive the aftermath is Alhassan Jalloh, a 12-year-old boy from Devil Hole, a community in the western area rural district of Sierra Leone. He is among thousands of children whose families have been torn apart by Ebola. 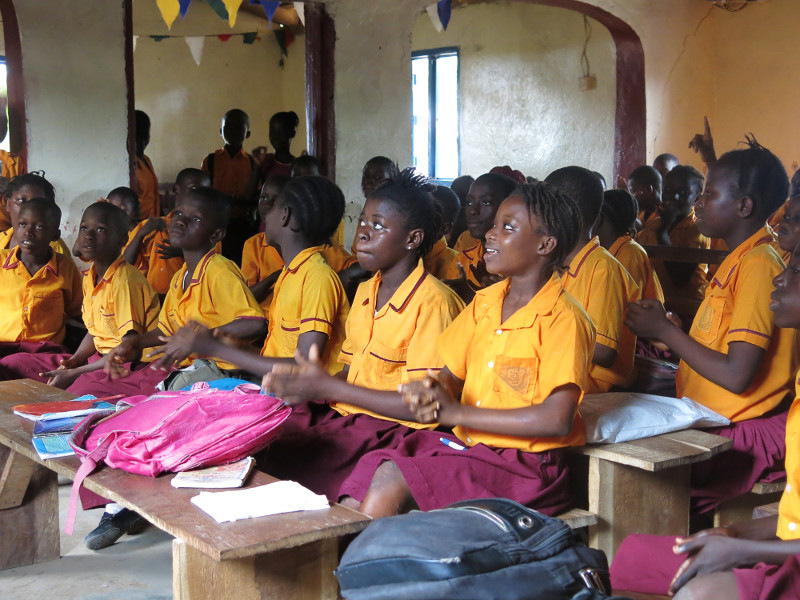 Children participate in an interactive session to help them cope with the trauma and loss of the Ebola epidemic in Sierra Leone. Support for orphans is part of CRS' response. Photo by Annisha Vasutavan/CRS
Life for Alhassan was never easy, but it became even more difficult after Ebola hit his community. He has been paralyzed from the waist down—because of polio—since birth. His right arm is weak and he has moderate learning difficulties.

Both of Alhassan's parents died during the Ebola epidemic that swept their community, because they couldn't get medical care for other illnesses while health resources went toward fighting Ebola. His 70-year-old grandmother now cares for Alhassan and his 5-year-old brother.

"I am really facing a lot of challenges to go to school, move around and to do other things as my [friends] do," he says. Alhassan cannot walk unaided, and his wheelchair is old. "I also have to rely on my grandmother and brother to help me to do basic things for myself."

The Ebola virus first surfaced in Sierra Leone on May 26, 2014. Since then, there have been more than 8,600 confirmed cases and more than 3,500 deaths, making Sierra Leone the hardest hit of the Ebola-affected countries.

CRS, together with our local partners Caritas Freetown and Caritas Makeni, is supporting children affected by Ebola in four districts across Sierra Leone. Caring for the children—one aspect of our overall response to the epidemic—includes psychosocial support and counseling to strengthen their resilience and help them cope with the trauma and loss they've experienced.

"Children participate in a 6-month program, packed with interactive activities, that brings them together with other children from similar backgrounds so they can heal among their peers," explains Annisha Vasutavan, CRS' Ebola response coordinator in Sierra Leone. "Because the program is aimed at children who have been affected by the Ebola crisis, the children are able to relate to others who have experienced similar situations. Not only have some of them lost parents, but many have lost their homes and belongings. Schools were closed for months, leaving students out of touch with their networks of friends."

CRS has developed a series of five short films that address key issues: discrimination, grief, social connections, safety and security, and resilience. Community volunteers are trained to use the films as one tool to help children process the physical and psychological impact Ebola has had on their families and communities. The volunteers lead child-friendly group exercises as part of the screenings.

"Before Alhassan enrolled, he showed signs of distress," says Maria E. Gibson, a counselor with CRS' partner, Caritas Freetown. "He was withdrawn from the community, especially as schools were shut down, leaving him feeling excluded from a normal life. He lost interest in things he previously enjoyed."

Today, as he undergoes counseling, Alhassan seems to be coming into his own again. "The sessions have helped him to engage with his peers and regain his confidence," Gibson says. "He is particularly enjoying one of the films about a boy who struggles to cope with the loss of his parents due to Ebola. This film has helped him to feel less alone by showing him that there are others experiencing a loss like his, and surviving through it."

Alhassan says this has helped him feel more hopeful. "Whenever I have my friends around, I feel so good, and this kind of activity provided for children is welcomed."

Read the latest update from CRS country programs and partners around the world as they respond to... END_OF_DOCUMENT_TOKEN_TO_BE_REPLACED

Read the latest two-page summary from CRS country programs and partners around the world as they... END_OF_DOCUMENT_TOKEN_TO_BE_REPLACED