Building Up Youth and Communities in El Salvador

"I would have been in jail, and who knows for how long?" 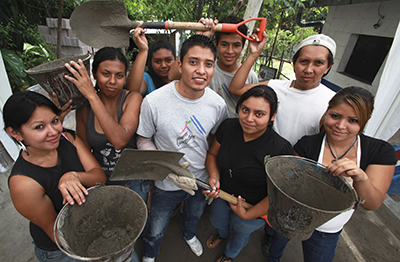 Participants in CRS' Youth Builders project in El Salvador are learning job skills while improving their communities. Photo by Oscar Leiva/Silverlight for CRS

Jorge,* who was speaking to a group of youth ministry leaders visiting El Salvador from the United States, had already spent the previous night in jail. But he had a "get out of jail free card." It came in the form of an ID card from his job—a job he had gotten because of the Catholic Relief Services YouthBuild program.

Unlike Jorge, one in four Salvadoran youth ages 15 to 24 don't work or attend school. It's one of the world's most dangerous countries, with territorial disputes between rival gangs that fuel a culture of crime and violence. Police in El Salvador sometimes conduct raids to deter gang activity, and young adults may be picked up because of how they look, or their family's or peers' associations with gangs, rather than for anything they've done wrong.

That was apparently the case for Jorge. He says the police arrested him at his home as he was preparing dinner. He told them he had been at work all day, but they took him to a local jail, questioned him and held him overnight.

A family member was able to show Jorge's job ID and prove he was employed. He was released at 6 a.m. the next day and arrived on time to his job later that morning.

Jorge says he was led to YouthBuild—which ultimately helped him get the job—by his uncle, who had associated with gang leaders but wanted a better life for his nephew.

"It's profound, and demonstrates the hopes and dreams of the people of El Salvador. It also shows the level of commitment. It would be easy to give up with the establishment, the community and gangs working against you. They are taking control of their own lives so the gangs don't control them," says Ted Miles, CRS relationship manager for youth and education.

Schools in El Salvador are increasingly controlled by gangs, as are the city buses that many children must ride daily to and from school. Many young people drop out.

Meanwhile, insecurity and violence scare off foreign investment and make doing business more expensive and difficult. The World Bank estimates that El Salvador loses 10.8% of its GDP each year to crime and violence.

Lost among the statistics are the youth. Parents in many parts of El Salvador feel powerless to protect their children.

That's where CRS' YouthBuild program—which is part of the YouthBuild International network started in the late 1970s—comes in. The program involves youth and young adults, like Jorge, in solving these problems. It specifically invites those who are out of school or out of work in some of El Salvador's toughest neighborhoods to participate. Based on an approach that originated in Harlem, New York, in the 1960s, YouthBuild provides life, job skills and entrepreneurship training; school re-entry; job placement; and social services for boys and girls. Participants in the 6-month program graduate with a stronger sense of self-worth.

YouthBuild has reached more than 5,000 young people in 4 years. Eighty percent of graduates have either found work, gone back to school, or both. Jorge is one of these success stories. He works at a clothing store to provide for his wife and child.

Miles led the "Called to Witness" trip to El Salvador to foster awareness and education about the Church's work around the world. The experience was designed to enhance Catholic faith formation among youth ministries in the United States.

He says programs like YouthBuild offer young people dignity and hope, often for the first time in their lives.

"YouthBuild changes their frame of mind. They discover possibilities in their lives, themselves, the world around them. They create a plan and a dream," he says. "CRS is watering a seed of hope, keeping them going and giving them the opportunity to dream."

Jorge, and many like him, are rising above the violence they see and building something better. Employers in El Salvador are asking for YouthBuild graduates because they are confident, present themselves well, bring customer relations skills and, like Jorge, show up on time … no matter what.

Based on CRS El Salvador's sucessful programs, YouthBuild will expand in Mexico, Guatemala, Honduras and Nicaragua over the next three years to reach a total of 8,370 direct beneficiaries.

August recess is a key moment to meet with your members of Congress while they are out of session... END_OF_DOCUMENT_TOKEN_TO_BE_REPLACED

Watch videos on the issues of hunger and climate change here. END_OF_DOCUMENT_TOKEN_TO_BE_REPLACED