Building Trust and Bringing Water to Communities in Madagascar

"If there is no trust, we have very little chance of getting anything done, let alone having impact."

The challenge before him is daunting. Most people in Madagascar live on less than $2 a day and face a high rate of chronic malnutrition. Growing enough food has been complicated by climate change, which has brought increased cyclone activity, unpredictable rains and persistent drought. That’s the big picture. 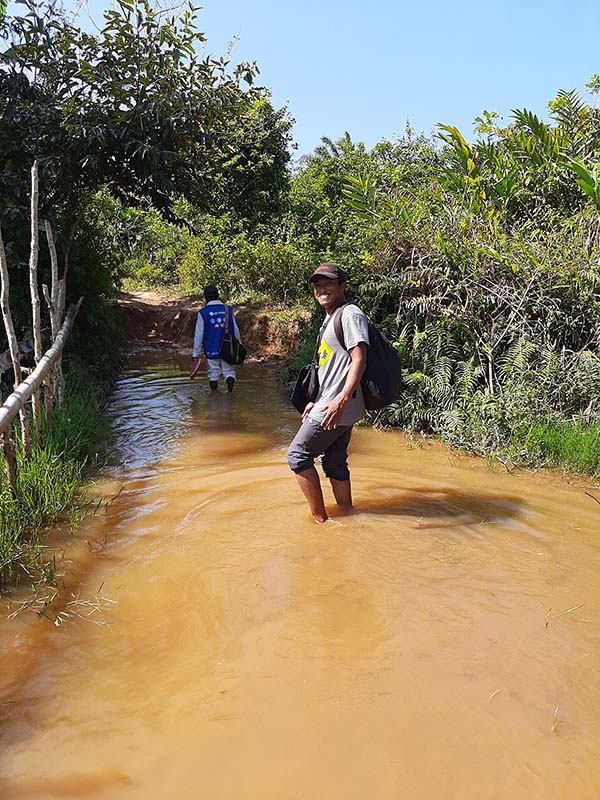 CRS staff hydrologist Firaisantsoa Rakotoarimanana stands in a waterway as part of his work to bring clean water systems to communities in Madagascar. Photo by CRS staff

The smaller, more personal picture includes rough terrain, remote workplaces that lack modern infrastructure—or even the most basic technology. When Ntsoa comes to a community, he often finds that what little water is available is unsafe and unmanaged.

Ntsoa’s official role involves searching for water for household use and agriculture. He seeks viable springs or ground water, then he designs systems based on the availability and quality of the water. If, for instance, the water has high concentrations of iron, he designs a system to remove the iron. He also looks at ways for the community to make the systems sustainable.

There’s a social side to his work too. Before his search begins, or any systems are designed, Ntsoa does a lot of listening.

This part of the process can take months. He meets with local partners, such as the Ministry of Water, regional authorities, mayors and village leaders. Those meetings begin the conversation.

“You have to eat with the community, you have to talk with them,” he says, explaining that he takes time to get to know the people he serves and gain their trust. He learns about how they live, the time it takes for them to fetch water, the rains for the year, the seasons—all the while, developing a relationship.

One of Ntsoa’s most memorable assignments is a perfect example of that. The community was gracious and offered food and drinks. They even helped him find water sources and gave him a house to stay in. It made quite an impression. Because of their kindness, even though they spoke a different dialect, he was still able to build a relationship with the community.

“Communities need to know that the work we do is for them. If there is no trust, we have very little chance of getting anything done, let alone having impact. If the community trusts us, it is easier to learn what their needs are, what their problems are. That leads to better project implementation,” he says.

Ntsoa explains that water systems use community land, so without trust from the beginning communities might refuse to allow use of their land. “And then they won’t use the water systems being put in place,” he says. An important part of his work is to help people overcome misconceptions about technology and what’s involved in a project.

“It is like a stranger giving you food. You probably won’t eat it because you don’t know them or trust them. And it is the same with our work,” he says.

Ntsoa is proud of what he does, but it’s not easy. Usually he drives a motorcycle to meet with communities, but often the roads are so rough he has to walk—sometimes as far as five hours on foot.

When asked about how to improve the situation in Madagascar, he says we need to focus on the remote areas where the majority of people live.

He recalled a village in Eastern Madagascar. The residents used the river for all household needs, from bathroom to kitchen. It posed major health risks. He helped change that. Now the community has a beautiful water source with connections to houses, providing clean, affordable and safe drinking water

“In 30 years, I hope Malagasy people can meet their financial needs—that they can drink clean water, eat well and receive the medical care they need.”