Like farmers everywhere, farmers in eastern Ethiopia’s Oromia Region look to the sky for the two elements they need most: sun and water. Ethiopia gets a lot of sun, but has not had much rain this year. In fact, some areas have not seen rain for two years. 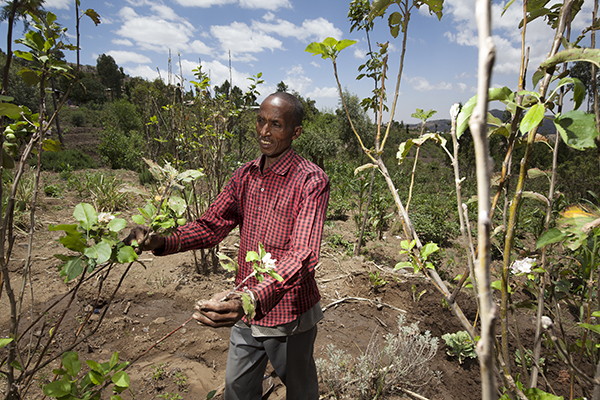 Isike Abdukerim, a poor farmer in the eastern part of Ethiopia, has learned new farming and irrigation practices that help him grow crops even when there's drought. Photo by Petterik Wiggers for CRS

And, since 85% of Ethiopians depend on rain-fed agriculture, rain is everything—the key to life. A poor harvest locks farmers into a vicious cycle. Without crops—one of two main sources of income—there is no food on the table.

“The biggest problem is the lack of rain,” says Isike Abdukerim, who farms a small plot of land and used to have a small herd of livestock.

Animals are the other most valuable asset for families here. If sold in good condition, they can yield enough money to feed a family for some time.

“Because of this drought, we don’t have any feed for our cattle so I had to sell the animals,” says Isike.

Vast grazing areas look deceptively fertile with a soft green veil stretched over the land. But the grass yields no nutrition, too short for emaciated animals to grip. Instead, their hooves kick up red dust plumes with every step they take.

Ethiopia is in the midst of the worst drought in half a century. Two failed rainy seasons in 2015, and poor rains in early 2016, have led to severely reduced harvests. The cause: a combination of climate change and an El Nino current in the Pacific Ocean. The result: food is running dangerously short.

“This drought makes it difficult [to respond] because the entire country is experiencing it,” says Haileyesus Lemlan, who coordinates Catholic Relief Services programs in Oromia. “People are able to cope differently from area to area, but everyone’s affected to a certain degree. You can find the truth of drought inside people’s homes.”

Inside Isike’s home, you’ll find a large white sack of grain and a tin of cooking oil. Both came as emergency assistance from the U.S. government, which is currently providing for 2.8 million Ethiopians through the Joint Emergency Operation Program. 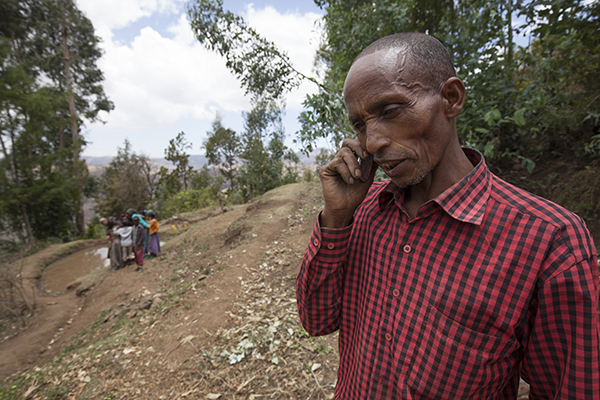 Through CRS projects, Isike and his family learned how to cultivate vegetables year-round. He also works as a weather forecaster to alert his community to changes so they can adapt their farming practices. Photo by Petterik Wiggers for CRS

His thin body is visible beneath a worn leather jacket. His hollow cheeks are a sign that the drought has spared no one. A major emergency response is underway—by CRS and its partners, and in collaboration with the Ethiopian government—to help people survive.

Along with lifesaving food aid, CRS is taking the long view, addressing the hardships Ethiopians face this year and into a future when the impact of climate change will be felt time and again.

To help farmers like Isike build their resilience so they can withstand more frequent, prolonged droughts, hotter temperatures and environmental degradation, CRS has begun training communities to take matters into their own hands.

Through REAP, a three-year project funded by the U.S. government through the U.S. Agency for International Development, CRS helps people adapt new practices and technologies to mitigate the devastating effects of climate change. The project addresses natural resource management, health and nutrition, farming practices and early warning weather forecasts. It also provides opportunities for people to earn an income.

Isike was trained to be his district’s early warning coordinator, its central forecaster. He regularly receives and collects local weather data, then shares it via his cell phone to a select group of people, who in turn share it widely with their networks in emergency meetings and through word of mouth. The system allows farmers in extremely remote areas without electricity or telecommunications to make decisions based on real-time weather information.

“Current predictions, in part also based on our indigenous knowledge about things like wind direction, suggest there won’t be any rain in the coming months,” Isike says.

So Isike, along with others in his community, got the tools, seeds and training needed to make a keyhole garden, an elevated plot where he can grow vegetables. Using locally available materials—different layers of soil, rock and sand, and only small amounts of water—this type of raised-bed garden can provide year-round crops.

“With only a little water, I can harvest vegetables all year,” he says, standing next to one of his two gardens, which looks lush against the gray, rocky backdrop.

“The main advantage of the gardens is the ability to grow vegetables even during drought,” he says, which helps him as a father of nine children. “Having vegetables has a good benefit for my family. Vegetables prevent diseases and malnutrition, and provide a more balanced diet.”

CRS’ focus on nutrition and improved health—especially for pregnant women, mothers and children under age 5—is part of an integrated approach. In addition to providing the seeds, tools and training to cultivate different crops, community leaders learn the importance of nutrition and how to prepare nutritious meals.

“Before the keyhole gardens, making vegetables a part of our diet was not known in this area,” Isike says. Today, there are 102 keyhole gardens in his community of 10 small villages.

While rain will remain critical for these farmers—whose lives hinge on the bounty of the next harvest—food aid combined with the more nutritious vegetables will at least carry them through the lean season of April to August and take an important step toward adapting to climate change.

Pray and reflect with your community on our call to respond to the needs of our sisters and... END_OF_DOCUMENT_TOKEN_TO_BE_REPLACED

Reflect on the impact climate change has had on our planet and pray for the Holy Spirit to change... END_OF_DOCUMENT_TOKEN_TO_BE_REPLACED

August recess is a key moment to meet with your members of Congress while they are out of session... END_OF_DOCUMENT_TOKEN_TO_BE_REPLACED