Any hope of correcting the long-term effects of climate change on the lives of the world’s most vulnerable requires effective, sustainable use of diminishing farmlands. That the recent Bonn climate conference (COP23) formally agreed to a way forward on implementation of agricultural practices related to climate and food security is deeply encouraging to CRS. 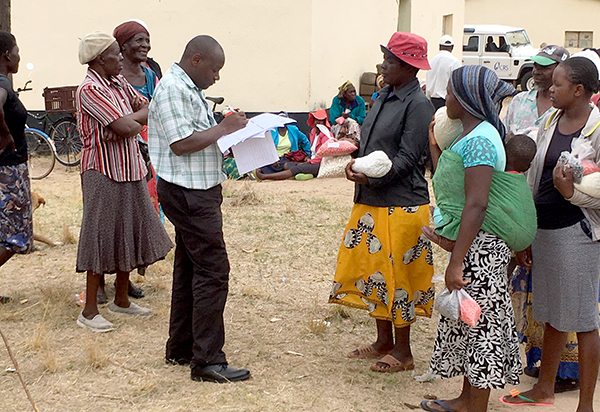 Smallholder farmers in Zimbabwe waiting to receive cereal and legume seed that will allow them to test the effectiveness of green manure/cover crop systems in their fields. Photo by Christian Thierfelder, CIMMYT for CRS

The agency’s experience in the agricultural sector prompted it to pursue climate-smart practices long before many entities were able to formally recognize the threat of climate change. To bring those and other practices to scale requires broad international cooperation, especially as The Food and Agriculture Organization reported this year an increase in the world’s chronically undernourished population, from 777 million in 2015 to 815 million in 2016.

In paving the way for implementation of climate and food security policies, the COP23 agreement also opens doors to discussions over funding.  The timing is critical given the 2030 deadline of the Sustainable Development Goal to end world hunger and growing concerns that weather patterns are further threatening fragile food supplies.

Parties now must formulate and return recommendations on a variety of issues from soil health to socio-economic impact of climate change on agriculture. Much remains to be done. Still, the parties see the agreement as a significant step for agriculture.

Pope Francis’ 2015 encyclical Laudato Si underscores our responsibility to care for the earth as our common home. COP23 further encourages CRS that nations are moving toward embracing that responsibility and acting on behalf of the world’s most vulnerable.

Give Where It's Needed Most

Pray and reflect with your community on our call to respond to the needs of our sisters and... END_OF_DOCUMENT_TOKEN_TO_BE_REPLACED

Reflect on the impact climate change has had on our planet and pray for the Holy Spirit to change... END_OF_DOCUMENT_TOKEN_TO_BE_REPLACED

August recess is a key moment to meet with your members of Congress while they are out of session... END_OF_DOCUMENT_TOKEN_TO_BE_REPLACED