Imagine buying a year’s worth of health insurance for only $7. Now imagine that $7 a year is an impossible expense.

Immaculee Gnangui and her daughter, Laurencia, use micro health insurance at a medical office in Benin. Photo by Michael Stulman/CRS

That is the reality of poverty in Benin. For parents with a sick child, it’s beyond grim.

Out-of-pocket health expenses consume more than 40% of the annual budget of the average Beninese household. Even when a child’s life is at stake, the health care system cannot absorb costs that parents can’t pay.

Sister Ghislaine Zinsou, a midwife at a health center in Chabicouma, a village in northern Benin, says many parents are left with only one option.

“People stayed at home. They didn’t come quickly and the children would die at home,” she says.

Many of us would say, “Let us cover that cost.” But there’s a better, more sustainable response. 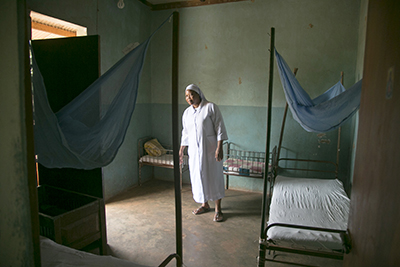 Sister Ghislaine Zinsou is a midwife at a health center in Chabicouma, a village in northern Benin. Photo by Michael Stulman/CRS
Catholic Relief Services and Caritas in Benin partnered with a private insurance company to design and promote a micro health insurance plan. It covers 70% of costs at participating local health centers for less than $7 per person, per year.

And CRS found a sustainable way to help them pay the plan premiums, through Savings and Internal Lending Communities.

SILCs form community-based savings groups of about 20 people. They pool their savings and, over time, are able to lend money to members. The loans are intended for pressing needs or business growth. The interest paid on the loans increases the group’s holdings.

In addition to the loan fund, members also regularly contribute to a social fund, which can be used for unexpected health costs. That’s one critical place where joining a SILC pays off for parents in Benin.

While the social fund helps, it didn’t solve the problem. Many people still found themselves borrowing from friends or neighbors to pay the difference between what the fund provided and their actual health costs. 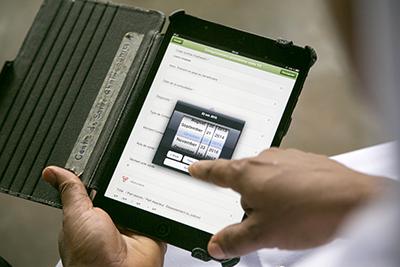 The social fund can’t be used for insurance—only for actual costs. But SILC helped in another way.

Immaculee’s loan from the SILC group helped her improve her business, and increase her income, allowing her to pay the $7 insurance cost.

“With the money from my business, I can pay for the health insurance. I can come [to the health clinic], get treatment and feel better,” she explains.

“People in the village are running to subscribe,” says Immaculee. “I would never think about leaving the insurance because it’s helped me so much.”

Her advice to the community: “Sign up. You will save a lot of money in the year.”

Find out more about programming in Benin.

In just a few years, SILCs around the world grew to more than 1.5 million members.

We seek daily renewal from the source of all life, and so we pray ... END_OF_DOCUMENT_TOKEN_TO_BE_REPLACED

Our walk with God is reflected in our walk with others, and so we pray ... END_OF_DOCUMENT_TOKEN_TO_BE_REPLACED