'All Ate and Were Satisfied'

Photo by Sara A. Fajardo/CRS

Taking the five loaves and the two fish, and looking up to heaven, he said the blessing, broke the loaves, and gave them to the disciples, who in turn gave them to the crowds. They all ate and were satisfied….
—Matthew 14: 19-20

Among the most familiar passages in the New Testament, the Feeding of the Multitudes appears in all four Gospel accounts, and the details are very much the same. The multitudes did not get a pittance. They ate until they were satisfied. Mark merely says it was a "vast crowd." John counts "about five thousand in number," and Luke says that "the men there numbered about five thousand." Matthew reminds us that it wasn't just the men, but women and children too. 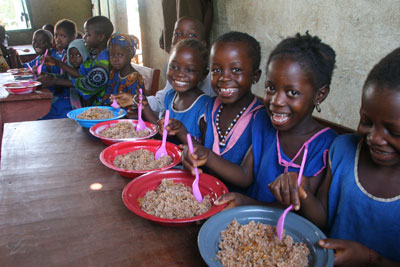 The number that matters is "all." All were satisfied.

Two thousand years removed from the event, the words can still make us stop. In our world of hunger, how, indeed, can all be satisfied? We know the realities, and we know how hard miracles are to come by. "This is a deserted place and it is already late," the apostles reminded Jesus (Matthew 14:15). And we think of the remote places of our world, not isolated by a dozen miles or so from food supplies, but by hundreds, or thousands, or isolated by injustice and drought, and cruelty. Where do we turn?

In John we find our answer. His Gospel gives an account of the small boy—we know almost nothing about him—who provided the few morsels, which must have been everything to this child, that became this bountiful feast. But his heart and his faith guided him to trust the Lord. And he gave a response as enormous as the challenge before him. He gave what he had.

And all were satisfied.

That child's faith and compassion perhaps was the first miracle that day. It's a miracle we at Catholic Relief Services have had the joy of seeing repeated for over 75 years. In recent years and months, your compassion has allowed us to satisfy multitudes following the Haiti earthquake, floods in Pakistan and India, during long drought in East Africa and with agricultural projects around the world. Through CRS, you offer not only food relief but help restore livelihoods, increase harvests and build long-lasting solutions to hunger every day that all might be satisfied.

CRS is turning your compassion into world-class expertise in international aid and development in nearly 100 countries. We respond to major emergencies, fight disease and poverty, and nurture peaceful and just societies. CRS assists people as part of the universal mission of the Catholic Church on the basis of need, not creed, race or nationality.

And we want to share with you the joyful good news that you, like that boy with the few loaves, have been a part of it—the first part of it. In living out your faith in trust and compassion, these miracles are happening worldwide. Do you want to be a deeper part of these miracles? Here's how.

We seek daily renewal from the source of all life, and so we pray ... END_OF_DOCUMENT_TOKEN_TO_BE_REPLACED

Our walk with God is reflected in our walk with others, and so we pray ... END_OF_DOCUMENT_TOKEN_TO_BE_REPLACED