In a busy market in southern Madagascar, Voajoroe* receives money from a woman and quickly counts it. She then hands over a chunk of peanut brittle and some fried pastry. It is a transaction that you could miss if you looked away for a few seconds, but this was the part of the day that used to worry Voajoroe the most. Those few seconds of every sale she made was when she could receive the wrong amount of money for the goods she sells. Just a few months ago, Voajoroe could not read, write or calculate simple sums. Without these basic skills, she could be taken advantage of in the market and would often return home with very little money after a whole day of selling. 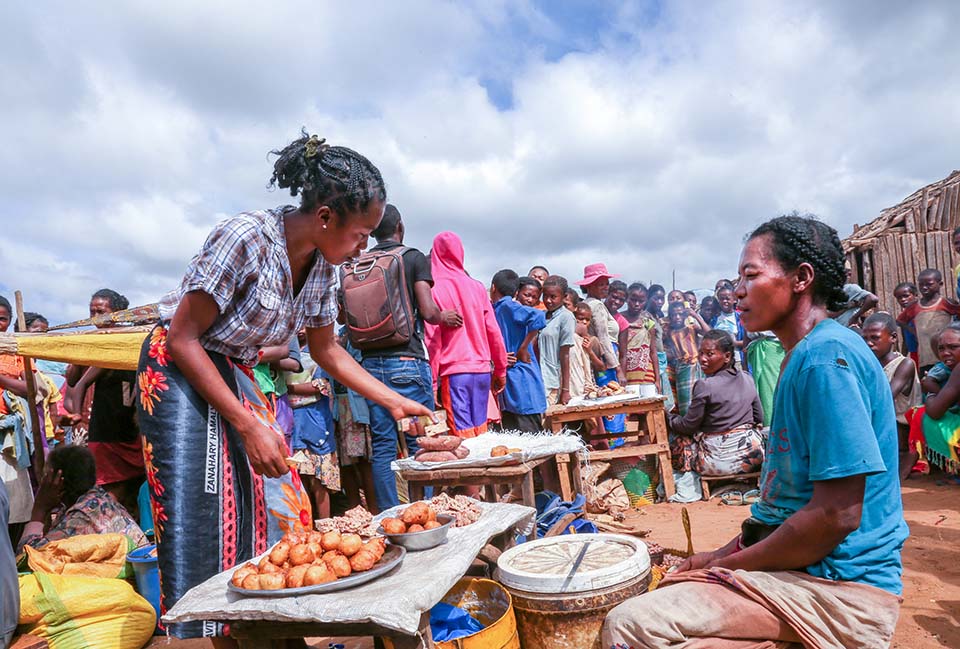 Voajoroe, right, sells peanut brittle, buns and other snacks in the market in Tsihombe district, Madagascar. She learned to read, write and count at a CRS adult learning class. These skills help her sell her products in the local market.

Across southern Madagascar there are thousands of markets like this one and a large number of people who sell in these markets are women. They sell everything from rice, oil, meat, and fruit to cloth, rubber flip flops, and even livestock like chicken, goats and cows.

One in three adults in Madagascar cannot read, write or calculate simple sums. In this part of Madagascar, the number of people over age 15 who are illiterate is even higher. Women are more likely to be illiterate. When people are unable to read or write, it puts them at a disadvantage. They are often unaware of important health information, find it difficult to calculate money for business transactions and do not have the confidence to participate in many community activities—including voting.

Tahirisoa is also an adult learner and she sells rice in the same market. She hopes that as she becomes more proficient in reading and writing, she will be able to expand her horizons and get a job. 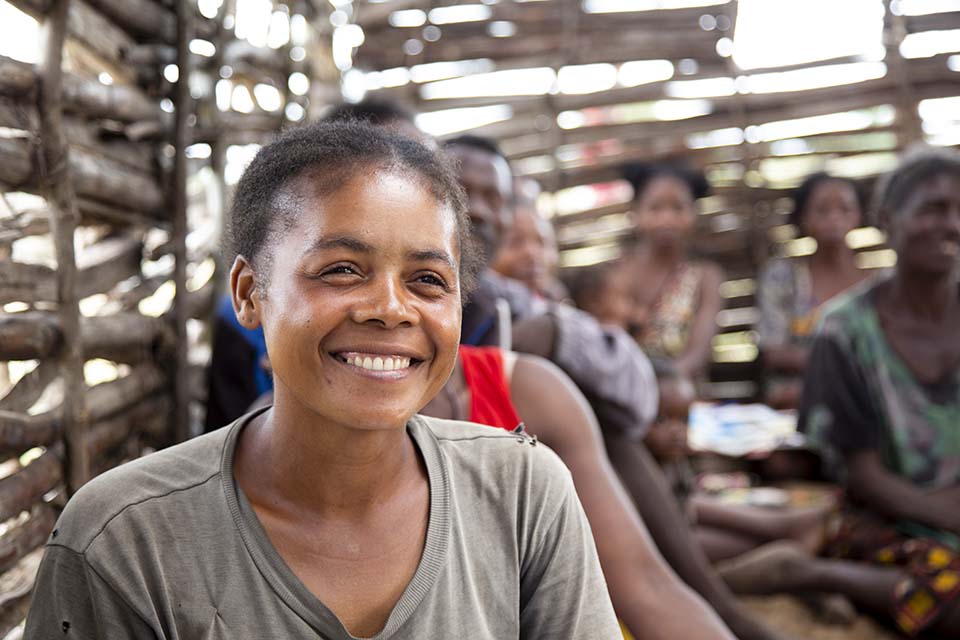 Tahirisoa, an adult learner, participates in a literacy class in Tsihombe district, Madagascar.

“I didn’t know about sums before because I didn’t know how to count. So sometimes I didn’t even know if someone took money from my pocket,” she says. “But now I know exactly the sum of all the things I’ve sold. I even subtract some of the things I need to buy from my capital, and now no one can trick me. I’m pretty sure of that.”

A critical part of literacy is that it improves income for the whole family. Families eat better food and children go to school because parents can pay fees and buy school supplies. And households can invest in their future.

“Before, I didn’t know how to count the money so I would recognize the money by its color. And sometimes I go to the market trying to sell things and come home with just two bills. But now, when I realized I could have a large sum of money, I start the morning with a very thin stack of money, and I come home with a thick stack of money because now I can count. This is important,” says Tahirisoa.

Navigating a world of words 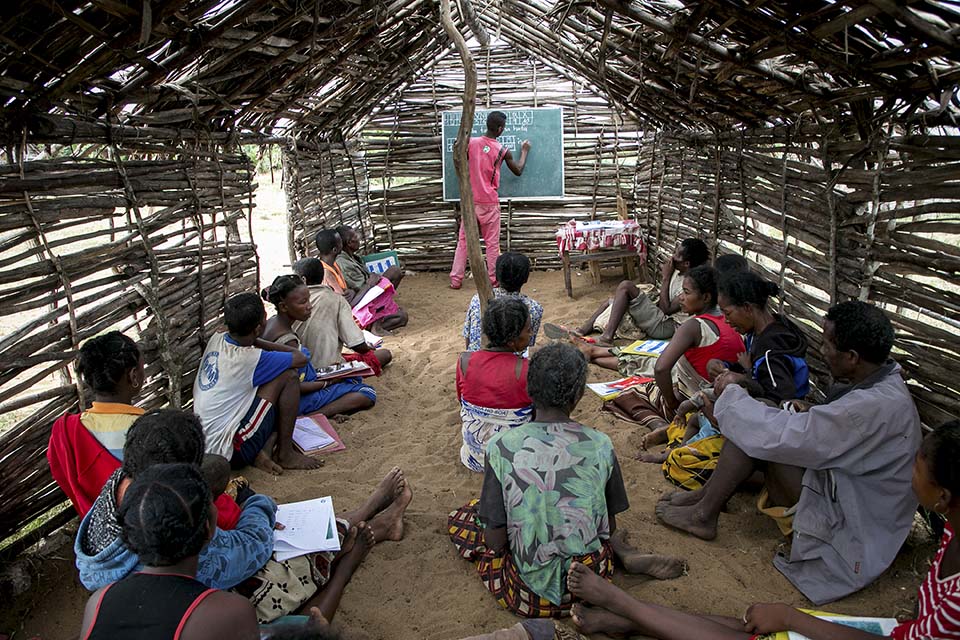 A teacher leads the lesson during a CRS adult literacy class, where students gain skills in reading, writing and counting in Tsihombe district, southern Madagascar.

Liasinaboe sells watermelons. Before she started the adult classes, she felt overwhelmed any public notices or written information she saw in her small village. She was one of the first to join our adult classes when we started the program in her village. For Liasinaboe, it felt like being introduced to a whole new world filled with possibilities and helpful information.

“My world has changed,” she says. “When I learned how to read, I realized all the signs that I see around me are teaching me something. For example, they would tell me I had to get my child vaccinated. No one had told me that before, and I’ve seen this sign for years in my village.”

Liasinaboe sees the value in how being able to read impacts not only her business, but her health and well-being.

“Like a miracle, someone came into my village and told me ‘I can teach you what all those things mean.’ So I didn’t hesitate one second,” she says.

The confidence to be seen

Many people who cannot read or write feel excluded from their communities. They are often not informed enough to participate in politics and community decision making, and can be easily manipulated.

“I was always convinced that going to school would be something great, but I come from a family that couldn’t afford to send me to school. So this is my opportunity, and I realize that it’s not just learning about how to read and write—they teach me how to be clean, which is something I didn’t realize before,” says Tahirisoa.

“What really changed my life is the idea of being clean and all the things related to hygiene that they taught me at school. Now people see me differently because I am cleaner,” she says. “So, everyone around me in my community, people who didn’t notice me before, notice me now. This is something I cherish because now I have the feeling that I belong to this community.”

For Voajoroe, learning to read and write has shown her the importance of education. Now she is ensuring that her four children receive an earlier start in education than she did. 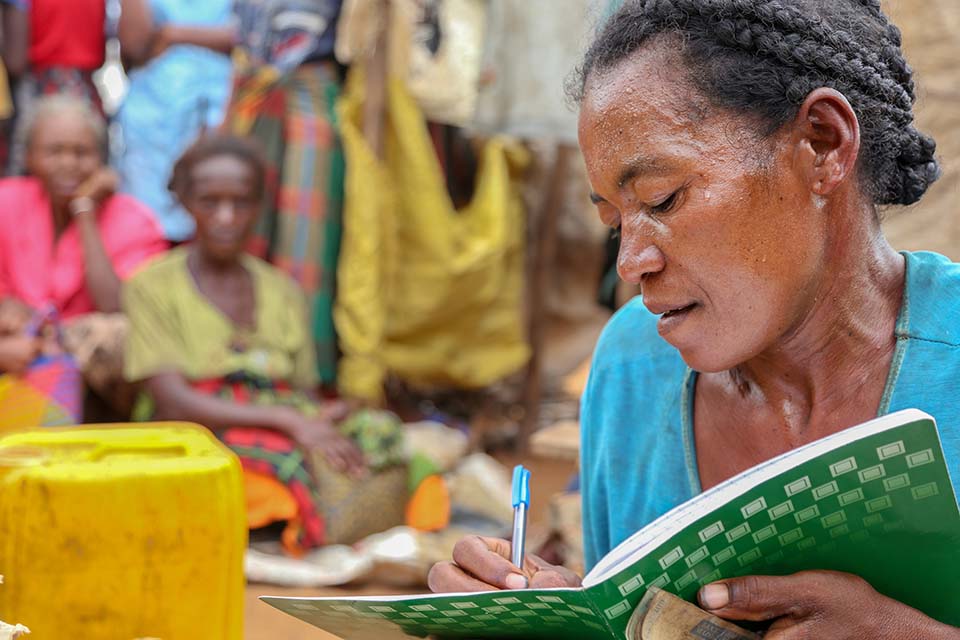 As a result of the literacy class she attends, Voajoroe makes more money in the market because she now gets the proper amount of pay for her products.

“It was as if someone opened a door inside my head, and then I realized I needed to send my children to school. When the teachers saw me learning in this class, they told me they can take care of my children. And now they are all in school.”

She speaks about her children with a quiet confidence, which she says she gained since learning how to read and write. She speaks up more and participates in community events.

“I really like social gatherings. Before, I was ashamed. I felt excluded because I didn’t know how to read and write. Now I’ve made new friends in the class, and I really hope I can make as many friends as I can because that will make me really, really happy.”

In southern Madagascar, Catholic Relief Services is working in partnership with the Sisters of Charity to teach people like Voajoroe, Tahirisoa and Liasinaboe how to read, write and calculate simple sums. These literacy classes began as a pilot funded by the U.S. Agency for International Development through its Development for Food Assistance Program. Today, with funds from private donors, CRS has expanded and continued the adult classes. Learners meet once a week and range in age from ages 15 to 59. In four years, 3,198 people have learned how to read, write and calculate simple sums.

*In this part of Madagascar many people have only one name.

Help provide an education for everybody

A prayer that God may fill our hearts and our communites with song as we set to doing His work in... END_OF_DOCUMENT_TOKEN_TO_BE_REPLACED