4 Reasons to Pay Attention to the Paris Climate Talks

COP21? 2°C? INDCs? It’s easy to get lost in United Nations’ jargon, but the importance of the 21st Conference of the Parties, or COP21, in December makes it worth wading through a bit of alphabet soup. The Paris meeting is the 21st conference of the nations who signed on to the United Nation’s first climate change convention. COP21 is an attempt to reach a global agreement to stop the rise of temperatures that many scientists say put people, and the planet, at risk. Damaging consequences could include sea level rise and flooding, increasingly violent storms, chronic drought and global hunger. 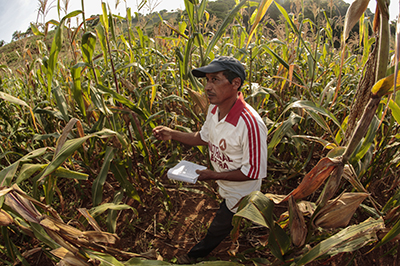 Climate change means rains are scarce for farmlands in La Loma Community, El Salvador. CRS is helping farmers like Lorenzo Antonio Leon plant corn using new agricultural practices that keep moisture in the ground. Photo by Oscar Leiva/Silverlight for CRS
It may not seem like much, but scientists warn that 2°C  is the tipping point. The Paris talks are aimed at keeping the global temperature rise below this point and at putting the world on a more sustainable path. To do so, countries have been asked to submit proposals to cut their greenhouse gas emissions—their Intended Nationally Determined Contributions, or INDCs.  Cutting emissions, many scientists say, will reduce the enhanced greenhouse effect causing the planet’s rising temperatures.

We Care As Catholics

Pope Francis’ encyclical, Laudato Si’, moves out of the realm of percentages, degrees and international frameworks to help us understand the human face of climate change. He reminds us that the poor and vulnerable are especially dependent on the earth for their livelihoods, and therefore most at risk. Poverty and environmental degradation are intimately intertwined—“one complex crisis which is both social and environmental.”[1]  At Catholic Relief Services, we see this every day in our work overseas. The people we serve lead simple lives that have contributed little to climate change, but they are on the front lines when it comes to combatting and coping with its effects. Laudato Si’ calls on us to fulfill our moral obligation to care for one another, especially the poorest among us, and reminds us that caring for God’s creation is part of doing just that.

Why It’s Different This Time

The fact that Paris is the 21st meeting on climate change means that we’ve been talking about it for a long time. Twenty-one meetings seems like a lot, but climate change is complex—bringing 190 nations to agreement isn’t easy.  But lessons learned from past negotiations make these talks hopeful. In the past, not all nations were asked to develop targets. In fact, all developing countries were exempt, including China and India, the world’s #1 and #4 emitters. This time, all countries have been asked to contribute. At last count, 155 countries accounting for 87% of the world’s emissions have submitted reduction plans! That’s a major milestone. Moreover, regardless of what happens in Paris, China and the United States—the world’s #1 and #2 emitters—have outlined their joint agreement to reduce emissions.  And many cities and businesses are taking measures that will support the goals laid out in various national plans.

You Can Make a Difference

In 2010, at the 16th meeting of the Conference of Parties, climate change negotiators established the Green Climate Fund. The Green Climate Fund will provide technical and financial support to help developing countries achieve their proposed reductions in emissions. The fund will also help vulnerable, at-risk populations cope with the effects of climate change by, for example, helping farmers in poor nations plant drought-resistant crops and coastal communities withstand more frequent floods. Wealthy nations have promised funding in the amount of $10 billion by the end of 2015, but much of that funding has yet to be delivered. The United States has pledged $3 billion over 4 years, but Congress has delayed the first installment of $500 million.

This funding is critical to showing developing countries that we support their efforts and that the United States, as the world’s premier economic power and #2 emitter of greenhouse gases, is committed to upholding our end of the bargain. As the Paris talks get underway on November 30, Congress will be considering financial support to the Green Climate Fund. You can take action and let them know you care by clicking here.

On September 23, 2015, Pope Francis addressed the White House and the American people. He told us that climate change is no longer a problem that can be “left to a future generation.”  The time for action is now—for our planet and for ourselves.

Use this calendar for key dates to reflect and take action with your community to address climate... END_OF_DOCUMENT_TOKEN_TO_BE_REPLACED