Epiphany: A God for All

There fared a mother driven forth
Out of an inn to roam;
In the place where she was homeless
All men are at home. 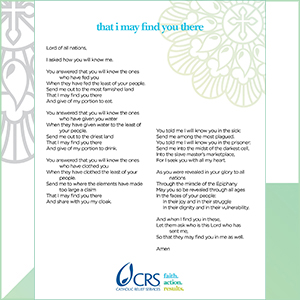 There is a moment in the film The Nativity Story that is achingly brief, but deeply profound. When the shepherds leave their fields and come to approach the Holy Family in the stable, they gaze on Christ reluctantly. Despite one of the shepherds having aided Mary earlier in the film, they know their place. Shepherds were above lepers in the social hierarchy of the times—but few others. They were tolerated because the flocks they guarded were meant for sacrifices in the temple, but they were kept apart from society. They were men who did a very dirty job, among people who honored God through observation of the Law. And no small part of the law was about cleanliness. Those who were unclean could not approach the sacred.

So there they were, stilled, in wonder at the miracle before them, but standing apart. Until Mary softly says, “He is for all men.”

This transcendent moment is where Epiphany begins. The God of Abraham, Isaac and Jacob—the God of a certain people and approachable only by a certain class of people—is now revealed as the God of all, for all. As Paul tells the Galatians, “There is neither Jew nor Greek, there is neither slave nor free man, there is neither male nor female; for you are all one in Christ Jesus.” Or to the Colossians: “Greek and Jew, circumcised and uncircumcised, barbarian, Scythian, slave and freeman, but Christ is all, and in all.” His blessings, his mercy, belong to all. None is beyond his reach, none beyond his reconciliation.

Which brings us to the magi, with whom the great feast of Epiphany is most associated. We know little about them from the Biblical account, but our tradition names them and numbers them as three (likely to correspond to their three gifts). In many of our crèches, they are depicted as having distinct faces and garb—characterizing one as Asian, one as European, and one as African. This is no latter-day graft for maximum market exposure, but a tradition reaching back centuries. (An even older tradition from when the world was smaller depicts them as Persian, Indian, and Babylonian.) The world and its peoples were understood to stretch in three directions—East, West, and South—and the Epiphany embodied in the Christ child was and is to be seen as a light revealed in all directions. All nations, all people, all sinners shall know him. Dirty shepherds and alien strangers too. To paraphrase G.K. Chesterton, where Christ lay homeless, all have found a home.

This is why a feast like Epiphany is so deep a part of who we are as a Church. And so deep a part of what Catholic Relief Services and the family of Caritas agencies mean to us as a church. There are dark places in the world, places of hunger, of exploitation, of dryness, of war and natural disasters, where human dignity is under assault on a daily basis. But through the good works of the Church’s people, and through their prayers, God’s grace may still be known, and his light may still shine.

And should anybody ask why—why we do these things for people we may never meet, who likely can never repay us—recall that it is because of that vulnerable child laying in that virgin’s arms.

He is for all people.

We seek daily renewal from the source of all life, and so we pray ... END_OF_DOCUMENT_TOKEN_TO_BE_REPLACED

Our walk with God is reflected in our walk with others, and so we pray ... END_OF_DOCUMENT_TOKEN_TO_BE_REPLACED