Home / Where We Work / Europe

Your help is needed in Ukraine where there is great risk of suffering both within Ukraine and for those who may flee to neighboring countries for safety.  CRS and our partners are responding and we need immediate support to meet both ongoing needs, as well as those related to families forced to flee their homes as the situation intensifies. CRS and Caritas partners are ready to provide safe shelter, hot meals, hygiene supplies, fuel to keep warm, transport to safe areas, counseling support and more. 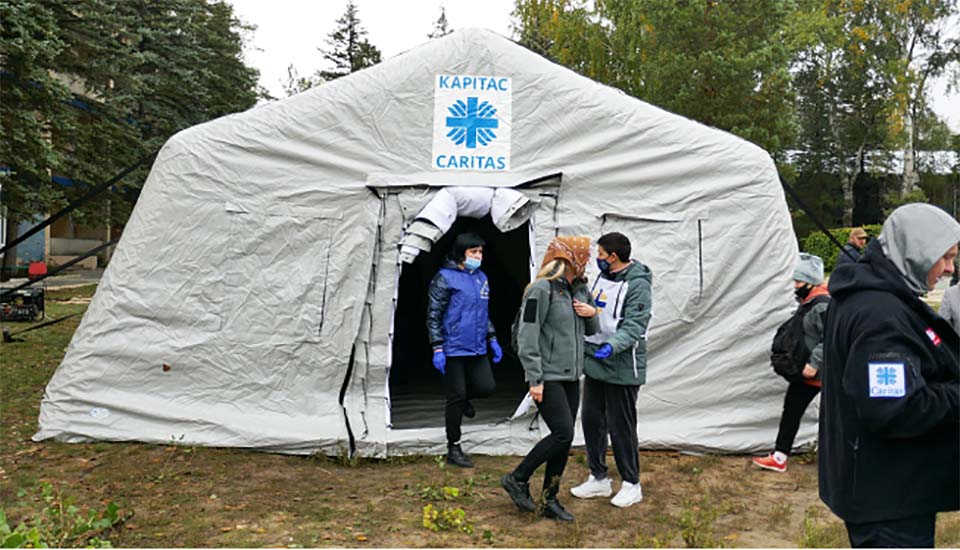 Following the Russian invasion of the country from in the early hours of Thursday, February 24, the capital city of Kyiv and the eastern city of Kharkiv were targeted with attacks that quickly spread across central and eastern areas of the country. In less than 24 hours, attacks displaced people from their homes, especially in those cities and towns in the east. As events quickly evolve, Caritas teams are preparing to respond to urgent humanitarian needs, including evacuation, food and safe shelter.

CRS and other agencies are also planning to receive Ukrainian refugees in neighboring countries.

Years of conflict along the eastern border have already displaced 1.3 million people from their homes and claimed 14,000 lives. Throughout this time, Caritas Ukraine, with support from CRS, has been providing emergency relief and recovery.

Initial urgent efforts and plans to support displaced families include the following:

Neighboring countries: CRS is helping Caritas Moldova and Caritas Romania prepare for potential waves of displaced people, mapping out a likely initial response and conducting assessment and planning sessions with its network near Ukraine’s borders.

CRS has supported Caritas Ukraine in its emergency efforts since the conflict began in 2014, by providing shelter, food and livelihood support for individuals and families displaced and affected by crisis. Emergency assistance supports people who have been displaced to safe areas, as well as conflict‑affected residents in isolated settlements.

In its emergency response efforts, CRS takes a holistic approach to comprehensively meet people’s immediate and long‑ term needs. These include food, water and safe, dignified

shelter, as well as counseling and care for psychosocial needs, opportunities to strengthen livelihoods and the resources to rebuild homes.

More than 20 years after the fall of the Soviet Union, Ukraine erupted into conflict in 2014. More than 2 million people in Eastern Ukraine have fled their homes as a result of the armed conflict between Ukrainian government forces and separatist groups in the Crimean and Donbas regions of eastern Ukraine.

Caritas SPES – Has been working in Ukraine since 1996 and represents the Roman Catholic Community in Ukraine. Caritas SPES operates more than 30 centers around the country meeting the needs of children, family, the elderly, and impoverished.

Learn More About the Conflict in Ukraine

Read about our history in Ukraine ›

View All Stories And News From Ukraine ›

CRS has provided assistance in Ukraine since the outbreak of conflict in 2014. The initial response focused on the acute humanitarian needs of displaced persons while the response in recent months has evolved towards achieving self-sufficiency for those affected by the protracted conflict and displacement. Geographically, CRS and partners have provided humanitarian assistance along the contact line between Ukrainian and separatist forces and also in major urban centers, located in government-controlled areas, which have seen an influx of displaced persons. In the coming year, CRS and partners will continue to provide life-saving humanitarian aid while also looking at recovery options for those affected by the protracted conflict.