Often described as the "Pearl of Africa," Uganda is defined by its rich culture, diverse flora and fauna, and engaging people. Despite these natural advantages, Uganda continues to face serious development challenges resulting from a protracted civil war, a devastating AIDS pandemic and trans-generational poverty.

CRS Uganda fosters sustained development solutions by working with and through local partners, specifically the Ugandan Catholic Church, to help Ugandans identify and address the root causes of poverty and injustice affecting their lives.

CRS is an industry leader in comprehensive health programming, with expertise in health systems strengthening, nutrition intervention, and children’s health and wellbeing initiatives. In recent years, CRS health programs in Uganda have improved the quality of life of over 200,000 people. CRS continues to help survivors of HIV and AIDS through its programming to support orphaned and vulnerable children, along with their caretakers through the Sustainable Outcomes for Children and Youth project in Central and Western Uganda. Other health programs include Keeping Children in Healthy and Protective Families, Uganda Systems Strengthening and Nuyok, the latter of which is a program aimed at building resilience to shocks, enhancing livelihoods and improving food security for vulnerable families.

Agricultural growth helps reduce poverty. In Uganda, where 69% of households obtain their livelihood from subsistence farming, the agricultural sector is an important component of gross domestic product, and a major source of employment in addition to being the country’s primary source of food. CRS helps smallholder farmers improve their productivity and diversify their income streams. This enables them to move toward market-oriented production that increases their household income and quality of life, and strengthens their resilience to potential shocks. CRS is currently implementing three agriculture projects: Farmer to Farmer, Resilient Vanilla/Coffee Agroforestry Farming Systems, and Coffee Value Chain Development. 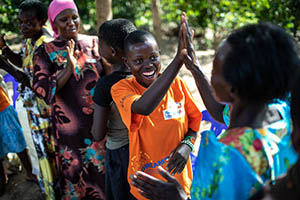 Along with our partners in rural Uganda, we're encouraging HIV positive caregivers & children to adhere to antiretroviral therapy, live healthy lifestyles and focus on their future.

Read about our history in Uganda ›

View All Stories And News From Uganda ›

Catholic Relief Services, founded in 1943, is the overseas relief and development agency of the United States Conference of Catholic Bishops. CRS currently works in over 100 countries around the world with offices across Africa, Asia, Europe, and the Middle East.

CRS began work in Uganda in 1965 in an effort to aid refugees from South Sudan fleeing violence in their home country. In 1995, CRS opened an office in Kampala to better assist the Ugandan people during the armed conflict in the North. Since then, CRS has worked in the areas of agriculture, emergency response and recovery, health, microfinance, peacebuilding, and water and sanitation.

Despite achievements Uganda has made in eradicating poverty, many households remain poor with 21.4% of the population, about 8 million Ugandans, living below the poverty line (Uganda Bureau of Statistics 2017 report). Poverty is aggravated by vulnerability to adverse shocks with a large section of the country is still lagging behind in sanitation, education and child nutrition.

With a continued influx of refugees into the country because of regional instability, the World Bank projects a further decline in economic growth among hosting communities.