It has been brought to our attention that a fake grant disbursement scheme is being circulated via social media (including Telegram and Facebook) by certain individuals claiming to represent Catholic Relief Services in Nigeria. These impersonators are asking interested parties to pay money to qualify for grant disbursements under three categories: as an NGO, a group or as an individual. The perpetrators are using the CRS logo and including the CRS website (which has no information on this supposed grant scheme) in its messages to mislead the public.

· CRS Nigeria is not disbursing grants to the public.

· CRS Nigeria does not request money from individuals to participate in its programs or to be affiliated with the agency in any capacity.

· All opportunities available to the public are advertised openly and always includes formal channels of communication.

Nigeria is the most populous country in Africa and the ninth most populous country in the world. Nigeria faces several socioeconomic problems. Some of the most critical challenges to development in Nigeria include entrenched poverty and unemployment, conflict, hunger, and disease burdens. Nigeria accounts for 23% of arable land across all of West Africa, however Nigeria’s agricultural potential is largely untapped with only about 34 of 84 million hectares being cultivated. Nigeria’s health indicators also remain among the poorest in the world. Nigeria has the second-largest number of people living with HIV globally and accounts for about 9% of the global HIV burden. Millions of children have consequently been orphaned and made vulnerable as a result of the HIV/AIDS epidemic. Nigeria also has the highest burden of malaria in the world; a top cause of maternal and childhood illness and death. Since 2010, Nigeria has been inundated by insurgency in the northeastern region which has resulted in large-scale displacement and loss of life and property. Nigeria currently has the highest number of internally displaced persons (IDPs) in Africa with over 2 million persons displaced as of 2019 (IOM). Immediate challenges for IDPs include food, water, sanitation and hygiene, shelter, health services, and psychosocial support for displaced people and the communities that host them.

In Nigeria, CRS is rolling out hygiene promotion and COVID-19 awareness trainings for community volunteers, partners and beneficiaries. Photo by James Sunday/CRS

Catholic Relief Services began working in Nigeria in the 1960s and was active during the 1967 civil war in emergency response. After the war, the Nigerian government asked CRS and other international development agencies to leave the country. Thirty years later, with the return of democracy after years of military rule, CRS returned to Nigeria in 2000 at the invitation of the Catholic Bishops Conference of Nigeria. In partnership with the Catholic Church, other faith-based and community-based organizations, the private sector, local and international NGOs, and government institutions, CRS implements a range of complex programs with support from a variety of donors and private funds.

CRS works in three priority sectors: agriculture and livelihoods; health systems strengthening (HSS); and emergency response, recovery and resilience.  CRS Nigeria’s HSS programs address HIV/AIDS, malaria, nutrition, and routine immunization/ polio eradication, and have also provided support to orphans and vulnerable children and their caregivers. Under livelihoods, CRS supports households, communities and farmer groups to increase their agricultural production, acquire new skills, diversify their incomes and improve their economic resilience to shocks. In response to the northeast emergency, CRS provides emergency food; shelter; and water, sanitation and hygiene items to internally displaced persons and conflict-affected host communities.  CRS also launched an impact investing initiative to strengthen social enterprises and bolster sustainable, responsible economic growth in the country. CRS and its partners have worked in 32 of the country's 36 states and the Federal Capital Territory with an extensive grassroots network and tremendous capacity to reach the rural poor. 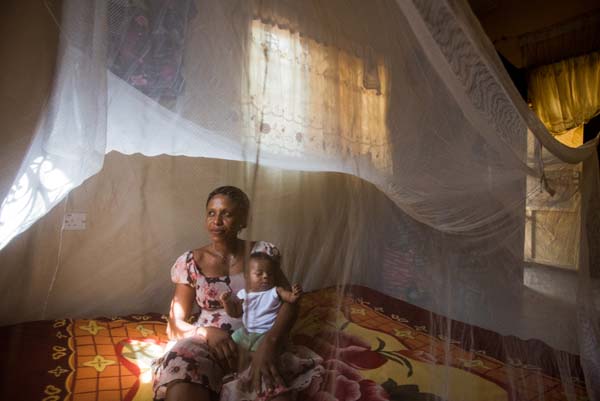 Martha Onuigbo Oluchi sits under a long-lasting insecticide-treated net she received from Catholic Relief Services to help prevent malaria in her household. Photo by Michael Stulman/CRS

Health systems strengthening: CRS has implemented malaria interventions in Nigeria since 2011 with grants from the Global Fund to Fight AIDS, Tuberculosis and Malaria (GFATM); initially as a sub-recipient and then as prime recipient for the grants awarded in 2017 and 2021. The malaria interventions address prevention and case management at the household, community, and health facility levels, and supports strengthening of the country’s malaria health system.  CRS currently hosts the country secretariat of the Core Group Partners Project (CGPP) that supports Nigeria’s polio eradication and routine immunization efforts at the community level. CGPP focuses on northern Nigerian where children under five are at high risk of contracting the polio virus and was integral to the declaration of Nigeria as polio-free in 2020. CRS supported gender-sensitive HIV/AIDS prevention, treatment, care and support services through strengthening the quality of health services delivered in 127 health facilities across the country with funding from GFATM. CRS did this through mentorship to health facilities, improving laboratory service equipment, and fostering efficient supply chain management for pharmacy and laboratory commodities. CRS supports malnourished children under five in conflict-affected households in northeast Nigeria through house-to-house screenings. CRS enrolls children identified with moderate acute malnutrition into the CRS-run supplementary feeding program “Tom Brown”, and children with severe acute malnutrition are referred to outpatient therapeutic feeding programs and health facilities. With funding from Nutrition International, CRS also supported increased vitamin A supplementation coverage among children under five in Gombe and Plateau states using a social behavioral change communications strategy. CRS implemented two vital projects designed to improve access to HIV-sensitive services and support for OVC and their households with funding from USAID. The projects - Coordinating Comprehensive Care for Children (4Children) and Sustainable Mechanisms for Improving Household Empowerment (SMILE) ended in 2018. CRS is also implementing the CDC-funded FASTER (Faith-based Action for Scaling up Testing and Treatment for the Epidemic Response) project which works with government and national and state level partners to strengthen pediatric HIV case-finding and ensure that HIV-infected children access high quality, age-appropriate clinical care and community-based support.

Agriculture: Through funding from the Bill and Melinda Gates Foundation, CRS Nigeria’s Building an Economically Sustainable Integrated Seed System for Cassava in Nigeria (BASICS) project; now in its second phase (BASICS-II), is helping farmers to improve revenue and food supply with high quality certified cassava stems produced through a traceable value chain. The project is developing an economically sustainable and integrated cassava seed system rooted in the commercial production and sale of planting materials in Benue and Kogi states.

Emergency response and recovery: CRS launched its emergency response programming in 2014 in Yobe state by providing emergency WASH and malaria support to internally displaced persons and others affected by conflict with funding from private donors and subsequently USAID OFDA. CRS followed this with an emergency food security program funded by USAID FFP which delivers food assistance to conflict-affected families using electronic vouchers; and a multi-sector support program funded by OFDA which provides WASH and shelter items, as well livelihoods assistance through farm inputs and agriculture training to IDPs and their hosts in Borno and Yobe states. In Nigeria, CRS integrates psychosocial support and social cohesion activities into all emergency programs to support communities and enable conflict-affected households live peacefully with strengthened assets and productivity. 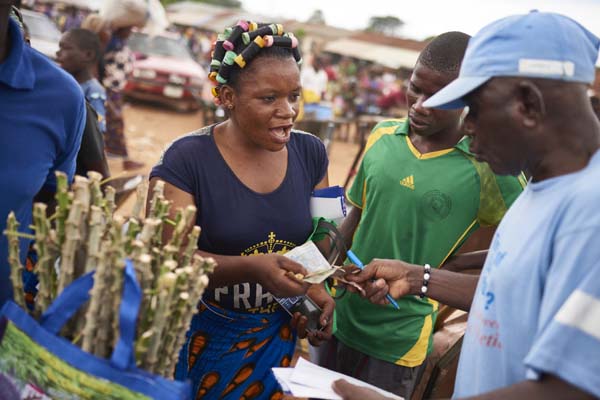 Resilience: CRS is building the resilience of communities and households in northeastern Nigeria through programs that support households to advance from needing humanitarian assistance to recovery, development and self-reliance. CRS supported the livelihoods of poor and vulnerable smallholder farming households in Borno, Yobe and Adamawa states with nutrition, WASH, and farming education through the Feed the Future Nigeria Livelihoods project. CRS is also strengthening the resilience of vulnerable households in Borno, Adamawa and Yobe states by supporting the construction and rehabilitation of infrastructure, livelihoods and social cohesion, strengthening local governance systems, improving access to water for livestock and food production, and delivering extension services to farmers through the German government-funded Stabilization and Reconciliation in the Lake Chad Basin (STaR) project and the USAID-funded Water for Agriculture and Integrated Agriculture projects. With funding from the European Union and the German Government, CRS Nigeria is also implementing the Women Poultry Project which addresses challenges to women’s poultry production such as lack of agricultural extension services and poultry rearing knowledge, poultry disease outbreak, high cost of feeds and limited availability of quality stock for the selected breed. 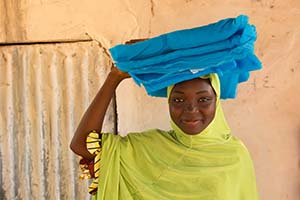 On the road to defeating malaria

CRS is working in 13 states within Nigeria to reach 77 million people to prevent and treat malaria. Reducing malaria in Nigeria will have a big impact in the overall fight to eliminate this disease. See how we’re doing it.

Read about our history in Nigeria ›

View All Stories And News From Nigeria ›

CRS works in three priority sectors: agriculture and livelihoods; health systems strengthening; and emergency response, recovery and resilience.  CRS supports households, communities and farmer groups to increase their agricultural production and diversify their incomes. CRS has also launched an impact investing initiative to strengthen social enterprises and bolster sustainable, responsible economic growth in the country and is developing a strategy to identify investments and support the impact investing ecosystem in Nigeria. In the health sector, CRS Nigeria’s programs address HIV/AIDS, malaria, nutrition, routine immunization and polio eradication, and provide support to orphans and vulnerable children and their caregivers. In response to the Northeast emergency, CRS is providing access to life-saving food; shelter; and water, sanitation and hygiene resources and services for internally displaced persons and conflict-affected host communities.  CRS and partners work in 32 of the country's 36 states and the Federal Capital Territory with an extensive grassroots network and tremendous capacity to reach the rural poor.

CRS was a sub-recipient on the Global Fund’s HIV grant where it achieved the highest performance rating among the National Agency for the Control of AIDS’ sub-recipients for two consecutive terms. In partnership with federal and state health agencies and the National Malaria Elimination Programme, CRS supported implementation of the Global Fund for malaria control as a sub-grantee from 2011 and from 2017 has led implementation of the grant as a prime recipient. With funding from the Global Alliance for Vaccines and Immunization, CRS also provided advocacy and program management training to the Association of Civil Society Organizations on Malaria Immunization and Nutrition.

CRS works with conflict-affected households in the NE to strengthen livelihoods through access to farm inputs, trainings, market and credit linkages, and the rehabilitation of infrastructure. CRS is reaching 30,000 households in Borno and Adamawa states through the Stabilization and Reconciliation in the Lake Chad Region (STaR) project, 4,000 farmers and 50,000 herders through the Water for Agriculture project, deliver extension services in Borno and Adamawa states in partnership with the International Institute of Tropical Agriculture (IITA) and support 7,000 women to raise healthy birds under its Borno and Adamawa Women Poultry Project.

CRS launched its emergency response in Yobe State in 2014, initially providing emergency WASH and malaria programming through private funds, then by a USAID Food for Peace-funded emergency food security program and an OFDA-funded WASH program. In 2016, CRS launched a multi-sectoral response to provide life-saving food, WASH, and shelter assistance as well as agricultural support to facilitate a return to livelihoods in Borno state. To maximize beneficiary choice and promote local market functioning, CRS utilizes an innovative, cash-based e-voucher system as part of markets-based programming.