Tropical Cyclone Idai made landfall with sustained winds of over 110 mph. Families in Malawi, Mozambique and Zimbabwe are displaced and in need of food, water and shelter. Catholic Relief Services—along with local partners—is working quickly to provide emergency support.

Landlocked Malawi ranks among the world's most densely populated and least developed countries. Malawi ranks 170th among the 188 countries on the Human Development Index. More than half of the country lives below the poverty line.

Malawi was hard hit by the HIV and AIDS pandemic but over the last few years has seen HIV/AIDS prevalence rates decrease. Catholic Relief Services continues to work with our partners to help people improve their lives through increased food production, improved health, income and access to water and sanitation. 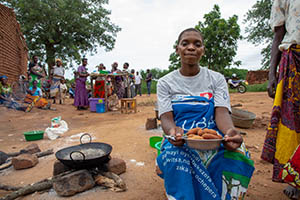 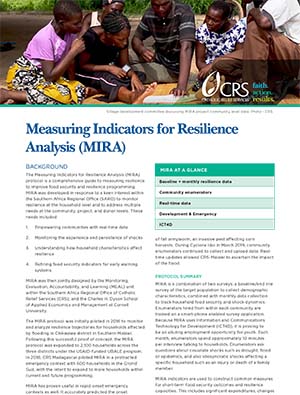 Read about our history in Malawi ›

View All Stories And News From Malawi ›

In response to a major drought across southern Africa in 2001, CRS and seven other agencies formed the Consortium for Southern Africa Food Security Emergency (C-SAFE). The consortium later transitioned into a 5-year Food for Peace development program, led by CRS and CARE and funded by USAID. In 2009, CRS got another 5-year USAID for Peace grant for an integrated food security program, which was implemented  by eight  NGOs. The Wellness and Agriculture for Life Advancement (WALA) program aimed to reduce food insecurity in almost 215,000 chronically food insecure households in southern Malawi. In addition to helping communities prepare for and cope with food insecurity, programs promoted irrigation, improved agricultural practices and a focus on nutrition and health.

In 2014, CRS won another Title II program, entitled Ubale (Partnership in Chichewa). The five-year, $60 million program works through government, community, and private-sector systems and structures to provide full coverage to inhabitants of the districts of Nsanje, Chikwawa, and rural Blantyre.

CRS Malawi is working to deliver culturally appropriate early childhood development and health services to thousands of children, including orphans and vulnerable children such as those affected by HIV and AIDS. In another program, funded by the Conrad Hilton Foundation, CRS Malawi supports Catholic Sisters to improve their technical capacity in early childhood development (ECD), increase organizational sustainability, and enhance their networking and learning on ECD.

Working with the Catholic Church in Malawi, CRS has also managed to develop other innovative, high-quality programs to address continued health, HIV and AIDS, economic empowerment and WASH concerns.