A drought in Eastern Africa has left millions in South Sudan, Kenya, and Somalia facing chronic hunger. Hundreds of thousands of children are acutely malnourished and need urgent nutritional support.

Catholic Relief Services is responding with emergency food aid, water and vocational training for the most vulnerable people, including those who have been displaced from their homes.

A rising economic force in Africa, Kenya is also a growing business hub. Yet, as the country makes political and economic advances, it continues to struggle with large income disparities, considerable poverty, and the effects of climate change. Socially, many Kenyans affiliate themselves closely with one of the country's 43 ethnic groups. Those ties create strong social bonds that at times lead to conflict.

More than half of Kenya's people live in poverty. This is especially severe in the Northern Arid Lands where 74–97% of people live below the poverty line. Most Kenyans are family farmers and many are unable to produce enough safe, nutritious food to maintain healthy lives. Along with degraded land, poor roads and limited access to clean water, they are threatened by erratic weather that causes harsh and recurring droughts punctuated by flooding during rainy seasons. For example, the severe drought in 2011 left more than 10 million people in East Africa close to starvation. Severe drought again gripped the nation in 2017, followed by devastating floods, displacing 332,000 people and killing 183 more in the first half of 2018. 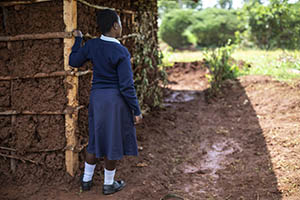 Helping Children Live Out Their Dreams

We believe that every child deserves the opportunity to live out their dreams. That’s why, with the support of PEPFAR and USAID, we’re helping children living with HIV to adhere to their ARVs, stay strong and stay in school. Learn more.

Read about our history in Kenya ›

View All Stories And News From Kenya ›