Burkina Faso is a landlocked country lying in the semi-arid Sahel and Savanna zones of Africa. About 80% of the working population relies on agriculture and livestock rearing to make their living. Most farmers here operate at a subsistence level, and thus remain vulnerable to changes in rainfall (flooding and droughts). As the country develops, it continues to face major challenges including low levels of education (for all children but especially for girls), poor healthcare (especially for pregnant women and children), and weak, uneven levels of economic development which often exclude women and the poor.

Historically one of Africa’s most stable nations, Burkina Faso recently underwent a period of political transition following the resignation of long-term President Blaise Compaore in October 2014, and the country’s democratically elected government came to power in December 2016. Rising insecurity has led to the internal displacement of 100,000 people.

A partner in Burkina Faso’s development since 1960, CRS works with the government, local partners and other members of civil society to address major development challenges through improving agriculture, livelihoods, nutrition, WASH, and education. 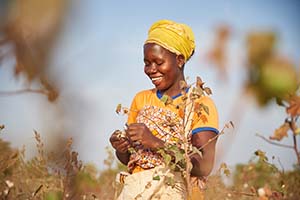 In Burkina Faso, CRS empowers more than 8,300 organic cotton farmers – helping them increase their income while supporting the national farmers’ union to find buyers and promote trade. See how this program is transforming organic cotton farming across the country.

Read about our history in Burkina Faso ›

View All Stories And News From Burkina Faso ›

Catholic Relief Services (CRS) was established in Burkina Faso in 1960, following the invitation of the country's bishops. As the first and longest-standing international development organization in the country, CRS began its work by providing humanitarian and food aid to Burkina Faso shortly after its independence from France. In 1962, CRS expanded its mandate, providing education assistance, especially school feeding. Current programs include education, agriculture, health/nutrition, WASH, emergency response, support to Malian refugees, and savings-led microfinance with an annual budget of $10 million.