Home / Where We Work / Europe

CRS in Bosnia and Herzegovina

More than 20 years after the war, Bosnia and Herzegovina has yet to achieve a peaceful and just society. The country continues to have thousands of displaced people and an unemployment rate of 45%. More than 18% of the population lives below the poverty line. 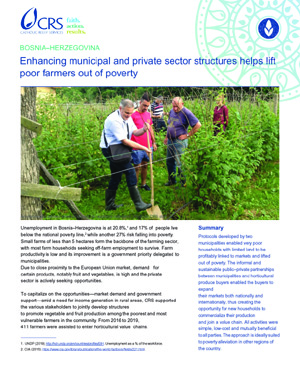 Poor economic conditions coupled with divisive nationalistic political rhetoric, mono-ethnic communities and segregated schools continue to threaten the stability of the region. Returnees, war victims, women victims of rape, their families and citizens in general are still struggling to recover from the violent conflict that left 400,000 people suffering from post-traumatic stress disorder.

Deep ethnic divisions continue to paralyze society and prevent BiH from realizing its strategic potential as a land- and resource-rich neighbor of the European Union. Contending historical and political narratives place blame on different groups for starting the war and committing war crimes. With these opposing narratives defining perceptions at every level of society, reconciliation remains elusive, inhibiting progress towards improved social well-being and a stable political and economic environment for BiH citizens.

Read about our history in Bosnia and Herzegovina ›

View All Stories And News From Bosnia and Herzegovina ›

CRS' History in Bosnia and Herzegovina

Catholic Relief Services came to Bosnia and Herzegovina in 1993 to provide emergency relief to people living under siege in Sarajevo. At the end of the war, half the population of the country of 4 million was displaced. CRS responded by assisting families to return to homes they fled during the war. CRS continues these efforts through rebuilding and constructing housing and infrastructure, promoting livelihoods and education, and providing psychological support. CRS supports peacebuilding by working with war victims' associations to recover from trauma and move toward tolerance, forgiveness and reconciliation.