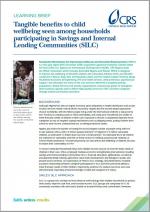 This 4-page brief shares data about the effect of savings groups -- which CRS calls "SILC" (Savings and Internal Lending Communities) -- on vulnerable households in Nigeria. Between August 2015 and September 2017, more than 1,100 SILC groups were formed within the CRS-led "SMILE" program for orphans and vulnerable children (OVC). The groups engaged nearly 25,000 members, including roughly 18,000 women, and accrued total assets of nearly N146 million (approximately US$406,000) by the end of September 2017. By mid 2018, 20% of the groups had graduated and shared out their savings and dividends. In subsequent savings cycles, they continued to operate successfully without program support.

SMILE – Sustainable Mechanisms for Improving Livelihoods and Household Empowerment – ​is a five-year (April 2013–December 2018) cooperative agreement between CRS and USAID. CRS leads the SMILE consortium, which includes ActionAid and Westat. SMILE is designed to improve the wellbeing of 500,000 OVC and 125,000 caregivers in Benue, Kogi, Edo, and Nasarawa states and the Federal Capital Territory, Abuja. Household economic strengthening, HIV and health services, child protection, psychosocial support, and education are some of the core services delivered to targeted priority populations. Nearly 50 local civil society organizations received sub-grants to strengthen their technical capacity and deliver high-quality services to OVC and their caregivers through trained community volunteers.

WHAT DOES “WATER SECURE” MEAN? “Water security” is when water is effectively and holistically managed to support human well-being, socio-economic... END_OF_DOCUMENT_TOKEN_TO_BE_REPLACED

The COVID-19 pandemic elevated the use of digital technology in programming from an opportunity to a fundamental need. The social distancing required... END_OF_DOCUMENT_TOKEN_TO_BE_REPLACED