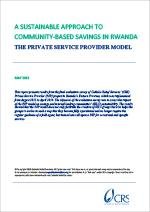 A Sustainable Approach To Community-Based Savings in Rwanda

The Private Service Provider Model
This report presents results from the final evaluation survey of Catholic Relief Services’ Private Service Provider (PSP) project in Rwanda’s Eastern Province, which was implemented from August 2011 to April 2014. The objective of the evaluation survey was to assess the impact of the PSP model on savings and internal lending communities’ (SILC) sustainability. The results showed that the PSP model does not only facilitate the creation of SILC groups but also helps the groups to evolve in such a way that they become fully operational and no longer require the regular guidance of a field agent, but instead can call upon a PSP for occasional and specific services.

The SILC FA Guide Version 5.1.1S is fully compliant with the Sharia (Islamic Law). It is grounded in the experience of pilot deployments in... END_OF_DOCUMENT_TOKEN_TO_BE_REPLACED

In 2021, CRS Ghana launched a pilot of CRS' Peaceful Masculinities approach. This learning report shares lessons learned from the pilot to inform... END_OF_DOCUMENT_TOKEN_TO_BE_REPLACED