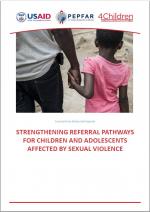 Lessons from Kenya and Uganda

It is widely understood that children affected by sexual violence should access core health and social welfare support, and that a case is built that can be referred to the justice system – all of which require a strong referral pathway within and across sectors.  In 2016 AIDSFree developed Strengthening Linkages between Clinical and Social Services for Children and Adolescents who Have Experiences Sexual Violence: A Companion Guide.  The Coordinating Comprehensive Care for Children (4Children) project was asked to pilot the use of the Companion Guide in Kenya and Uganda.    This publication shares lessons learned from the two pilot experiences including job aids that were developed and reflections on its use.

WHAT DOES “WATER SECURE” MEAN? “Water security” is when water is effectively and holistically managed to support human well-being, socio-economic... END_OF_DOCUMENT_TOKEN_TO_BE_REPLACED

The COVID-19 pandemic elevated the use of digital technology in programming from an opportunity to a fundamental need. The social distancing required... END_OF_DOCUMENT_TOKEN_TO_BE_REPLACED