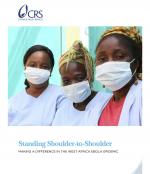 Making a Difference in the West Africa Ebola Epidemic

The West Africa Ebola epidemic of 2014-2016 put into stark relief the global consequences of failing to sufficiently address the destructive effect of years of conflict and civil war in the three most profoundly affected countries – Liberia, Sierra Leone, and Guinea. In fact, it was the glaring weaknesses in health systems in these countries that allowed the disease to become a full-blown epidemic.

CRS, through its longstanding partner relationships, was uniquely positioned to respond in several specific, tailored ways to this urgent, complex situation. This document provides a glimpse into eight CRS interventions across the region that contributed to conquering the outbreak. It articulates how CRS reinforced future health system resilience while addressing immediate needs, even during a complex emergency. Bringing hope and solidarity alongside technical expertise and resources contributed not only to ending the Ebola epidemic but to the ongoing transformation of health systems in all three countries.

In 2021, CRS Ghana launched a pilot of CRS' Peaceful Masculinities approach. This learning report shares lessons learned from the pilot to inform... END_OF_DOCUMENT_TOKEN_TO_BE_REPLACED

The SILC FA Guide Version 5.1.1S is fully compliant with the Sharia (Islamic Law). It is grounded in the experience of pilot deployments in... END_OF_DOCUMENT_TOKEN_TO_BE_REPLACED

Health campaigns are only effective when they can achieve high coverage, at scale. Yet, with paper-based records, it can be difficult to verify who... END_OF_DOCUMENT_TOKEN_TO_BE_REPLACED