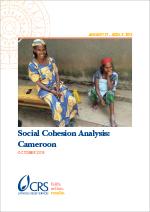 This Social Cohesion Analysis examines the situation in Cameroon in relation to refugees from Central African Republic (CAR), focusing in particular on the situation in the East along the CAR border. The analysis is based on USAID’s Conflict Assessment Framework1  which was conducted for Catholic Relief Services from January 27 through April 5, 2016.

Based on a desk study, key issues that could lead to violent conflict were identified, then key informant interviews were conducted in Yaoundé and eastern Cameroon. The targeted locations for this assessment included areas in the East Region of Cameroon bordering CAR, where CRS’ upcoming UNHCR project is focused: Batouri, Bertoua, and Garoua‑Boulai. In addition, the analysis addressed general national‑level issues through information collected in interviews in the East as well as Yaoundé.

CRS cooperated with two local partners for this analysis (with whom they work on various other projects): Comité Diocésain d’Activités Socio‑Caritatives (CODASCaritas or CODASC) in Batouri, and Commission Diocésaine Justice et Paix (CDJP) in Bertoua and Garoua‑Boulai. The local partners identified nine local participant researchers who, along with three CRS staff members, brought important local knowledge (some had specific peacebuilding or trauma‑healing knowledge) to deepen the analysis. At the same time, these participant researchers benefited from the capacity building provided by the training and could be called upon to assist in future updates of the social cohesion assessment both for their own organizations and for CRS.

This policy analysis examines how existing U.S. government (USG) policies, systems, and structures enable or hinder the localization of the USG’s... END_OF_DOCUMENT_TOKEN_TO_BE_REPLACED