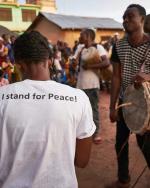 The Global Fragility Act (GFA) presents a fresh opportunity for the United States government to invest in conflict prevention and peacebuilding. By focusing on reducing the risk of large-scale violence and instability, rather than responding to its aftermath, the United States government can proactively promote and invest in stable and productive civil society around the globe. As the US government develops its GFA implementation strategy for the region, it should focus on repairing cracks in society that are being exploited by extremist forces, strengthening social cohesion specifically, while also helping communities to mitigate violent conflict. The following recommendations lay out a roadmap for how this can be achieved:

Catholic Relief Services remains committed to building peace and contributing to stability in Coastal West Africa by engaging local stakeholders as the drivers of their own peace. This is particularly relevant to GFA implementation as the coastal region grapples with ongoing fragilities and the spillover of conflict from the Central Sahel and Lake Chad Basin. Now, more than ever, is the moment to unite all actors around a multi-sectoral strategy building synergy and collaboration.

The ACCIM guide is for staff and partners to help them skillfully integrate accountable and responsive governance in different contexts and programs... END_OF_DOCUMENT_TOKEN_TO_BE_REPLACED

Spatial repellents, which are used to prevent mosquito bites, have not been evaluated for their effectiveness in reducing mosquito-borne diseases in... END_OF_DOCUMENT_TOKEN_TO_BE_REPLACED