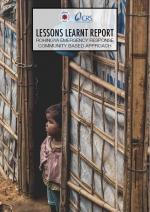 This study captures the experiences and learning from a pilot project at the heart of the Rohingya refugee emergency response in Bangladesh, and the delivery of shelter and settlement upgrades to a small site of 182 households within a small area of the overall settlement. The project piloted a Rapid Participatory Approach in the early months of the crisis, and sought to engage and mobilize the community to serve as an initial step and platform for longer-term community empowerment and resilience. Given the extensive evidence that participatory-based approaches can have lasting and further reaching benefits for communities, this study was designed to investigate the possibility of a community-led approach in an emergency environment as a reference for UNHCR, Sector Partners and other actors. In emergencies, there are often constraints of time, scale, resources, beneficiaries’ understanding of local conditions and capacity, that may limit the level of participation. The study has been designed to investigate the social benefits of the process and how this may have strengthened social cohesion, promoted inclusion, and improved or created systems of governance, considered to be an important outcome of the project for longer term community empowerment and resilience.

WHAT DOES “WATER SECURE” MEAN? “Water security” is when water is effectively and holistically managed to support human well-being, socio-economic... END_OF_DOCUMENT_TOKEN_TO_BE_REPLACED