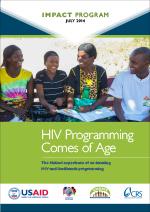 The Malawi Experience of Co-locating HIV and Livelihoods Programming

Integrated HIV, food security and livelihoods programming has been an aspiration pursued by NGOs, donors and host-country governments for more than a decade with varying degrees of success. While the conceptual logic behind integrated programming has been obvious for decades, the “how to” of combining the requisite resources has been less so. Due to its exceptional circumstance of geographic overlap between HIV burden and food/livelihoods insecurity, Malawi is the only country where co-location of the United States President’s Emergency Plan for AIDS Relief (PEPFAR) and USAID’s Food for Peace (FFP) resources has taken place at scale.

This study looks at co-location through two CRS-led community-based programs, the Wellness and Agriculture for Life Advancement program (WALA), a FFP/Title II program that works to improve nutrition and livelihoods, and Integrated HIV Effect Mitigation and Positive Action for Community Transformation (IMPACT), a PEPFAR-supported program designed to improve the well-being of orphans and vulnerable children and enhance access to treatment and care for PLHIV. Both programs implement many of their interventions through support to community structures and formation and strengthening of community groups such as care groups; VSL groups; producer, irrigation and agribusiness groups; and PLHIV support groups.

This policy analysis examines how existing U.S. government (USG) policies, systems, and structures enable or hinder the localization of the USG’s... END_OF_DOCUMENT_TOKEN_TO_BE_REPLACED