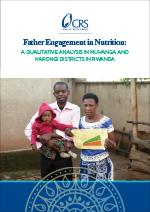 A Qualitative Analysis in Muhanga and Karongi Districts in Rwanda

This report shares key findings on male engagment in child nutrition and maternal and child health from the Embassy of the Kingdom of the Netherlands project to Accelerate Reduction of Stunting of Children Under Two Years (EKN project) in the Muhanga and Karongi districts in Rwanda. The project, which is managed by UNICEF and implemented by CRS through local partners Caritas Kabgayi and Eglise Presbytérienne au Rwanda (EPR), targets pregnant and lactating women and children under two years old in an integrated package of interventions to reduce the incidence of chronic malnutrition, or stunting.

Men are not a primary target for the EKN project; however, in its third year, CRS is interested in understanding how men are in fact playing a role in their family’s nutrition around the first 1,000 days and identifying barriers to greater engagement of fathers. To this end, in-depth qualitative inquiry was conducted in eight sectors of Muhanga and Karongi Districts, utilizing focus group discussions (men, women, and mixed-gender); in-depth interviews with fathers identified by project staff or leaders as role models within their communities (“engaged fathers”); and key informant interviews with chefs du village and with implementing partner staff.

The SILC FA Guide Version 5.1.1S is fully compliant with the Sharia (Islamic Law). It is grounded in the experience of pilot deployments in... END_OF_DOCUMENT_TOKEN_TO_BE_REPLACED

In 2021, CRS Ghana launched a pilot of CRS' Peaceful Masculinities approach. This learning report shares lessons learned from the pilot to inform... END_OF_DOCUMENT_TOKEN_TO_BE_REPLACED