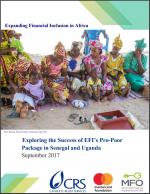 To develop EFI’s understanding of the differentiation on poverty outreach between Normal and Pro-Poor Package villages, the project has complemented the PPI analysis with a community level ethnographic study.

EFI was a 4-year project whose core goal was to ensure that vulnerable households experienced greater financial inclusion to improve their resilience. To this end, EFI formed savings groups using CRS' Savings and Internal Lending Communities (SILC) and Private Service Provider (PSP) methodologies in Burkina Faso, Senegal, Uganda, and Zambia. The EFI project aimed to create 19,200 new SILC groups with 502,320 members and had targeted its areas of operation using financial exclusion criteria; criteria which may well stand as a strong proxy for poverty. To try to bring in poorer households, EFI made critical adjustments to the SILC methodology, known collectively as the "Pro-Poor Package" (PPP) and contrasted with "Normal" SILC programming. The PPP adjustments included, for example, training PSPs to identify and mobilize poor households, replacing a minimum savings with a "target" savings, removing fines for failure to save and reducing the pressure to take loans.

Other research reports related to this project are available here.

In 2021, CRS Ghana launched a pilot of CRS' Peaceful Masculinities approach. This learning report shares lessons learned from the pilot to inform... END_OF_DOCUMENT_TOKEN_TO_BE_REPLACED

The SILC FA Guide Version 5.1.1S is fully compliant with the Sharia (Islamic Law). It is grounded in the experience of pilot deployments in... END_OF_DOCUMENT_TOKEN_TO_BE_REPLACED