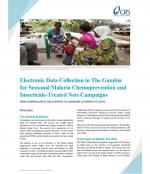 From iFormBuilder & Zoho Reports to CommCare & Power BI to DHIS2

The Gambia is a small country in West Africa. Stretching 450 km along the Gambia River, the country (all 10,689 square kilometers of it) is surrounded by Senegal, except for a 60-km Atlantic Ocean front. The country has a population of 2.1 million. With 176 people per square kilometer, it is one of the most densely populated countries in Africa. Most of the population (57%) is concentrated around urban and peri-urban centers.

The Gambia is one of six countries in the World Health Organization Africa Region that has achieved the 2020 milestone of reducing malaria cases and deaths by 40% compared to 2015. The Malaria Indicator Survey (MIS) of 2017 showed that usage of Insecticide Treated Nets (ITNs) in children under five and women was 62% and 69%, respectively. Additionally, 40% of pregnant women received three doses of intermittent preventive therapy to prevent malaria during pregnancy. These figures point out that more work is needed to ensure universal coverage of malaria control services in the country.

CRS is one of the few international organizations in The Gambia, where we focus much of our work on malaria prevention. CRS has been supporting the elimination of malaria in The Gambia since 2004.

In 2021, CRS Ghana launched a pilot of CRS' Peaceful Masculinities approach. This learning report shares lessons learned from the pilot to inform... END_OF_DOCUMENT_TOKEN_TO_BE_REPLACED

The SILC FA Guide Version 5.1.1S is fully compliant with the Sharia (Islamic Law). It is grounded in the experience of pilot deployments in... END_OF_DOCUMENT_TOKEN_TO_BE_REPLACED

Health campaigns are only effective when they can achieve high coverage, at scale. Yet, with paper-based records, it can be difficult to verify who... END_OF_DOCUMENT_TOKEN_TO_BE_REPLACED