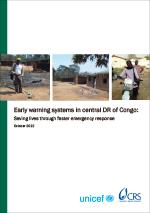 In June 2004, the Democratic Republic of Congo (DRC) was shaken by widespread crises, notably in the East of the country. To ensure that response organizations had the financial and material means to react quickly, the humanitarian community implemented a Rapid Response Mechanism program in October 2004.

Despite this pre-positioning, emergency response was not as rapid as intended, with news of local crises often taking months to reach the humanitarian community. Assistance was often late, poorly adapted to the local context, and uncoordinated, resulting in inefficient use of limited resources. The lack of an early warning mechanism or mitigation strategy in high-risk areas left affected communities in a cyclical state of extreme poverty.

An analysis led by UNICEF and CRS in 2010 revealed that information wasn’t circulating because of a lack of communications technology, the absence of structured circuits for emergency information transmission to policy makers and the lack of local involvement in managing humanitarian crises. To address the situation, UNICEF and CRS implemented an Early Warning System (EWS) in three provinces with at-risk populations. This case study shares the results of the EWS in the areas targeted for intervention.

This policy analysis examines how existing U.S. government (USG) policies, systems, and structures enable or hinder the localization of the USG’s... END_OF_DOCUMENT_TOKEN_TO_BE_REPLACED