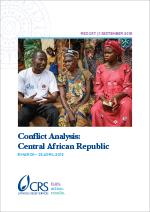 This conflict analysis was commissioned by Catholic Relief Services in Central African Republic (CAR), and is based on USAID’s Conflict Assessment Framework (CAF 2.0). The analysis was conducted from March 5 to April 4, 2016, by teams recruited from among CRS’ partners, along with a consultant and CRS staff. The objectives were threefold: 1) analyze conflict dynamics at national and regional/sub-national levels; 2) identify key factors to inform more effective implementation of social cohesion programming; and 3) identify opportunities for strategic interventions in the promotion and integration of justice and peacebuilding, and social cohesion.

This report follows the lines of the CAF 2.0, first with a review of the context, then conflict dynamics (including key issues, actors, grievances, institutional performance, social patterns), followed by trajectories (trends and triggers), conclusions and response options. This analysis identified the following key conflict dynamics: fragmented security and conflict between armed groups; state services failure; competition over resources; agro-pastoral conflict; and refugee and IDP return.

In 2021, CRS Ghana launched a pilot of CRS' Peaceful Masculinities approach. This learning report shares lessons learned from the pilot to inform... END_OF_DOCUMENT_TOKEN_TO_BE_REPLACED

The SILC FA Guide Version 5.1.1S is fully compliant with the Sharia (Islamic Law). It is grounded in the experience of pilot deployments in... END_OF_DOCUMENT_TOKEN_TO_BE_REPLACED