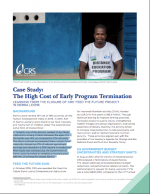 Sierra Leone ranked 184 out of 189 countries on the Human Development Index in 2018. In 2015, half of Sierra Leonians were found to be food insecure, and nearly half of children under five experienced some form of malnutrition.
In Tonkolili, one of the districts hardest hit by Ebola, malnutrition among children between the ages of 6 – 59 months was 41%, as compared to 31% nationally.2 The Ebola outbreak exacerbated Sierra Leone’s food insecurity, disrupting 47% of national agricultural activities and resulted in a 30% decline in production.3 After Ebola was stamped out, the Government of Sierra Leone launched an ambitious recovery plan, with the US among the largest donors.

This policy analysis examines how existing U.S. government (USG) policies, systems, and structures enable or hinder the localization of the USG’s... END_OF_DOCUMENT_TOKEN_TO_BE_REPLACED