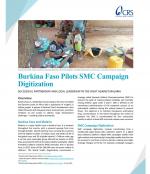 Successful Partnership and Local Leadership in the Fight Against Malaria

Burkina Faso is a landlocked country lying in the semi-arid Sahel and Savanna zones of Africa with a population of roughly 21 million people. A partner in Burkina Faso’s development since 1960, CRS works with the government, local partners, and other members of civil society to address major development challenges – including malaria prevention. Malaria is a major health issue in Burkina Faso. It is endemic throughout the country, with a seasonal upsurge from June through October. Overall, Burkina Faso is among the countries with the highest number of malaria cases and deaths (3.4% of the global cases and 3% of global deaths). Children aged under 5 years are the most vulnerable group affected by malaria; in 2019, they accounted for 67% of all malaria deaths worldwide. USAID President’s Malaria Initiative (PMI) estimates that in Burkina Faso, in 2022, there will be 294,446 cases of severe malaria in children. The World Health Organization recommends a strategy called Seasonal Malaria Chemoprevention (SMC) to prevent the peak of malaria-related morbidity and mortality among children aged under 5 years. SMC is defined as the intermittent administration of full treatment courses of an antimalarial medicine during the malaria season to prevent illness, with the objective of maintaining therapeutic antimalarial drug concentrations in the blood throughout the period of greatest risk. SMC is recommended for four consecutive months in which at least 60% of annual malaria cases occurred.

To improve the accuracy of malaria data collected, the Ministry of Health (MoH) of Burkina Faso requested that the National Malaria Control Program (NMCP) pilot the digitization of data collection in their annual SMC campaign in the Tougan Health District. To enable the digitization, CRS’ technical and management support was requested by the NMCP. Data collection was conducted using the Tracker and Capture applications within the DHIS2 platform, as the latter is the NMCP’s platform of choice. The results of the pilot will help national government health agencies such as the NMCP and the National Directorate of Health Information Systems (DSIS) transition from a paper-based system to a more robust and sustainable digitized data collection platform for future nationwide malaria campaigns.

The ACCIM guide is for staff and partners to help them skillfully integrate accountable and responsive governance in different contexts and programs... END_OF_DOCUMENT_TOKEN_TO_BE_REPLACED

Spatial repellents, which are used to prevent mosquito bites, have not been evaluated for their effectiveness in reducing mosquito-borne diseases in... END_OF_DOCUMENT_TOKEN_TO_BE_REPLACED