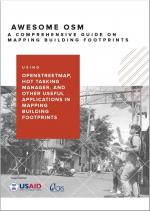 The Awesome OSM: A Comprehensive Guide on Mapping Building Footprints was prepared by students from the University of the Philippines with help from CRS. It serves as a guide for Local Government Units (LGUs), student-mappers, researchers and other volunteers on the process of mapping and validating building footprints in OpenStreetMap (OSM) via desktop computers, mobile devices, and field papers. OpenStreetMap (OSM) is a collaborative project by Steve Coast designed to create a free and editable map of the world. It is an open, available, and global dataset of spatial and infrastructure data. Users draw maps on computers and mobile phones rather than paper, however, changing a map on a device is usually similar with drawing on paper. Lines are still used to represent roads, fields, while symbols are used to represent schools, hospitals, and other important buildings. It is important to remember that OSM maps are saved on the internet: anyone can access them at any time without spending any money. Through this manual, anyone will be able to map and see the results of what they mapped in OSM.

The SILC FA Guide Version 5.1.1S is fully compliant with the Sharia (Islamic Law). It is grounded in the experience of pilot deployments in... END_OF_DOCUMENT_TOKEN_TO_BE_REPLACED

The COVID-19 pandemic elevated the use of digital technology in programming from an opportunity to a fundamental need. The social distancing required... END_OF_DOCUMENT_TOKEN_TO_BE_REPLACED

Small-scale farmers in developing countries depend heavily on their natural resources: water, soil and the broader ecosystem. They need to use these... END_OF_DOCUMENT_TOKEN_TO_BE_REPLACED