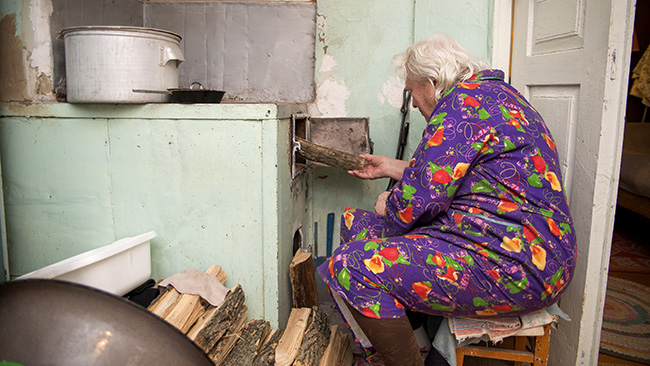 In frigid temperatures of Izyum, eastern Ukraine, a displaced grandmother struggles to keep a rural cottage warm. Photo by Volodymyr Nechaiev for CRS

CRS has come to the immediate aid of more than
45,000 displaced people since the crisis began in 2014

With brutally cold weather quickly approaching in Ukraine, Catholic Relief Services’ (CRS), lifesaving support to tens of thousands of people displaced by violence is more important than ever.

Working with Caritas Ukraine and Caritas Spes Ukraine, CRS has provided immediate assistance to more than 45,000 people in the eastern part of the country, including in the hardest-hit region of Donetsk. Another 23,000 people will receive such help in coming months.

“The real issue right now is winter,” said Erik Heinonen, program manager for CRS Ukraine. “When winter gets here costs go up. Having appropriate shelter becomes a much bigger deal.”

Since the conflict between government forces and separatist groups began in the spring of 2014, it’s estimated that upwards of 1.4 million people have been displaced internally, including as many as a half million children. What’s more, another million people have fled to neighboring countries like Russia.

According to Heinonen, a recent CRS survey of displaced Ukrainians found that more than half said they are worse off now than they were a year ago.

He called those results “alarming,” noting that many displaced Ukrainians are living off dwindling savings, while unemployment continues to be relatively high, especially among the displaced population. Also, reduced government subsidies have driven up heating costs, while the depreciation in the currency and an increased inflation rate have made the situation that much harder.

"All of those wintertime expenses in terms of utilities, warm clothing, and blankets pile on top of general expenses like food and rent needed to keep the household functioning,” Heinonen explained.

CRS has provided cash grants to 23,000 displaced people to help them with rent, food and other necessities.

In an effort to stimulate the economy, CRS has provided 165 families with additional cash grants to help re-start businesses. Early results show that nearly half of grantees were able to generate revenue within a few weeks of receiving the money. CRS recently began its second round of such grants.

“We want to get more people employed,” Heinonen explained. “We will increase the grant size so that recipients will be more likely to create businesses that employ several people.”

“It was really touching to see the relationships that grew between our staff and the children,” Heinonen said. “Young children can form strong relationships very quickly, and that was very much the case in our child-friendly spaces.”

Heinonen says that with the weather about to get significantly colder, the needs of displaced Ukrainians will only increase in the months ahead.

“In Ukraine, we’re talking about 1.4 million people who are officially displaced,” he said. “That’s a lot of people who will be scraping the money together to get by.”

Nikki is the Media Relations Manager for CRS and connects journalists to regional stories and sources related to the agency’s life-saving development work. Previously, Nikki worked as the Communications Officer for the Middle East, Europe, and Central Asia. She has covered CRS’ response to the Syrian refugee crisis and the mass displacement of... END_OF_DOCUMENT_TOKEN_TO_BE_REPLACED