NAIROBI, KENYA, January 14, 2016—Small, family farmers in Africa purchase more than half of their seeds every year through local markets and other informal sources—neglected outlets that present a major opportunity for improving access to better crop varieties crucial to dealing with climate, nutrition, and other production challenges in a region where food security remains a major concern. That’s a key finding from comprehensive new research released today in the Journal Food Security that examined some 10,000 seed transactions across five African countries and Haiti.

The investigators discovered that, contrary to conventional wisdom, it appears most smallholder farmers in Africa—the continent’s dominant producers who typically cultivate crops on about a hectare or less of land—are not reliant on seeds saved from year to year. Instead, some 55 percent of seed they plant is purchased—mainly from local markets or from friends and fellow farmers. 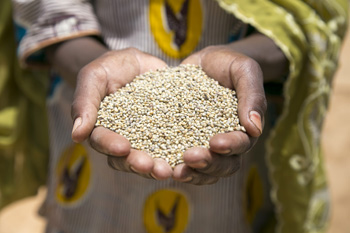 Kolema Boucar holds food she has been able to purchase with support from Catholic Relief Services' Cash-for-Work project in Gamdou village, Niger. Photo by Michael Stulman/CRS
Local markets were found to be particularly important for legumes, accounting for 64 percent of seeds for crops like beans and cowpea that are an essential source of protein and other nutrients. In contrast, a relatively small proportion of transactions—2.4 percent overall with no country higher than 17.4 percent—involved “certified seed” produced by private sector companies and sold through farm supply stores or “agrodealers.”

“Our work is significant because it indicates smallholder farmers are far more likely to purchase seed rather than rely on saved seed,” said Louise Sperling, a Senior Technical Adviser at Catholic Relief Services (CRS) who led the research while working with the International Center for Tropical Agriculture (known by its Spanish acronym CIAT). “The challenge is that most of their purchases are going through informal channels like local markets, which don’t have access to many of the new crop varieties that could help farmers improve nutrition and adapt to climate change.”

Sperling and her co-author, Shawn McGuire of the University of East Anglia (UEA), said their findings indicate that supplying smallholder farmers with a wider selection of crop varieties is a significant and untapped business opportunity—for both formal and informal seed sellers.

That’s particularly true in contemporary Africa, they said, where international institutions and national governments are aggressively investing in developing new crop varieties specifically intended to help smallholder farmers deal with a range of challenges. Varieties that soon could be available include beans that can withstand high temperatures, potatoes that are resistant to late season blight, and maize that can tolerate droughts, which are becoming more common due to climate change.

“Innovations in crop science will be of little value to smallholder farmers if they are not matched by innovations in seed delivery,” McGuire said. “We need to see the formal sector more firmly focused on serving the needs of smallholder farmers and it is especially important to realize the potential of local markets as a source for seeds. Our research shows that local markets are used by most farmers and especially the more vulnerable. Yet local markets receive almost no attention from development professionals or governments.”

The study’s conclusions were drawn from extensive interviews with farmers in Kenya, Malawi, South Sudan, the Democratic Republic of Congo, Zimbabwe, and Haiti that were conducted as part of the Seed System Security Assessment (SSSA). Launched in 2008, the assessment is part of SeedSystem.org, a collaboration involving CRS, CIAT, the UEA School of International Development, the Pan-African Bean Research Alliance (PABRA), and the United States Agency for International Development (USAID). It now contains extensive information on over 10,000 farmer transactions across ten different seed sources for 40 different crops.

"SeedSystem.org is a resource that helps the humanitarian and development community better understand the choices available to farmers that can support their livelihoods and reduce the risks inherent in agriculture,”  said  Julie March, Agriculture and Food Security Advisor at USAID’s Office of U.S. Foreign Disaster Assistance.

Sperling and McGuire note that there has long been anecdotal evidence pointing to the importance of local markets as a source for seed. But they said their study is the first to extensively quantify, crop by crop, where farmers obtain seed. For example, they found that  even in countries where agrodealers owned more of the market—they accounted for 11.6 percent of sales in Kenya and 17.5 percent in Malawi—most of the sales involved only a few crops, chiefly maize in Kenya and maize and cotton in Malawi. Meanwhile, agrodealers supplied less than one percent of legumes and vegetatively propagated crops like sweet potatoes.

“This is an important gap area for clusters of crop types key to basic nutrition and calorie provision,” the study states.

Mastering the science of delivery: Getting high quality seed to smallholder farmers

Sperling and McGuire said their research points to the need for action on two fronts. First, they believe formal seed producers and sellers would be wise to embrace the smallholder farmer as their core customer. The study points to Kenya’s Dryland Seeds as a company that has generated significant revenue by providing legume seeds (beans, cowpeas, green grams and pigeon peas) and in the smaller packages most smallholder farmers prefer. Sperling and McGuire also believe seeds for new crop varieties would reach more farmers if they were available in supermarkets and small, “mom and pop” stores that often are more common in remote communities than agrodealers.

But the bigger challenge, they said, is finding ways to make new crop varieties available through informal sellers, like the seed and grain traders who often travel to remote regions, serving “the last mile” to farmers that many worry may never be bridged by formal sellers.

“Selling seeds through more informal channels poses challenges for quality assurance, but they are not insurmountable,” Sperling said. “We can’t wait for formal channels like you find in Europe and the United States to fully mature in Africa, particularly when they are failing to move an entire category of critical crops like legumes. The bottom line is we need to be more open to new ways of getting seed to farmers and not let the perfect be the enemy of the good.”

This animated video breaks down the complexities of seed market.

The University of East Anglia (UEA) is among the top 1% of universities globally (Times Higher Education World Rankings 2014-15) and placed 10th in the UK for the quality of its research output (Research Excellence Framework 2014). Also known for its outstanding student experience, it has achieved a Top 10 rating in the National Student Survey every year since the survey began. UEA is a leading member of the Norwich Research Park - one of Europe’s largest concentrations of researchers in the fields of environment, health and plant science. The city of Norwich boasts more highly cited scientists than any UK city outside London, Oxford and Cambridge. www.uea.ac.uk.

The International Center for Tropical Agriculture (CIAT) – a member of the CGIAR Consortium – develops technologies, tools, and new knowledge that better enable farmers, especially smallholders, to make agriculture eco-efficient – that is, competitive and profitable as well as sustainable and resilient. Eco-efficient agriculture reduces hunger and poverty, improves human nutrition, and offers solutions to environmental degradation and climate change in the tropics. With headquarters near Cali, Colombia, CIAT conducts research for development in tropical regions of Latin America, Africa, and Asia. CGIAR is a global research partnership for a food-secure future. Its science is carried out by the 15 research centers who are members of the CGIAR Consortium in collaboration with hundreds of partner organizations. www.cgiar.org

Seed-based agricultural recovery is more complex than commonly assumed. These 12 practice briefs offer advice on how to sustain and strengthen seed... END_OF_DOCUMENT_TOKEN_TO_BE_REPLACED

This joint assessment, which was carried out in May 2010 by ten organizations, assesses the impact of the January 12, 2010, earthquake on households... END_OF_DOCUMENT_TOKEN_TO_BE_REPLACED