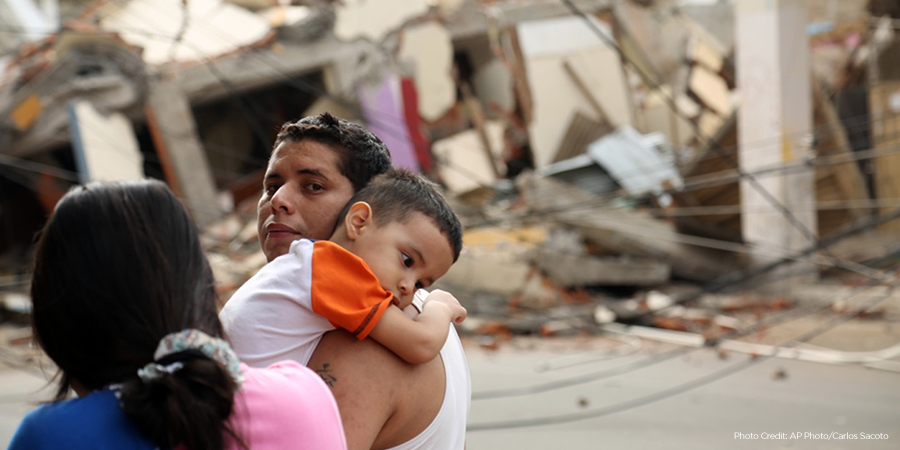 QUITO, ECUADOR, Updated May 17, 2016 – Catholic Relief Services (CRS) teams in Ecuador are constructing shelters for thousands of families left homeless by the 7.8 magnitude earthquake that hit Ecuador on April 16, killing nearly 700 people and injuring more than 12,000. CRS teams have also started delivering hygiene kits that include soap and toothbrushes to 800 families in Esmeraldas and Manabí, two of the hardest-hit provinces.

In the days after the earthquake, CRS emergency teams traversed some 2,000 kilometers of hard-hit coastal terrain to determine the magnitude of the damage and the immediate needs of those most affected.

“People were understandably very rattled,” said Hollywood, who was a member of the CRS team that responded to Peru’s earthquake in 2007. He said the people he spoke to either cried or were becoming frustrated.

“There’s no in between—because of so much loss and so much need.” 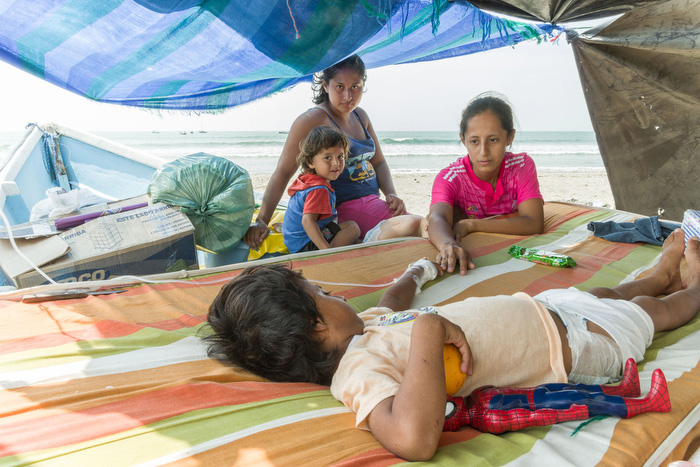 A family in La Chorrera, Ecuador, who lost their home in the earthquake. Photo by Eduardo Naranjo for CRS
The damage is so widespread in some places that complete resettlement will be needed. It’s not just homes that have been destroyed but also important infrastructure such as schools, hospitals and churches. All told, 7,000 buildings were destroyed in the earthquake and 26,000 people are in need of shelter. In total, it is estimated that 1.2 million have been affected.

CRS teams are distributing the tarps now and have begun helping families build shelters with frames made from local materials such as bamboo or sugarcane and zinc for the roof. They have also started delivery of hygiene kits that include soap and toothbrushes to 800 families in Esmeraldas and Manabí, two of the hardest-hit provinces.

Meanwhile, CRS and Caritas Ecuador have started to help communities rebuild water systems that were destroyed by the earthquake and build latrines. They are also looking at ways to help families that are dependent on farming and fishing generate income, as much of their land and equipment has been damaged.

All told, CRS plans to reach 20,000 families with services that include shelter, water and sanitation and psychological support. In addition to its Quito office, CRS has established a sub-office 35 kilometers from the earthquake’s epicenter in Cojimíes, with a warehouse at a local parish and temporary office space located at 40 kilometers north of Pedernales. 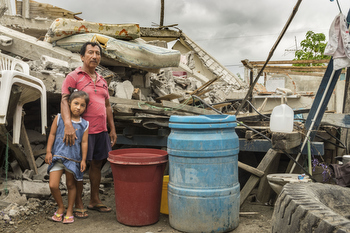 A family in La Chorrera, Ecuador, stands in the rubble of their home. Photo by Eduardo Naranjo for CRS
CRS has worked in Ecuador since the 1960s. Over the past five years, CRS has greatly invested in training Caritas diocesan members on risk mapping, contingency planning, first responders, and other measures in areas prone to flooding, seismic activity, and extreme weather. CRS also has ongoing programming in the affected areas with the Scalabrini Mission Sisters that provide critical humanitarian, psychological, social, livelihood and legal aid to Colombian refugees.

This release is available in Spanish.

Based in Baltimore, Maryland