Sahel Crisis: Facts and How to Help

West Africa's Sahel region is home to some of the world's most challenged communities where families are confronted with chronic food shortages, environmental degradation, a harsh climate that brings droughts and floods, and high unemployment. From 2015 to 2020, the number of violent attacks increased eight-fold in Central Sahel.

An unprecedented surge in violence, with more than 1,000 attacks against civilians reported in the last 12-months, has triggered a whole new level of desperation facing families in Niger, Mali and Burkina Faso as well as threatening neighboring countries such as Ghana. A multitude of different armed groups have burned villagers alive, killed others with bombs and pulled men off buses to execute them by the roadside, in scores of attacks on civilians.

The violence is forcing families to flee their homes, traveling for weeks or even months, leaving everything behind and risking their lives to find safety in other areas.

Displaced people are being received in communities already struggling with limited resources. As host communities swell, food and nutrition insecurity is increasing, and access to clean living situations is becoming a significant challenge. Climate shocks such as devastating floods, continue to devastate livelihoods and communities. Flooding in 2020 destroyed homes, goods, crops, and infrastructure in Burkina Faso, Mali, and Niger.

Violence in the Sahel Region

Since the uprising in Northern Mali in 2012, the security situation has gone from bad to worse as the country has been rocked by continued violence, poor implementation of a peace accord and 2 coup d'etats. Communities face multiple threats, including climate change, violent extremism, political unrest, and COVID-19 This contributes to a worsening humanitarian situation with more people being forced from their homes than ever before, and a worrying impact on vital social services, like schools and health facilities. Complicating factors, the democratically elected government was recently upended in a coup d'etat that has further imperiled the country's response to violent actors and social unrest within its borders.

Today there are more than 402,000 displaced people in Mali – overwhelmingly women and children – and 5.9 million people in need of life-saving assistance. More than 400,000 children have been affected by the closure of schools, primarily due to insecurity.

Burkina Faso has been known for its peaceful coexistence of religious groups and over 60 different ethnic groups for decades. More recently, armed groups have been trying to force division between them in an attempt to stoke violence and gain influence. The resulting conflict between communities destabilizes the region and has led to the formation of many local militias which complicate the security landscape. Deadly attacks are a near-daily occurrence in the north and east of Burkina Faso and its human toll is surging at a dramatic rate.

The number of displaced people in Burkina Faso rose ten-fold in 2019 alone, reaching a total of 1.4 million in 2021. Next year, that number will likely continue to rise. It is now the fastest-growing displacement crisis in the world, forcing more than 1.4 million people to flee their homes.

Niger continues to struggle with responding to two separate humanitarian disasters, one along the border with Nigeria and the other in the Tillabéri region. The people living in Tillabéri region, a border area with Mali and Burkina Faso, include more than 234,000 refugees from Mali and over 300,000 displaced people.

Many people have been forced to leave their homes, some multiple times, to escape violence by armed groups and other opportunists. Most of the people who fled the violence are women, children and the elderly. To date, approximately 70 health centers have been closed due to insecurity in the region. Humanitarian and development workers have been targets and killed indiscriminately in Niger.

As with most conflicts, children across the region are being affected to the greatest extent. It is estimated that they account for more than 50% of displaced people in the region. Teachers are fleeing. Classrooms are empty. Over 4,000 schools were closed because of the violence in early 2020 but all schools in the region were closed in response to COVID-19 precautions. Some schools in secure areas have reopened. Students in insecure areas are the most affected; they do not have access to virtual lessons or donor-provided lunches that are usually given out at schools. In the absence of schools or livelihoods, adolescents increasingly turn to organized crime and seek to join violent groups in exchange for payment.

Ways to Stop the Sahel Crisis​

1. Scale Long-Term Development Programming
At a time when peace and stability are at increased risk, working with our partners on sustainable development programs is key to building people's self-reliance, thus empowering West Africans to live dignified lives without violence. This includes:

2. Increase Humanitarian Assistance
Given the large number of displaced persons in the Sahel and the ongoing threat of violence and instability, a bigger humanitarian response is needed to provide life-saving assistance to those who are most vulnerable. To stop future violence, we must also help people in the region provide for themselves and their families. This includes:

3. Engage Government Institutions
The Sahel Peace Initiative will also engage policymakers at national, regional and international levels, including advocacy for robust funding that prioritizes a holistic response and allows for a coherent transition between humanitarian and development programming.

For more detailed background and policy recommendations to address the situation, you can read Peace in the Sahel: Policy Recommendations for the U.S. Government.

The Catholic Church of West Africa expressed an urgent need to explore how CRS and the Church can help West African communities overcome obstacles and build lasting peace.

Together, we launched the Sahel Peace Initiative to raise awareness of the crisis, advocate for change, and mobilize humanitarian and development actions to save lives in Mali, Burkina Faso, Niger, Cote d'Ivoire, and Ghana. We have also completed a conflict assessment of the Liptako-Gourma region, which borders Burkina Faso, Mali, and Niger to help us better understand one part of this complex issue. This report, called Steps Towards Peace, is available for all governmental partners, private partners, donors and members of the public to review.

To date, CRS and local partners have provided more than 320,000 people in Mali, Burkina Faso, Niger - both those displaced as well as families hosting them - with cash distributions, water, food, and shelter since 2019. We are also continuing our work to provide healthcare, education, and agricultural assistance like introducing new technologies, crop varieties, and techniques, as well as carrying out peacebuilding activities, all with the goal of preventing and de-escalating the humanitarian and security crises. 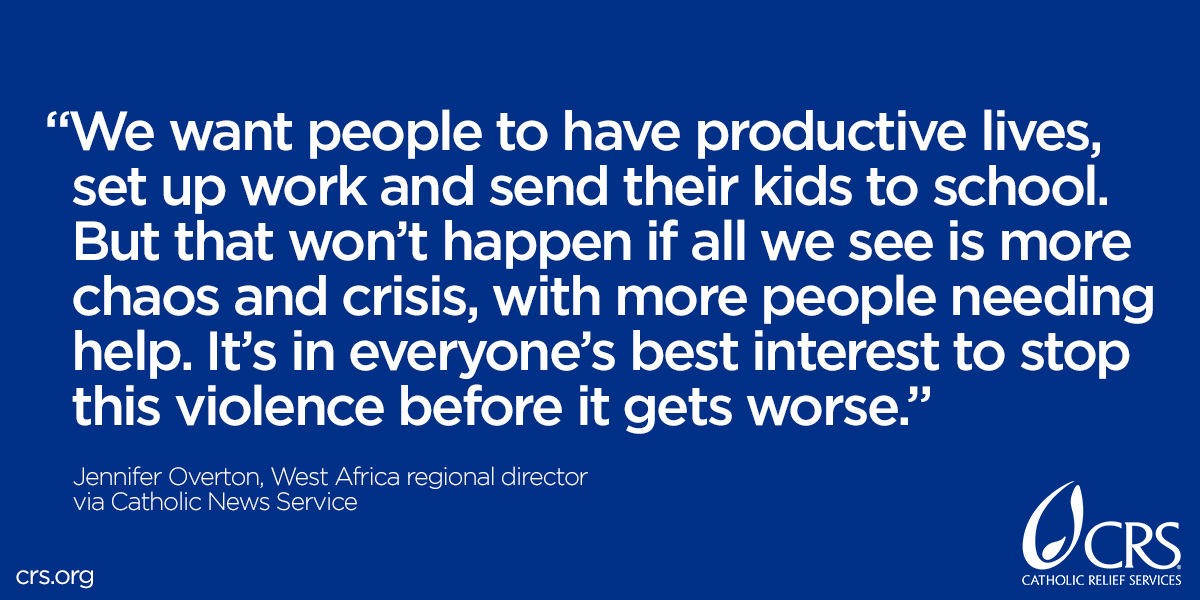 Which countries in the Sahel are most affected by violence?

Who lives in the Sahel?

Home to about 63 million people (20.8M in Burkina Faso, 19.5M in Mali, and 22.7M in Niger), the Sahel region encompasses over 100 ethnic groups, but these groups have largely lived a peaceful coexistence. Historically, the majority of the region is Muslim, but Christians are well represented and respected across the region. Burkina Faso in particular is well known for the peaceful coexistence of Muslims and Christians.

What are the root causes of violence in the Sahel?

While many people describe the escalating conflict in the region as religious, we know that a lack of economic opportunities, poverty, and climate change are some of the real underlying causes. Terrorists and other armed groups are exploiting religious and ethnic differences to fuel a conflict.

What will stop the violence?

A military intervention can halt the violence but won't address the root causes. Beyond military action, we need to develop and support sustainable development programs, which are key to builing people's self-reliance and empowering West Africans to live dignified lives without violence. In addition, promoting dialouge between communities and supporting local religious leaders to work together is essential for decreasing the chances of conflict in the future.

What's at risk if the violence keeps spreading?

While Niger, Burkina Faso, and Mali continue to be at the center of the conflict, recent attacks in cities along the borders between Burkina Faso and Benin, Cote d'Ivoire, and Ghana highlight the risks that the violence could spread throughout the West Africa region.

If the violence continues to spread, global investments and any development gains made in the region over the past decade could be set back or entirely erased. Further, the violence worsens an already dire humanitarian situation. Communities could face food shortages, civilian deaths will continue to increase, and the region could devolved into one of the largest humanitarian crises in history, stretching across upwards of 5 countries.

How else can you help?

Create an individual fundraiser to raise money for this important cause >

Can you help us to get the word out?

Thank you for your compassion. Your support saves lives.

This report assesses the threats that climate change poses for vulnerable populations and ecosystems in Niger, Burkina Faso and Mali. The report... END_OF_DOCUMENT_TOKEN_TO_BE_REPLACED