Catholic Relief Services (CRS) is stepping up its emergency response in Ethiopia, where the current El Niño drought is now putting more than 4.5 million people at risk of increased food insecurity. Using its existing infrastructure and with the generous support of the United States government, CRS and its partners are distributing food to over one million of the most vulnerable people, as well as seeds ahead of the next planting season.

The current drought in Ethiopia and other parts of East Africa is the result of two failed rainy seasons brought on by the effects of climate change and the impacts of the El Niño weather phenomenon. As a result, the Government of Ethiopia announced in August that the number of people in need of food assistance has almost doubled from 2.9 million to some 4.5 million people.  Based on previous El Niño cycles, many predict the number of Ethiopians in need of food assistance will continue to increase as we move into 2016.

“The people of Ethiopia have faced the impact of climate change for some time and this year, the the lack of rain brought on by El Nino has robbed people of their harvests,” said CRS East Africa Regional Director, David Orth-Moore. “People who depend on their livestock are equally at risk as there aren’t sufficient grazing pastures available.”

In addition to emergency food distributions, CRS plans to hold seed and voucher fairs in the coming months, so farming families who’ve lost their crops and thus their seeds, will be able to plant next year. CRS will work with commercial seed companies as well as local producers and traders to sell different varieties of seeds at fairs, where farmers can redeem them with vouchers. This model – compared to blanket seed distributions - allows farmers to choose the varieties and quantities they need, and the fairs strengthen the local economy. In addition, CRS will provide fodder, feed and vaccinations for livestock.

“We don’t Know When It Will Rain” 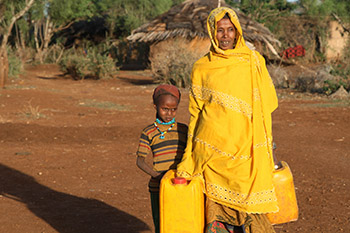 Fatuma Ali Sali, age 50, and her family in the Ethiopian district of Belina Arbaare are some of the hundreds of thousands of people in Ethiopia faced with the effects of climate change. Photo by Kim Pozniak/CRS
“The Government of Ethiopia has been making great strides in combating hunger and poverty over the past two decades. However, coping with the effects of climate change and the El Niño phenomena such as prolonged drought, erratic rainfall and land degradation are posing challenges for rural communities to meet their basic needs,” said CRS Ethiopia Country Representative, Matt Davis. “Harvests are often meager or even lost. Smallholder farmers have lost the ability to predict weather patterns and adapt their farming methods. In pastoralist communities, where families depend on livestock for an income, a lack of rain means low prices for emaciated animals.”

“We’ve seen the impact of climate change harm our lives time and time again. The problem of drought has been getting more and more serious over the last 20 years,” said Fatuma Ali Sali, a 50-year-old woman from eastern Ethiopia who depends on a small plot of land and some animals. “Even last year, we could [collect] water but this year, we don’t know when it will rain or if we can collect water. Because of food shortages, the small children are facing many health issues. Many children in the community are malnourished.”

CRS is using and expanding on existing programming to respond to the growing emergency. Through the Joint Emergency Operation Program (JEOP), a USAID-funded, CRS-led program that is implemented through a consortium of international and national NGOs, CRS supports the Government of Ethiopia’s emergency food aid program, providing life-saving support to families affected by climate change related crises. The program serves people in five regions of Ethiopia, providing food commodities from the U.S. to rural communities in Ethiopia to ensure that the most vulnerable people receive the needed assistance in a timely manner.

In addition to responding to emergencies, CRS has a number of longer-term programs that address the effects of climate change on the poorest communities. Earlier this year, CRS along with its partners launched a USAID funded three-year program, Resilience Through Enhanced Adaptation, Action-Learning and Partnership (REAAP) that supports communities to adapt to climate change related issues by using their own resources – human and natural – to address water shortages, land degradation and flooding, for example.

“We have to teach the next generation – my child – the knowledge of how we can address climate change,” said Akuro Wori, a young woman who participated in a CRS training earlier this year on how her community can become more resilient. “I’ve learned about hazards and vulnerability. Based on what I’ve learned so far,” she says of the training, “the community first needs to identify its problems. If we implement what the community plans, I’m sure we can achieve our goals and be successful.”