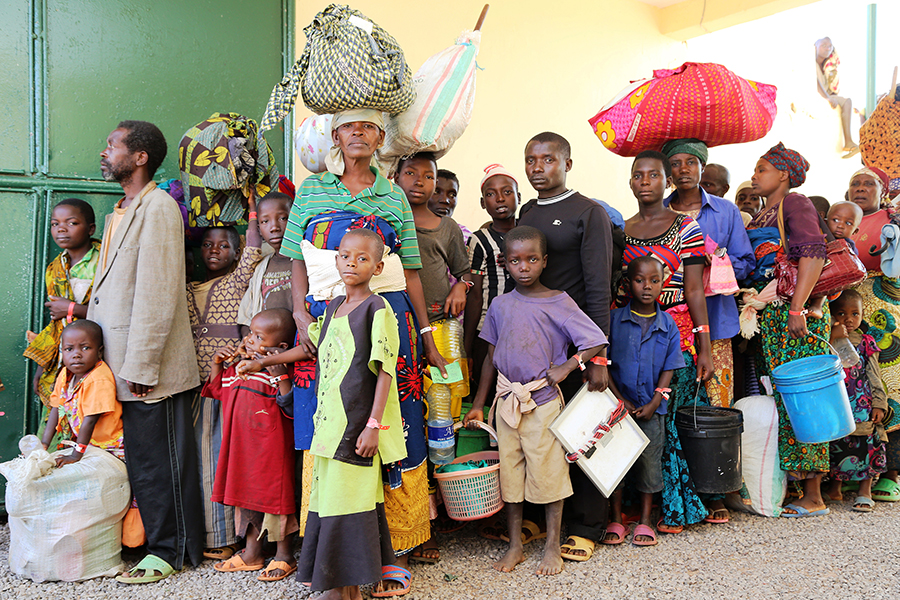 Baltimore/Nairobi, May 28, 2015 – Catholic Relief Services (CRS) and Caritas are helping some of the nearly 90,000 refugees from Burundi, the majority women and children, who have spilled over the borders into neighboring Tanzania, Rwanda, and the Democratic Republic of the Congo since violence erupted in their country in late April.

“I walked along the lakeshore for 12 hours to get here,” said Judith Ndayankundwa, who said she is 100 years old, a day after she arrived at Lake Tanganyika Stadium in Kigoma, Tanzania in the company of her 12-year-old granddaughter, who was off waiting in line to get food for them at the lunch distribution.

The food was being provided by local CRS partner Caritas Kigoma, to the thousands crowding into the soccer stadium, swelling its population to three times the 1,800 it is meant to hold. Most were tired and hungry after a day-long journey from Kagunga, a port town just over the border from Burundi. Many had already walked for days to get to Kagunga.

CRS and Caritas are managing all operations at the stadium, including the registration of upwards of 2,000 new arrivals daily and providing three hot meals per day prepared at the local parish and trucked to the stadium.

Ndayankundwa and her granddaughter are among the early 47,000 people who have arrived on boats and on foot, fleeing southward from Bujumbura, Burundi’s capital, along Lake Tanganyika to a number of entry-points into Tanzania. More than 23,000 have fled overland to Rwanda in the north and almost another 10,000 people have crossed into DR Congo to the west, again on boats and sometimes walking for days. Some five and a half thousand people have sought shelter in Uganda. The violence erupted after the Burundi’s president Pierre Nkurunziza made the controversial decision to run for a third term.

“People were passing through the village, running away from the conflict. We were scared and like almost everyone, we grabbed our things and left,” Ndayankundwa said. “We have no place to live but I won’t go back. If there is peace and people start to go back, I will go back too. But right now there is no way I am going back.”

Hot meals and a ‘roof’ overhead

CRS and Caritas have added a medical doctor to the stretched teams of physicians from a number of international humanitarian agencies who are handling dozens of cases of watery diarrhea and cholera due to the poor living conditions at the stadium.

“We are also seeing and treating many patients for malaria,” noted Dr. Paul Mutani, who worked to ensure that patients in the clinic receive their meals regularly like everyone else, which sometimes wasn’t happening in the confusion of the refugee influx. In addition, some patients should be receiving special supplements to help them recover, he said.

Caritas Kigoma has hired a team of about 40 cooks who work in shifts around the clock, and 20 health promoters who were trained by two CRS WASH (water, sanitation and hygiene) experts and then deployed to ensure people are aware of the risk of disease in these crowded conditions and the importance of simple hygiene, especially regular hand washing.

As the lead agency on WASH, Caritas has trucked in water supplies and provided waste receptacles and solid waste removal from the stadium. The Kigoma diocese provided $5,000 to help the refugees. CRS Tanzania has so far released $50,000 in emergency funds to help in the immediate crisis, supporting both Caritas Kigoma and CRS’ own operations.

Onward to the final destination

After typically a day or two at the stadium, the refugees are transported by buses hired by the UN refugee agency, UNHCR, to a refugee camp approximately another 125 miles inland in Nyarugusu. The camp, once a constellation of six different camps providing shelter to refugees fleeing DR Congo, had been in the process of slowly shutting down as refugees could finally return home when peace seemed stable. Now, the camp is expanding again, with new tent cities cropping up next to the now full shelters at Nyarugusu.

CRS and Caritas Kigoma have done a WASH assessment at the camp and are looking to provide support for water, sanitation and hygiene for the new arrivals while also improving conditions for the refugee communities already there.

Now is the time to prepare

John Mutundo, the Secretary General of Caritas Kigoma, had words of caution as the refugee crisis in recent days seems to have entered a lull: “We are being told across the board to get ready now, because it is widely expected that this crisis could see a further and potentially quite sudden deterioration,” he said.

Indeed, while there are widespread reports of refugees repatriating to Burundi, many are urging caution as the situation is unpredictable in the run up to national elections scheduled for late June.

While refugee numbers hit a peak of about 112,000 in neighboring countries last week, UNHCR and partner agencies – including the national Caritas in DR Congo – have launched a regional plan to assist up to 200,000 refugees through the month of September.

That would be nearly double the number of refugees hosted at one time so far.

CRS and Caritas are helping some of the nearly 90,000 refugees from Burundi, the majority women and children, who have spilled over the borders into neighboring Tanzania, Rwanda, and the Democratic Republic of the Congo since violence erupted in their country in late April. END_OF_DOCUMENT_TOKEN_TO_BE_REPLACED