More than 80 million people around the world have been forced to flee their homes because of persecution, conflict, poverty and violence. There are more refugees and internally displaced people now than at any other time in history. This is truly a global humanitarian crisis. In this pivotal moment when COVID-19 is making displaced communities even more vulnerable, we remember that Church teaching encourages us to welcome foreigners seeking the security and livelihoods they cannot find in their home countries.

Who is a refugee?

A refugee is a person who has been forced to flee his or her country because of persecution, conflict or violence. On World Refugee Day—celebrated each year on June 20—we lift up the lives of millions of refugees and pledge our support for all who have been displaced around the world.

Two-thirds of all refugees come from only five countries: Syria, Afghanistan, South Sudan, Myanmar and Somalia.

People fleeing violence in Syria form the largest refugee group in the world today. Since the war began in 2011, more than half the Syrian population—13 million people—have been forcibly displaced. Despite experiencing such upheaval, Syrian refugees are rebuilding their livelihoods in their new communities with support from Catholic Relief Services and our partners.

In August 2017, more than 700,000 Rohingya refugees fled Myanmar for neighboring Bangladesh, expanding the country’s refugee population to nearly 1 million. Most of these refugees live at the Kutupalong Balukhali Expansion Site—the world’s most densely populated refugee settlement. CRS has been working with Caritas Bangladesh since the onset of the crisis to provide wide-ranging support including safe shelter for families, water, sanitation and hygiene supplies, and counseling and education for vulnerable women and children. 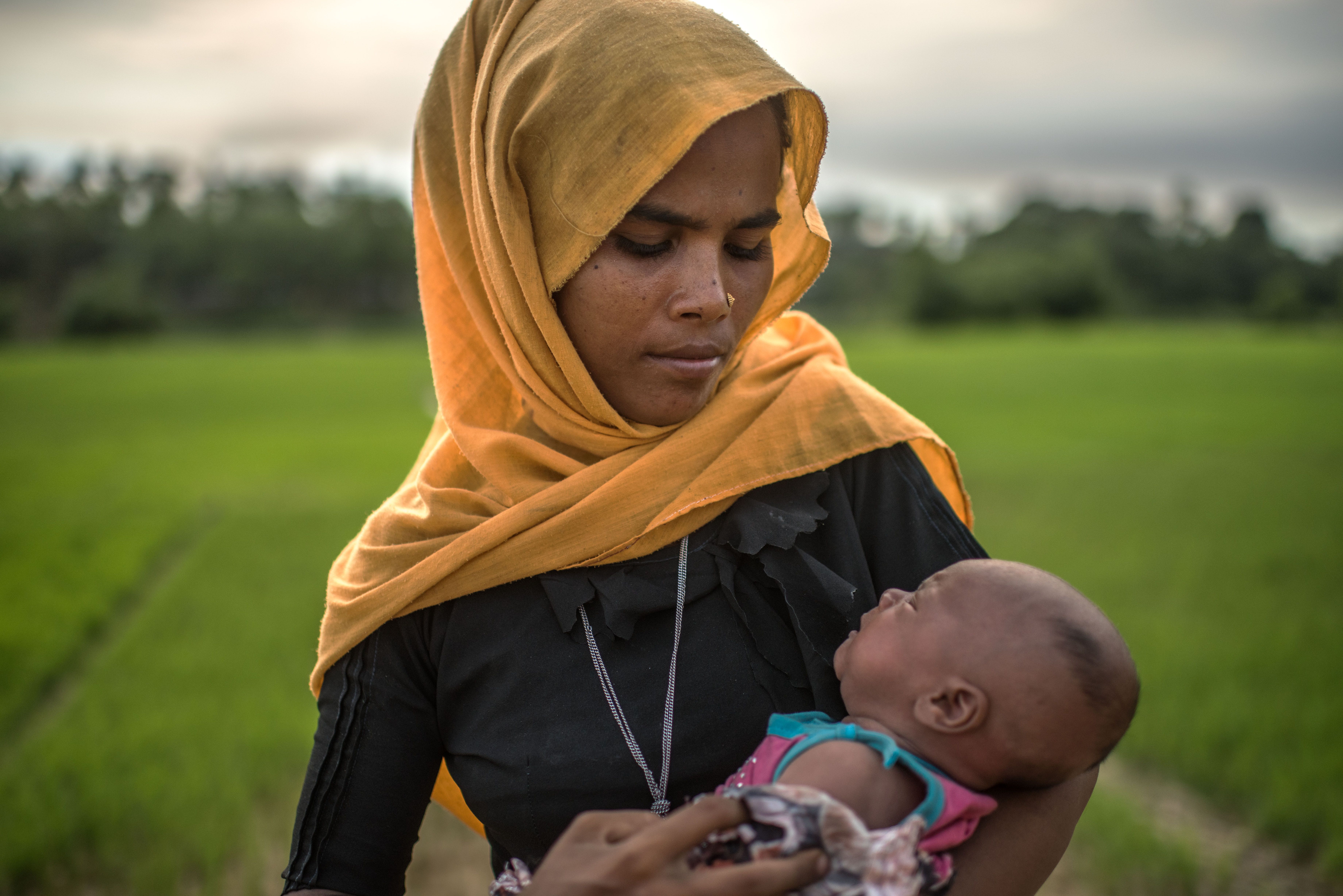 In Africa, it’s not just conflict that’s driving the displacement, but also the changing climate and hunger. Prolonged droughts, unpredictable flooding and crop failures are leaving families with little or nothing to eat—forcing them to sell their possessions, pull their children out of school and migrate in search of work. The COVID-19 pandemic has exacerbated the threat of hunger and put 14 countries at risk of deeper food insecurity.

In other parts of the world, the forces driving displacement have persisted for years. In Central America, crime and violence driven by drug cartels and gangs have made the number of people forced to flee their homes in search of safety grow by 10 times in the last five years. Many of those who have fled are children.

During this global pandemic, CRS is supporting refugees by educating communities about COVID-19, ensuring safe social distancing practices in our programming, installing handwashing stations and providing educational materials for refugee children while schools are closed.

More than 30,000 people are displaced every day. That is 30,000 unique and tragic stories of women, men and children seeking peace and hope. They need our prayers, compassion and support. 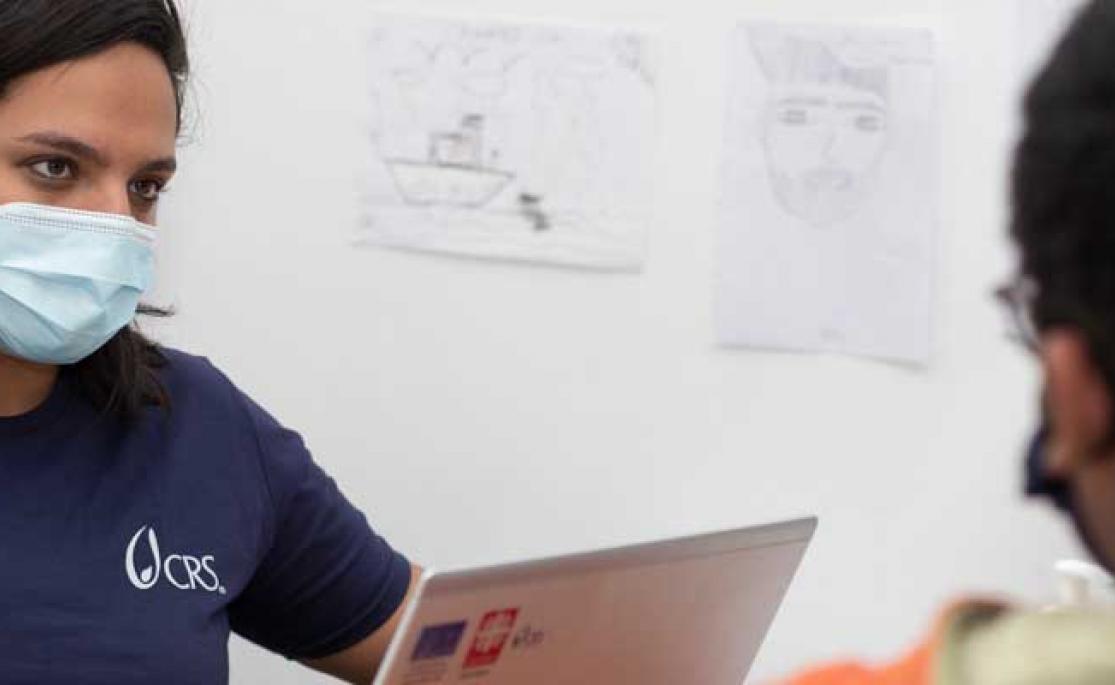 “The human tragedy that is forced migration is a global phenomenon today. This crisis which can be measured in numbers and statistics, we want instead to measure with names, stories, families.” 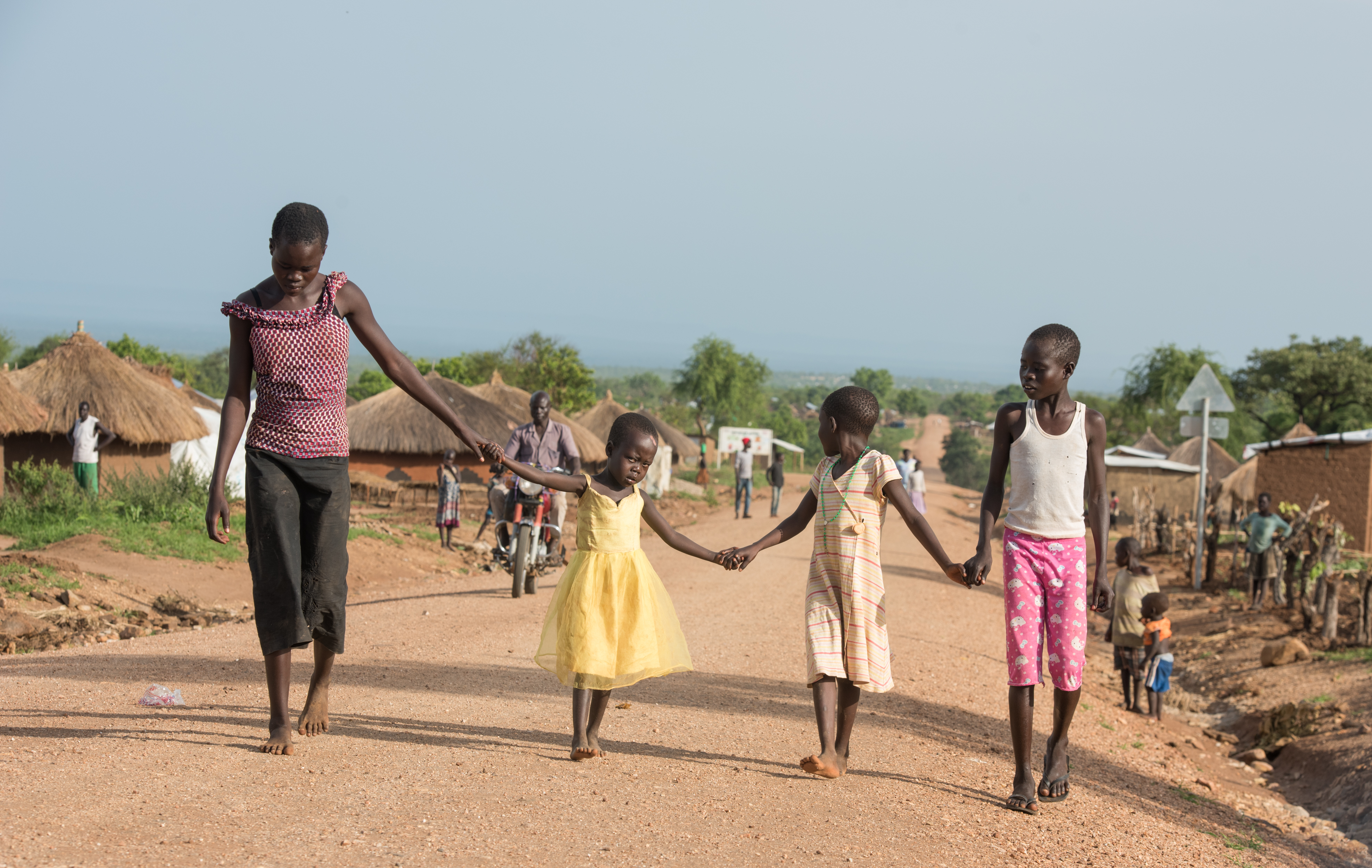 Annet wakes up in the morning and fetches water. She prepares porridge for 13-year-old Emmanuel, 8-year-old Irene, and 6-year-old Gladys, sweeps the compound, and cleans the house all before lunch, which she also prepares for the children. She is in charge of dinner and bath time, as well. Annet is only 16 years old and the head of her household in the Bidi Bidi Refugee Settlement in northeastern Uganda. In 2016, ongoing violence in South Sudan forced Annet to flee south with her siblings to neighboring Uganda. There, she joined the 230,000 people—most of them South Sudanese—who live in Bidi Bidi, making it the largest refugee settlement in the world. Around 86% of its residents are women and children.

“I think a refugee is someone who leaves a place with nothing,” says Annet, whose parents are deceased. Life in Bidi Bidi is challenging—especially for a young woman trying to raise three siblings. Shelter is precarious, as is human safety. Illness is a constant worry and frequent reality. Clean water and food are precious. Catholic Relief Services responds to this profound need by improving living conditions for people who have been displaced. At Bidi Bidi, CRS installed 1,194 latrines and built 1,226 safe shelters with windows and doors that lock—Annet and her siblings received one of each. And through CRS’ hands-on training and seed distribution, Annet has been able to feed her family by growing her own garden plot.

“My hope is to raise my siblings,” she says. “And I know I can do it with the help of CRS and my Catholic faith.” 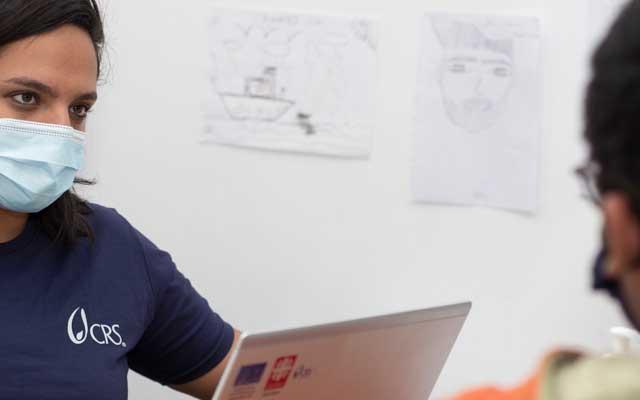 COVID-19’s Impact on Migrants and Refugees

COVID-19 has increased the vulnerability of displaced people. Learn how migrant and refugee communities are partnering with CRS to stay safe. 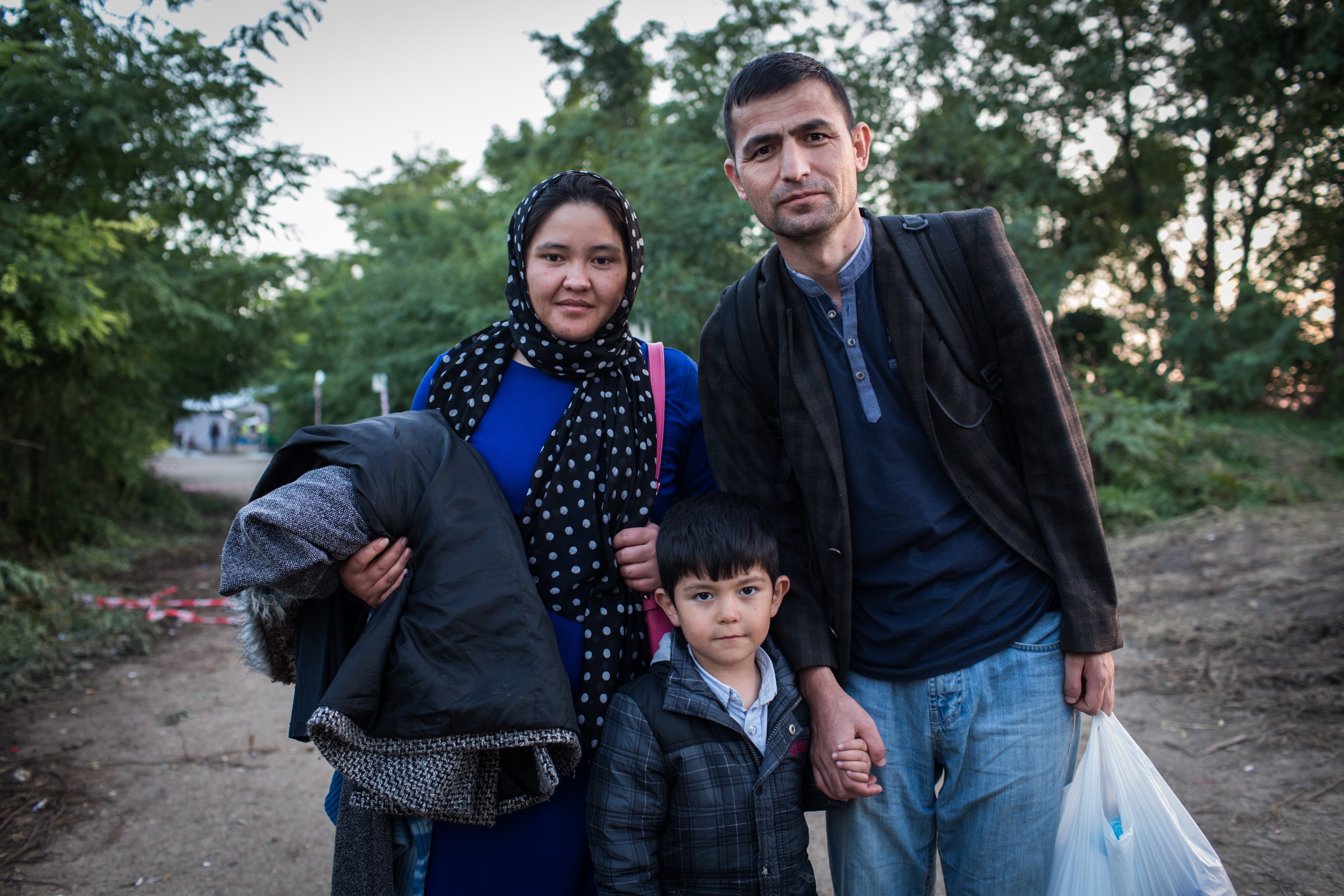 It’s estimated that more than 80 million people are displaced globally—including nearly 26 million refugees. This is the highest figure since World War II and a number that has far outpaced the international community’s ability to respond. CRS provides short- and long-term support to refugees, internally displaced populations and economic migrants. Your voice is needed to continue this lifesaving work. Urge your members of Congress to support funding in the federal budget that helps refugee families access clean water, food, shelter, medical care and other basic necessities.

Millions of our sisters and brothers are on the move around the world,  Not by choice, but by desperation.

For those forced to flee violence,  We pray they find safety.

For those seeking economic opportunity,  We pray they find secure livelihoods.

For those trying to support and protect their families,  We pray they find communities to embrace them.

For those searching for peace and hope,  We pray that we may be bearers of the Good News.

We are called to be prophetic advocates in this world.  To call out injustice and be heralds of Truth and Love.  We pray that all migrants, refugees and displaced persons  May find safe and loving communities  And the opportunity to thrive.  And we pray that we may have the courage to stand and act  In defense of human dignity for all our sisters and brothers in need. 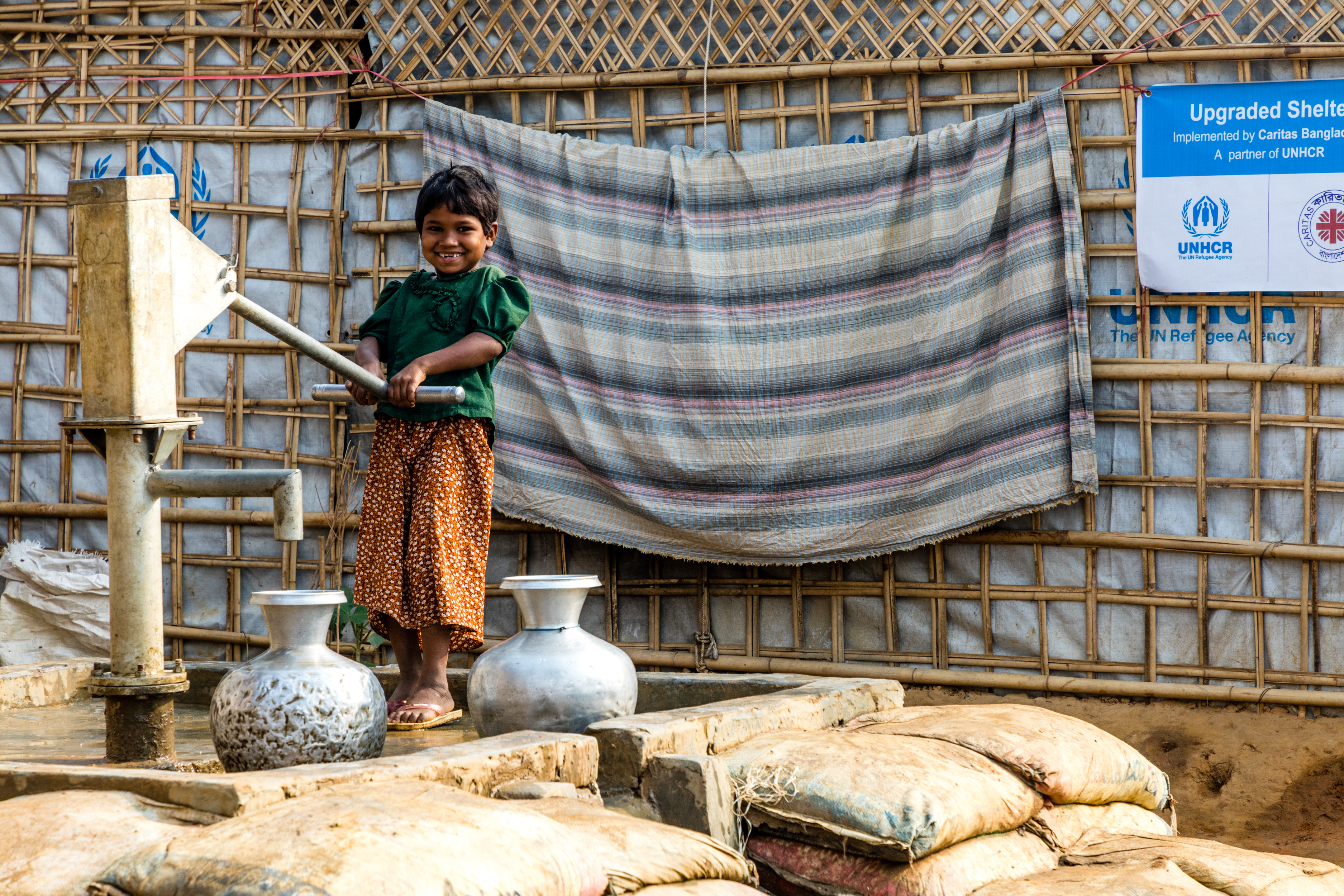 CRS supports refugees and others who have been displaced around the world with basic necessities like food, clean water, medical assistance, shelter and sanitation infrastructure. We also work with partners to provide education, counseling and job support so that families can heal and thrive. Make a gift today to continue making this lifesaving work possible.